Abandon Ship: Why Ukrainians are Leaving Their Country for Other Opportunities 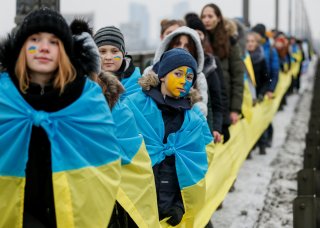 Ukraine’s accelerating population decline could have serious economic and geopolitical consequences for the Eastern European country in the coming decades, analysts warn.

In late January, the Ukrainian government caused a storm when it released a digital census whose results suggested that the country’s population had fallen far more significantly than previously imagined. The census found that there are 37.3 million people living in Ukraine—a decrease of 11.2 million people since the last official census was conducted in 2001. The figure also represents a considerable drop from Ukraine’s post-independence population of nearly 52 million people.

The digital census has admittedly not been without its critics. Dariia Mykhailyshyna, an economist at the Kyiv-based Center for Economic Strategy, told the National Interest that the government compiled their final population figure on the basis of SIM card data and registry data. The problem with such an approach, she explained, is that not everyone in Ukraine has a mobile phone and registry data is often incomplete and sometimes even includes deceased individuals.

Furthermore, the digital census lacked information covered by a traditional census, such as socio-economic data from households or statistics on the country’s ethnolinguistic composition, Mykhailyshyna added.

Yet despite the issues surrounding the digital census, its final figure for the size of Ukraine’s population is likely fairly accurate, said Denys Kiryukhin, a research scholar at the Ukrainian National Academy of Sciences’ Skovoroda Institute of Philosophy.

“With a high degree of probability, it reflects a situation extremely close to reality,” he said. “At least on the basis of approximate estimates of migration and voting data during the parliamentary and presidential elections, we can assume that the population of Ukraine at the moment is from thirty-seven to forty million people.”

Although other surveys by the Ukrainian State Statistics Service put forward a higher population count than the digital census does, they too document a significant decline in the country’s population since independence. Last November, the service reported that Ukraine’s population was 41.94 million people, with the country losing 212,000 people in just ten months.

International organizations warn that Ukraine’s demographic decline is likely to continue over the coming decades. Recent demographic projections from the United Nations predict that Ukraine’s population will shrink by almost 20 percent between 2020 and 2050, the fourth-largest population decline in the world during that time period. Only Bulgaria, Latvia, and Lithuania are expected to experience larger population declines over the next thirty years.

The impacts of mass migration are no less noticeable. In just the past decade, 3.8 million Ukrainians have left the country. Another nine million Ukrainians regularly work abroad for some part of the year. In February 2018, then Foreign Minister Pavel Klimkin revealed that close to one hundred thousand people were leaving Ukraine each month.

Such statistics have alarmed Ukrainian officials, some of whom have referred to this exodus as a “migration tsunami” and “one of the greatest threats facing Ukraine after military aggression.”

Although the instability created by the war in eastern Ukraine has helped fueled mass migration, the main reason why many Ukrainians are leaving their homeland are structural economic problems that precede the conflict, explained Oleksiy Kusch, an economist at the Growford Institute in Kyiv.

"What plays a decisive role in people going abroad is the lack of basic factors necessary for a decent standard of life - things like safety, quality medical care, quality education, and prospects for receiving pensions," he said.

In 2018, the International Monetary Fund ranked Ukraine as Europe's poorest country. Meanwhile, anti-corruption watchdog Transparency International has rated Ukraine as 126th out of 180 nations in its latest annual ranking of countries by perceived levels of government corruption.

Socioeconomic conditions within the country are also to blame for Ukraine’s low birth rates and high mortality rates, Kusch asserted. He told the National Interest that “the falling birth is due to an unwillingness by Ukrainians to give birth to children in the circumstances they now live in.” Ukraine’s high mortality rates, on the other hand, Kusch contended, were driven by a failure of the healthcare system to diagnose many diseases properly in time.

Another reason for Ukraine’s fall in population: territorial loss. Before 2014, Crimea had two million residents and close to six million people lived in the Donetsk and Luhansk regions. Since the Kremlin’s annexation of Crimea and the outbreak of war in eastern Ukraine, however, Ukrainian authorities have stopped counting the inhabitants of these regions for their population statistics.

The end result of Ukraine’s demographic decline is not just a smaller population, but also an aging one. In 2013, the Ukrainian State Statistics Service reported that there were 339 pensioners per one thousand people ages sixteen to fifty-nine. That number had risen to 389 in 2019. By some estimates, there is only one working-age Ukrainian joining the domestic labor market for every three or four older citizens that are retiring.

The Ukrainian experts interviewed by the National Interest warned that continued population decline could cause serious harm to the Ukrainian economy in the long run. In particular, further declines in Ukraine’s working-age population would decrease labor productivity while also increasing financial pressure on the healthcare and pension systems, Kiryukhin said.

“Ultimately, this should lead to an increase in government borrowing and a slowdown in economic growth, and, ultimately, to an impoverishment of the population,” he added.

The pension system is in particular danger of coming under strain from the demographic burden of Ukraine’s aging population, Mykhailyshyna explained.

“There is a serious threat for the future, because if there are more retired people and fewer people working, then there won't be enough taxes to pay for the pensions of all the people who are retired,” she said.

But Ukraine’s budgets are not the only thing likely to suffer as a result of its dwindled population. Kusch expressed concern that demographic decline would leave Ukraine more vulnerable against Russia and even more dependent on the West for security.

"Our current abilities to push back against Russia are already limited due to our economic potential, and as our economic potential worsens so does our ability to resist,” he said. “Such a scenario will increase the demand for some sort of international mechanisms that could guarantee our security, but such mechanisms are most likely not forthcoming.”

“The biggest danger for us is that Ukraine could end up as an item in some future global consensus between Russia and the West—one that will be unfavorable toward Ukraine,” Kusch added.

The Ukrainian government has begun taking some initial steps to combat the country’s demographic freefall. In December, Ukrainian president Volodymyr Zelensky launched a program that offered loans for Ukrainians living abroad to return home and start a business there.

Zelensky’s new initiative is a good start, said Inna Volosevych, deputy director of the Info Sapiens research agency. She told the National Interest that the government should also consider instituting programs aimed at attracting immigrants, economic deregulation, and pension reform to help ease the financial burdens from a smaller population and to encourage Ukrainians abroad to move back.

But other experts are more pessimistic about the government’s ability to prevent a future demographic crisis. Kiryukhin told the National Interest that absent major reforms, which he deemed unlikely, the problem will only get worse.

“The problem is systemic and cannot be solved by separate programs,” he said. “We need to radically improve the social and economic situation in the country, but the government is not able to do this.”