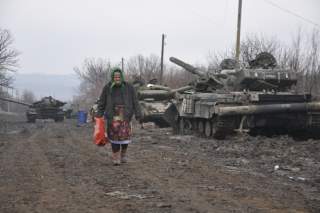 Growing up in Horlivka, Ukraine, I never took to public holidays. Celebrations of religious holidays seemed too pagan and pretentious, while others lacked a sense of purpose, besides offering an excuse to eat, drink and be merry. Regardless of what many of the holidays commemorated, they did create a sense of culture and social identity—essential to any society’s existence.

The only holiday that seemed to unite everyone was Victory Day on May 9. On this day, not only Ukrainians, but people across the post-Soviet space, commemorate victory in World War II and the “Great Patriotic War,” a term used to describe the war during June 22, 1941 to May 9, 1945 along eastern fronts of World War II fought between the Soviet Union and Nazi Germany.

With its teary-eyed veterans, colorful parades, flowers, balloons, patriotic songs and war movies Victory Day had always been a day like no other. This was perhaps one of the rare occasions when I would bring flowers to my grandparents and listen to my grandfather’s war stories for the umpteenth time—but they always sounded new and exciting. His typically stern and unreadable face would light up, and he would beam with excitement like a child getting to recite his favorite scene from an action movie.

Over the last year, my grandfather’s enthusiasm to talk to his granddaughter living in the United States seemed to have dwindled. When I talk to my grandmother on the phone, I can hear him in the background, “Is that America calling? Ask her to tell Obama to stop bombing us.” With my grandmother trying to change the subject, the calls inevitably end with my grandfather’s forceful insertion, “Say hello to Obama,”—an ironic and troubling echo of “Thanks, Obama”—to which my grandfather is rightfully oblivious.

Recently, I called to wish my mother, who still remains in rebel-occupied Horlivka, a happy birthday. Naively, I asked her if she had enjoyed the celebration. Her voice shaking, she said there was little to celebrate. She proceeded to inform me that the new ban on Soviet symbols, which effectively prohibited celebration of the upcoming WWII Victory Day, had left everyone angry and bewildered. “Your grandfather is not taking it well,” said my Mom.

On April 9, 2015, the Ukrainian Parliament voted to ban Soviet symbols, a move that further exacerbated the country’s divisions. The package of bills was largely drawn up by the head of the Institute for National Remembrance, Volodymyr Viatrovych, widely known for his strong support for the controversial nationalist leaders Stepan Bandera and Roman Shukhevych. The bill replaced May 9 Victory Day with the May 8 Day of Memory and Reconciliation. It also criminalized the term “Great Patriotic War,” effectively making almost all war movies, songs, and literature illegal.

The government’s zeal for shedding the Soviet past is understandable. But the problem with removing Victory Day and denying the existence of the Great Patriotic War is that it destroys the sense of pride in collective accomplishment that has for so long been a source of culture and identity for Ukrainian people. National identity is often described as a perception of a common past, present, and future. Thus, people often look into the past for sources of social identity, especially when the present and the future become particularly murky.

For many Ukrainians, the Great Patriotic War is not an artifact of Soviet ideology; it is an example of a commemoration of a great collective achievement that cost the lives of many of our ancestors and deserves to be cherished and preserved. And this is true not just for Russian-speaking Ukrainians in the east. A recent survey conducted by the authoritative Democratic Initiatives Foundation and Ukrainian Sociology Service on what unites and divides Ukrainians found that in their attitude to historical events, Ukrainians were most united in their positive view of the victory of the Soviet Union in the war from 1941-1945 against Nazi Germany (84 percent). Across all regions, Ukrainians also demonstrated a unity of views on such events as Ukraine’s declaration of independence (71 percent) and national liberation movement under the leadership of Bohdan Khmelnitsky (69 percent). Khmelnytsky was a Ukrainian leader, who in 1648-1657 organized an uprising against Polish rule in Ukraine, which ultimately led to the transfer of eastern Ukraine from Polish to Russian control.

Stripped of the present and the future, eastern Ukrainians need their historical past to fill the voids of the present and uncertainty of the future. Death, dislocation, and destruction have caused enough anguish and confusion in the region. Being denied all sources of their identity has set people into yet another unimaginable crisis, a point at which “habitual reactions are no longer adequate and previous experiences provide no guidance.”

Of course, crises bring fundamental changes that call old dogmas into question. They force us to critically examine our present reality and to reevaluate our previous opinions and beliefs about the past. And the Ukraine war has certainly done this.

Yet denying people their history can create a different sort of crisis by destroying people’s sense of belonging and threatening the unity created by shared principles and memories. We should be aware of this even if politicians engaged in manipulating history for their own ends are not. Their short-run agenda and the long-run interests of society do not always align. This is why the Ukrainian leaders’ effort to strip people of their history and the symbols is short-sighted and poorly-timed.

First, they labeled everyone who lives in rebel-controlled areas as “terrorists” and cut them off from financial aid. In September 2014, President Petro Poroshenko and Prime Minister Arseniy Yatsenyuk cancelled government benefits for residents living in separatist-controlled areas. Yatsenyuk said, “The government will not finance terrorists and impostors.” Since younger, healthier and more financially stable individuals who had opportunities to immigrate had already done so, these cuts affected the most vulnerable people: the poor, old, and sick, fuelling resentment among those fated to be stuck behind separatist lines.

People felt abandoned, humiliated and lost. Most (especially older generations) have worked for the government their entire lives contributing to their retirement funds by paying heavy taxes. They are now being denied their hard-earned savings. One would think that if the government cut off one of its territories as a gangrene-infected limb, at the very least, it owed hundreds of thousands of “uninfected” people living in those areas help to relocate and survive.

Instead, in January 2015, the Kyiv government introduced a travel ban: they installed new check points and the quagmire of paperwork they required made it harder for people from rebel-occupied territories to travel, sometimes just a few miles down the road, to get access to basic necessities, such as banking and groceries. This policy raised concerns among aid organizations, who warned that a medical crisis could be brewing as the Ukrainian authorities refused to let even essential medical supplies through.

This was the context in which the ban of Soviet symbols and the Great Patriotic War appeared. It made the one thing that remained familiar—the cherished past—no longer acceptable. My mother’s reaction was typical. “I am shocked and confused,” she said.

One in four Ukrainians was killed in World War II and every single family suffered a loss of some kind. Under the leadership of a less than perfect Soviet government, the survivors dedicated their lives to honoring the deceased and restoring the country. My family, along with many others, worked their entire lives to rebuild postwar Ukraine (both sets of my grandparents and my father worked in the railway). They dutifully paid their taxes. Now they are being denied the fruits of their labor and the memories they hold dear and embraced as Ukrainians.

We must always reevaluate and debate our Soviet history, but we must do it for the right reasons and with care. The ban on commemorating the Great Patriotic War was act of defiance against Russia and an expression of Ukraine’s aspirations to be “European.” But many in eastern Ukraine regard it as an attempt to deny history in order to smack Putin’s face and to please Europe. In their eyes, the Ukrainian government is no better than the Russian government they are defying. If Moscow is using the past for his own ends, they believe, so is Kyiv.

According to the Kiev International Institute of Sociology, in December 2014, only 15.6 percent of people in Donbas (and 11.4 percent in other eastern regions) considered DNR and LNR legitimate governments, with the overwhelming majority not recognizing them as legitimate. Just a few months later, there was a noticeable growth in public support for the rebels: in March 2015, approximately 43.1 percent of Donbas’ population deemed the DNR and LNR legitimate—the largest proportion compared to 38.2 percent who viewed the separatist governments as illegitimate and 32 percent who hesitated to respond either way.