Abe's Party Power Could Be at Risk in the Upcoming Election 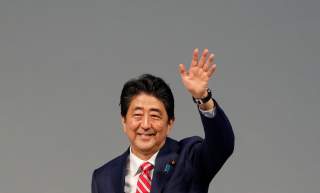 Japanese prime minister Shinzo Abe’s surprise decision to call an early election on October 22 appeared to be another shrewd move from a skilled political operator. But while he should still be in power to welcome President Donald Trump’s inaugural Asia visit next month, the prospects of a two-thirds parliamentary majority for Abe’s coalition could be dented by another politician full of surprises: Yuriko Koike.

Abe is Japan’s third longest-serving postwar politician. His prospects of extending his political longevity even further appeared bright when he announced the snap election.

“I’ll demonstrate strong leadership and stand at the forefront to face a national crisis,” Abe said in reference to the North Korean crisis and Japan’s demographic challenge when he told reporters about the snap election on September 25.

“This is my responsibility as leader and my mission as prime minister.”

Abe also pledged to redirect revenue from a planned consumption tax hike in 2019 toward child care and education, helping to offset some of the negative economic effects. Previous increases to the consumption tax have prompted the world’s third-largest economy tumble into a recession.

“We will turn Japan’s social security system into one that responds to all generations by boldly diverting policy resources to resolve the two major concerns—child rearing and nursing care—that working generations confront,” he said.

The center-right leader seeks to capitalize on disunity in the opposition parties, to improve economic outlook and to rebound in the opinion polls by calling for a snap election more than a year ahead of schedule.

Since assuming office in November 2012, Abe’s approval rating has remained relatively high—above 50 percent for much of his term. However, a string of influence-peddling scandals saw this slump to the 30 percent range over summer, sparking speculation over his possible replacement.

However, Pyongyang’s missile and nuclear tests changed the political atmosphere and helped spark a rebound in Abe’s support to back above 50 percent. Abe has talked tough on North Korea, saying that “dialogue for the purpose of dialogue is meaningless” and urging strict enforcement of sanctions.

With the main opposition Democratic Party of Japan (DPJ) replacing its leader in early September, the stars appeared aligned for Abe’s Liberal Democratic Party (LDP) and coalition partner, the Buddhist-backed Komeito, to secure an easy election win. They will likely maintain their two-thirds majority and allow for the prospect of constitutional reform, such as legitimizing Japan’s defense forces.

But that all changed when popular Tokyo governor Yuriko Koike stole Abe’s thunder when she announced on September 25 that she intended to launch her own national political party, known as the Party of Hope.

“When you look at the world, bold reforms are taking place everywhere—Japan is lagging behind,” she said.

“I believe Japan needs a real reform-minded force,” she added.

A former LDP lawmaker and defense minister, Koike’s rise as governor has fuelled speculation that she could become the nation’s first female prime minister. While Koike would have to resign as governor to contest a seat in the national election, a move she has rejected, the October poll is increasingly being viewed as a contest between Abe and Koike.

On September 28, Koike’s new party received a boost when DPJ leader Seiji Maehara urged party members to stand as candidates for Koike’s party, not his own, in a de facto merger of opposition forces.

“No matter what it takes, we must stop the Abe government,” Maehara told DPJ members, adding that they should “choose substance over appearance.”

Koike praised Maehara’s decision, saying she intended to field “as many candidates as possible” in the October poll. Before the move, Koike’s fledgling party had eleven seats in the lower house compared to the DPJ’s eighty-eight seats, in contrast with the 288 seats held by Abe’s LDP and Komeito’s thirty-five seats.

Not all DPJ members are expected to stand under Koike’s banner, however, with the Tokyo governor saying she had “no intention” of accepting candidates who did not support her policies, which include revising the constitution.

Other left-wing opposition parties have backed away from supporting Koike. The Japanese Communist Party has described the Party of Hope as “nothing more than a spinoff” from the ruling LDP, while the Social Democratic Party plans to field shared candidates with the communists.

The apparent disunity could split the opposition vote, according to Japan’s Nikkei newspaper.

Of the Diet’s total of 465 seats, Abe has set the bar for election victory at 233, which is the minimum number required for a coalition majority in the lower house. However, any significant loss of seats could weaken the prime minister’s position.

“The real threat that Koike poses to Abe is not that she might overthrow his coalition, but that her party might contribute to a large, embarrassing loss of the coalition’s seats,” Eurasia Group’s Scott Seaman told CNBC. “This, in turn, could fuel pressure on him to step down either immediately or derail his efforts to win a third term as LDP president next year.”

Early polls have shown that the LDP remains the favorite. An Asahi newspaper survey gave the LDP 32 percent support against Party of Hope’s 13 percent, while a Mainichi poll had Abe’s party at 29 percent versus 18 percent for Koike’s.

In addition to the difficulty of fielding sufficient candidates, Koike faces the barrier of lacking a support base outside the capital, as well as not standing personally in the race, sparking criticism of her apparently divided duties between Tokyo governor and party leader.

Memories remain fresh of the DPJ’s rocky stint in power from 2009 to 2012, in which divisions between its left and right wings, the Fukushima crisis, a faltering economy and the revolving door of leaders led voters to abandon it in droves.

The LDP’s record of winning the most votes in nineteen of the last twenty lower house elections makes it a formidable opponent for any challenger from the left or right.

In contrast, Abe’s LDP represents a “safe pair of hands” amid the growing threat posed by “Rocket Man” Kim Jong-un of communist North Korea. The prime minister can also point to an improving economy—which is currently enjoying its longest expansion since 2006—amid low employment and rising wages.

“Back in the 1990s, there was another surge of new parties,” Abe said on September 29 while campaigning. “What did that bring us? Political chaos and economic stagnation.”

Financial markets are expected to be impacted by poll results, with significant gains by Koike potentially hitting the Japanese yen and the nation’s fiscal-reform efforts. Koike has called for the planned consumption tax hike to be suspended and for nuclear power to be phased out, contrasting with the LDP’s tax plan and its policy of having nuclear account for 22 percent of the nation’s electricity mix by 2030.

“If, as is widely expected, her new national party can gain around 40-60 seats in the upcoming [election], her ‘Koikenomics’ is poised to re-energize ‘Abenomics,’” Koll said in a September 27 report.

Koll pointed to Koike’s push for lower corporate and income taxes, deregulatory reform, increased privatization, administrative and other reforms as evidence of her approach.

“Indeed, the potential for an all-out coalition between Abe’s LDP and Koike’s Party of Hope cannot be ruled out as both party leaders share not only a basics pro-growth economic policy agenda but also a deep-rooted patriotism,” the Tokyo-based economist said.

Koike and Abe share similar views on defense and foreign policy, ensuring U.S. security ties will remain at the heart of the new administration.

For Abe though, his push to become the nation’s longest-serving leader and achieve a cherished ambition of reforming Japan’s pacifist constitution now faces a potential stumbling block. Anything but a decisive victory against Koike’s party could spell trouble ahead, although the political veteran has faced down challengers before.

Come November, Trump can still expect to be welcomed by Abe.