As Adversaries Test America, We Need a Leader Who Is Tested 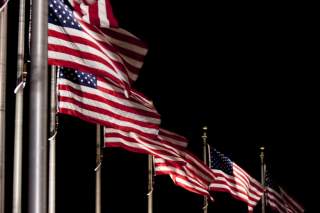 America and its allies who embrace and defend freedom are being continually challenged. With each passing day, it seems the world becomes an even more dangerous and violent place.

Under the Obama-Clinton administration foreign-policy doctrine of retreat and disengagement, of "leading from behind," our allies no longer trust us and our adversaries no longer fear us.

To turn the tide, America needs a president who embodies the leadership qualities of Ronald Reagan and Winston Churchill—someone who will not be intimidated by international bullies who suppress and conquer. We need a leader who will stand up and say enough is enough.

There is no hope that such a president will emerge from the field of Democratic hopefuls. President Obama’s Secretary of State Hillary Clinton will continue Obama’s status-quo of appeasement and weakness. Like President Obama, Clinton will indeed continue to "lead from behind" and retreat in the face of challenges.

On the Republican side, Governor Scott Walker stands out as a proven leader of strength, intellect and principle. Walker has been tested like no other candidate in the GOP field of today. When one hundred thousand loud and disruptive protesters descended upon Wisconsin’s Capitol to oppose Walker’s collective bargaining reforms, he remained unintimidated and did what was right for the state. This type of resolve is exactly what’s missing from Washington in dealing with foreign leaders bent on bullying and intimidating our nation.

Walker’s resolve differentiates him from not only Obama and Clinton, but also other Republican candidates. When Governor Walker boldly stated that he would terminate the terrible Iran nuclear deal on day one of his presidency, one of his leading GOP competitors demurred, claiming that he would first need briefings and a secretary of state confirmed before he could take any action.

Walker didn’t need to be advised that the Obama-Clinton Iran deal is a disaster for America and our allies. His stand was a Reaganesque and Churchillian response to craven appeasement that would rally our nation and our allies.

Walker’s policy of peace through strength would be the antidote to a number of brewing foreign-policy crises brought on by the disastrous Obama-Clinton doctrine.

Vladimir Putin’s offensive against Ukraine is an exploitation of the lack of leadership and the international disengagement we’ve seen under this administration. Governor Walker knows Putin is operating under Vladimir Lenin’s old principle: probe with bayonets, and where there’s mush, push; where there’s steel, stop. Putin clearly believes that he has found mush under President Obama and Secretary Clinton, and he is pushing hard.

By failing to secure a status of forces agreement, President Obama squandered our hard-fought gains in Iraq against the advice of his military commanders, creating the power vacuum ISIS has rushed to fill. He then called ISIS “the JV squad,” dismissing this burgeoning army of jihadists as something America should simply ignore. Now, responding to the alarm of the public, President Obama is following what would be Hillary Clinton’s policy if she is elected: running a military campaign bound by arbitrary political restrictions that forces our military to fight with one hand tied behind its back. Gov. Walker understands such a tactic is nothing but an exercise in futility, as it only puts U.S. blood and treasure at risk while ensuring ISIS’s survival. Gov. Walker would never commit our troops to conflict without a clear strategy for victory—something the Obama-Clinton ISIS approach is missing.

Another pivotal area of concern where U.S. action is lacking is Asia. Finding no credible U.S. opposition, China is claiming sovereignty over almost the entire South China Sea and backing up its claim with a major naval and military buildup, including the construction of man-made islands, as well as air and naval bases throughout the region. Beyond its push into the South China Sea, China’s military unit for cyberwarfare has attacked the U.S. government’s Office of Personnel Management, stealing the personal and family information of millions of our military personnel and civilian employees. Gov. Walker would hold China’s leaders accountable for these attempts to undermine American interests. President Obama, however, is preparing to honor Chinese president Xi Jinping with an official state dinner, a privilege that most heads of state of American allies have not enjoyed. On Monday, Walker called for that visit to be cancelled. Senator Tom Cotton, who has quickly become a leading voice on national-security issues, endorsed Walker's call. Every serious GOP would-be nominee ought to unite around this demand.

It’s no coincidence that our world is descending into chaos at the same time our military is being more than decimated. President Obama has overseen dangerous cuts to our military that threaten the ability of our armed forces to carry out missions. Gov. Walker knows this weakening of our national defense only invites aggression, and as president he would restore our nation’s military capability.

Across the globe, this administration displays weakness and disengagement. The autocrats and thugs who hate us and our values are taking full advantage, openly seeking to broaden their influence and impose their will on others in the absence of American leadership.

Scott Walker is running for president to reverse this unfortunate trend and make America safer. This will be no easy task. After getting their way for eight years under Obama and Clinton, autocrats and thugs alike will test the next president. But Walker has been tested before. Scott Walker does not back down from the tough fights and challenges. Instead, he embraces his role as a leader and delivers winning results. That is the type of leader America needs in the White House and on the world stage, and that is why I am supporting Scott Walker for president.

Robert O’Brien is an attorney and a senior foreign policy advisor for Scott Walker for America. He can be followed on Twitter: @robertcobrien.