Af-Pak, India and Beyond: The New Underpinnings of Washington's South Asia Policy 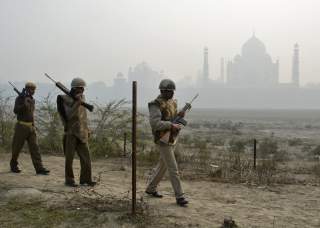 Strategic circles in South Asia have been obsessed with Washington since August 21, when President Trump addressed the nation from the Fort Myer military base in Arlington, Virginia, and laid out America’s military plans for Afghanistan. The speech had been interpreted as his vision for South Asia, given the Af-Pak dynamic and the potential role he envisaged for India to play in stabilizing her neighborhood.

Describing India as a “key security and economic partner of the United States,” Trump expressed his vision to elevate India as a key stakeholder in the Af-Pak issue. A recent estimate by Anthony Cordesman of Center for Strategic and International Studies pegs the total cost of the sixteen-year-long war at $841 billion, along with 2,400 soldiers killed. It was in this regard that the president, for the first time, repeatedly stressed that sixteen years had passed and yet the Afghan imbroglio was far from being resolved. The consistency in the new administration’s stance on the Af-Pak imbroglio is too serious to be ignored.

Ever since President Trump assumed power, Indo-U.S. relationship has got the much needed push across the entire spectrum of factors that drive the bilateral relationship. Prime Minister Modi’s U.S. visit in June was dubbed successful not only in the domain of tangible achievements—such as the Guardian drone deal and a joint statement pointing towards strong future defense cooperation and anti-terror initiatives—but also in terms of the chemistry the two leaders shared. New Delhi is decked up for welcoming Ivanka Trump in November.

Washington has sent strong signals to acknowledge India’s long pending grievance of fixing accountability on the non-state actors operating out of Pakistani soil without impunity. Prime Minister Modi’s visit coincided with U.S. State Department’s declaration of Syed Salahuddin as a global terrorist. On Salahuddin, the State Department report stated that he “vowed to block any peaceful resolution to the Kashmir conflict, threatened to train more Kashmiri suicide bombers, and vowed to turn the Kashmir Valley into a graveyard for Indian forces.” While it is true that merely designating him a terrorist would not do much to curb Hizbul Mujahideen’s menace in the valley, such gestures are a part of the broader bilateral-strategic interface and set the stage for future cooperation in respective dimensions. Two months after blacklisting Salahuddin, the Hizbul Mujahideen was also declared as a terrorist outfit by Trump administration.

Often missed in the larger debate on America’s South Asia policy is how it is moving beyond the Af-Pak narrative and addressing other crucial issues besides terror. Numerous other initiatives include reaching out to Pakistan’s Muhajirs, big-ticket projects for Nepal’s development and the recent attempts to address issues of Maldives and Sri Lanka.

As Pakistan completed its seventy years of its formation, the goal of integrating Pakistanis into one social fabric becomes more challenging as years go by. It is imperative highlighting this statement not from the perspective of an Indo-Pak rivalry, but due to the fact that the task of assimilating only subcontinent’s Muslims—which would rather be an easier task relative to India’s case—is only getting tougher.

Of all the challenges Pakistan has witnessed in its path towards nation-building, the case of the Mujahir community looms large since it was the Mujahirs which were at the forefront of Pakistan movement.

The ongoing crackdown on Muhajirs in Karachi has not gone unnoticed by Washington and Republican leaders have reached out to MQM’s senior exiled leaders. More than two decades into his exile, MQM founder Altaf Hussain’s popularity remains unchallenged. Pakistani establishment has engineered multiple splits and defections of MQM’s senior leaders but all efforts have gone in vain and Karachi’s Muhajirs have continued to repose faith in Hussain, who continues to reach out to his supporters from London.

In last couple of months, a couple of programs have been organized to bring the voices of Muhajirs to the centrestage. In June, MQM’s convener and a close confidante of Altaf Hussain, Nadeem Nusrat, met Sen. John McCain and briefed him about the crackdown on his party members by Pakistan’s security forces in Karachi. Nusrat told McCain, who is the chairman of the Senate Armed Services Committee, how MQM faced suppression at the hands of the Pakistani establishment—whereas radical outfits continue to operate in the city. The purpose of highlighting this engagement with Muhajirs is to show that Washington is ready to engage with multiple stakeholders that could potentially hold the key to a stable Pakistan.

Reaching out to Nepal

Washington’s recent focus on Nepal move probably comes as a response to the increasing inroads that the Chinese are making into Nepal. China’s big-ticket projects include the revamp of road and railways infrastructure, the Lumbini project, developing seamless connectivity and extending railways from Tibet to the Kerung border (from where the One Belt, One Road initiative shall enter Nepal), and further deeper into Lumbini (near the India-Nepal border in southern Nepal).

Recently, a $500 million has been announced for Nepal to assist the nation in its developmental efforts. As per reports, the fund has been made available by Millennium Challenge Corporation and would be utilized to build an electricity transmission network and construct three hundred kilometers of roads. The timing of this announcement is crucial as it comes shortly before Nepal’s deputy prime minister and external affairs minister who are set to hold talks over OBOR in Beijing.

The Maldives is a tiny yet strategically located island in the Indian Ocean with a growing instability under Abdulla Yameen’s regime, which has not gone unnoticed by Washington. While the political scenario in the island is being characterized by rising religious extremism and suppression of opposition parties, the administration is attempting to balance it by giving Chinese projects a free run to compensate the deteriorating political situation by providing economic stability. Acting Assistant Secretary of State for South and Central Asian Affairs Alice Wells expressed concerns regarding the status of rule of law and democracy in the island nation. The statement comes four months after Washington announced an 86 percent reduction in aid for Maldives (along with those for Sri Lanka and Bangladesh) as a part of overall reductions in external commitments, which also generated speculation about the retreating role of United States in South Asia.

The state of affairs in Sri Lanka, especially after the Hambantota episode, is worrying. Pointing at the recent sale of 70 percent of Hambantota port to a Chinese port development firm, Wells remarked that “China is providing non-concessional loans that promote unsustainable debt burdens, which I think are increasingly now of concern to the Sri Lankan people in the government. But what we bring to our relationship are multiple tools.”

These developments point towards a realization that American national interest also lies in reaching out to the smallest of the nations and external dimensions are as crucial to “America First” as its domestic concerns. The overlap of common interests with India in American approach towards South Asia must be exploited to the fullest potential.

Puneet Ahluwalia is a consultant at The Livingston Group and a member of the Virginia Republican Party’s State Central Committee.