An Afghan Settlement Will Require America to Work with Russia, Iran and Pakistan 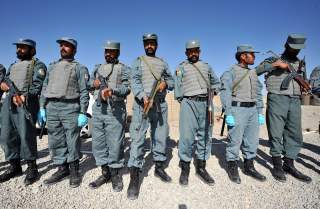 The recent spate of horrific bombings in Kabul has once again highlighted the urgent need for a coherent U.S. strategy to reverse the rapidly deteriorating security situation in Afghanistan. President Trump’s aides have reportedly asked him to consider additional troops and expanded authorities for the U.S. military to address the problem. His approval will send an important signal of U.S. recommitment to Afghanistan. But this move, even if only aimed at strengthening the United States’ hand in an eventual negotiation with the Taliban, may also lead Afghanistan’s neighbors opposed to long-term U.S. military presence to double down on resisting the United States. Pakistan’s negative role—and increasingly the roles of Russia and Iran—is already helping to sustain the Taliban. Their further support to the insurgency could tip the balance decisively in the Taliban’s favor.

To succeed in Afghanistan, the United States needs to get these regional spoilers to instead back the United States’ desired end state of a Taliban sworn to peace and willing to operate within the Afghan constitutional framework.

This requires the United States to create the right incentives for these countries to support American interests in Afghanistan. To do so, U.S. policymakers should work with the Afghan government to prioritize a peace process with the Taliban that accommodates the concerns of these states. This approach seeks to change the regional calculus in the United States’ favor by putting Washington in a position to leverage the collective weight of the region to push the Taliban to agree to an early end to the war. It would save the U.S. taxpayers billions of additional dollars that a protracted war would expend, and would allow the U.S. military to reorient its focus to eliminating ISIS from Afghanistan.

Russia and Iran are both ideologically opposed to the Taliban. But they are supporting them more actively than ever, because of their skepticism about the efficacy of U.S. strategy in Afghanistan and the consequent need to develop good relations with an ascendant insurgency. They (and China) are also opposed to long-term U.S. military presence in Afghanistan, and any end state that provides for permanent U.S. military bases in the country is unlikely to attract their support.

The ground realities in Afghanistan—the strong opposition among Afghans to any regression in the political and social progress their country has achieved in the past fifteen years on the one hand, but the impossibility of defeating the Taliban militarily on the other—dictate that the stakes of these regional actors must be protected in any peace process with a real prospect for success.

Any formula for politically mainstreaming the Taliban would have to include some form of power sharing, at least as a first step to their assimilation into a competitive electoral process, to be acceptable to the insurgency. This would satisfy Pakistan’s desire to have the Taliban “in” but not “on top” in Afghanistan. Russia and Iran’s concerns about permanent U.S. military bases are already folded into the Taliban’s longstanding insistence on U.S. troop withdrawal as a precondition for peace. The good news is that the Taliban are not as rigid about this ask in private as they are in public.

During my conversations with senior Taliban representatives on the sidelines of a discreet Track 1.5 meeting in Doha last year, the Taliban were forthcoming about their flexibility on the timeline for the departure of U.S. troops. The most astute among them see international engagement in a post-war Afghanistan as necessary for the Taliban to gain recognition as a legitimate political force and to reduce Pakistan’s hold over them. They would likely be willing to allow the United States to retain a “temporary” counterterrorism presence in Afghanistan, perhaps branded solely as an anti-ISIS mission, with an eventual withdrawal predicated on the Taliban’s continuing adherence to the peace deal and stability in Afghanistan. The United States should insist on this as a condition for political recognition of the Taliban.

In return for setting up a process that accommodates the concerns of regional spoilers, the United States would demand that these countries pull back their material support to the Taliban insurgency. That means verifiable measures to curtail financing and arming of the Taliban, and for Pakistan and Iran to also limit the group’s safe havens in their countries or freedom of movement across their borders into Afghanistan. In addition, this peace process should generate genuine positive stakes for Pakistan, Russia and Iran to pressure authoritative Taliban to join talks and keep them honestly committed to the process.

U.S. military strategy would now focus more narrowly on the irreconcilable elements within the Taliban and on the small ISIS presence in the country. This concentrated mandate should be welcomed by U.S. military commanders who recognize that a modest increase in U.S. troop numbers in Afghanistan will not fundamentally change the battlefield situation against the Taliban.

The region’s transformed outlook towards Afghanistan will also provide the Afghan government an opportunity to accelerate domestic governance and development reforms currently compromised due to pervasive insecurity across the country. These remain critical for enhancing the credibility of the Afghan state in the eyes of its citizens.

U.S. policymakers must keep their eye on the ultimate objective of achieving a peaceful Afghanistan that ceases to be a direct threat to the United States. This cannot be achieved without the support of Afghanistan’s neighbors. The proposed approach offers the most realistic way to get their backing.

Moeed Yusuf is associate vice president at the U.S. Institute of Peace.