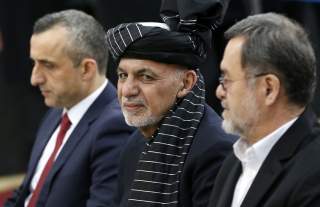 It has been an eventful month or so for the Afghanistan war. President Donald Trump indicated in mid-December that he may soon order a drawdown of U.S. forces there. Talks between the United States and the Taliban talks gained momentum only to reach an impasse in mid-January. The deadlock, it appears, has since been overcome. Around the same time the candidate filing period for Afghanistan’s presidential elections came to a close, marking the official start of the campaign season. Amid all this, the war continues unabated, with Afghan lives, sadly, being lost at or near record levels.

The July presidential elections—set to take place as the United States seeks to fast-track an exit from Afghanistan, and as the Kabul government loses territory to the Taliban—may end up being an exercise in sadomasochistic political correctness.

An Exercise in Insanity

If a negotiated settlement to the war is a priority, and the aim is to facilitate talks between the Taliban and Kabul, then a legitimate, stable Afghan government would be a prerequisite. But Afghanistan’s history to this date indicates that elections are not an effective way of producing legitimate and stable central government there. To the contrary, every election in Afghanistan has pushed the country into a major political crisis, due to large-scale rigging. As the recent parliamentary elections demonstrate, the Afghan government has neither the will nor the capacity to enact electoral reforms that would produce credible polls.

The United States and other Western powers, however, remain committed to propping up a system in Afghanistan that they can claim is ideologically and morally distinct from Taliban rule. But that system—and the idea that there is a sovereign, democratic Afghanistan—is a myth. The Afghan government controls less than half of the country’s territory. The man most Afghans likely chose as president in the last two elections—Dr. Abdullah—has been denied that office by rigging. And their president today, Ashraf Ghani, is a micromanager who rules by fiat over ever-diminishing territory. He refuses to share power and has reignited ethnic discord.

The odds are that the Afghan state machinery will attempt to rig the upcoming presidential polls to secure a second term for Ghani, triggering political upheaval as the United States seeks an exit from the country.

Other than the rigging, Afghanistan’s presidential polls, assuming they take place, will be difficult to predict—and it may be unclear (importantly, including to the Taliban) until the end of this year who will rule Afghanistan for the next five years. There are eighteen registered candidates, each with between two and four running mates. Most of these tickets are multiethnic, representing the country’s various factions and sub-factions. Last-minute changes in endorsements have added to the confusion, reflecting intense horse-trading and hedging schemes. The pool of candidates may narrow as the elections near. And the elections are likely to go to a run-off between the two largest vote-getters.

In the second round, we could see a rematch of the 2014 elections: Ghani against Abdullah. Or there may be a faceoff between two of the country’s most powerful Pashtun leaders: Ghani and his former national security advisor Hanif Atmar.

An Atmar victory may ease the ethnic tensions that have been rekindled since the end of the Karzai era. Atmar, according to his Tajik running mate, Younus Qanooni, has agreed to formally create a prime minister’s office, which would absorb some presidential powers. If true, Atmar would probably be the only Pashtun leader who presently supports the demand by non-Pashtuns for the decentralization of power. These are among the reforms Ghani agreed to in his 2014 power-sharing accord with Abdullah, but, over four years later, they have yet to even be initiated. Decentralization is largely opposed by Pashtuns and so there is risk that Atmar, if he has indeed made such a commitment, may end up not fulfilling it.

Herein lies the problem: in a time in which Afghanistan needs its elite to unite and build consensus, it is holding elections, which are divisive winner-takes-all affairs. At the moment, the Taliban refuse to negotiate with the Kabul government. And why would they? Not only is a lame duck government in power, but, by the summer, the country could be in the midst of a major political crisis. Would it make sense for the Taliban to acknowledge the legitimacy of the Kabul government now after refusing to do so for seventeen years only for that government to fall apart months later due to an election crisis? The Pakistani state faces a similar quandary as it assesses the costs and benefits of further pressing the Taliban to negotiate with Kabul.

An interim government would reduce the risk of the elections precipitating an existential crisis for the present system. According to the Afghan constitution, Ghani’s tenure ends this May. But given that the polls have been delayed to July and the process itself is bound to be stretched out, Ghani will remain in power at least into the late summer or fall. His opponents may accuse him of using the process to prolong his rule. The 2014 presidential elections, one may recall, ultimately lasted over five months. The first round was held in April and Ghani was announced as the victor in September. The tallying and verification process for the first round alone took a whole month. The second round was then held a month after that. And then there was a three-month standoff over the second-round results that only ended when then-Secretary of State John Kerry intervened and brokered a deal between Ghani and Abdullah.

Is the Trump administration willing to and capable of managing an election crisis in Afghanistan and talks with the Taliban at the same time? Or will a frustrated Trump just pull the plug on the war, concluding that it is pointless to send nineteen-year-old Americans to put their lives on the line in a country busy fighting itself?

Getting the Taliban to Talk to Kabul

A responsible U.S. exit from Afghanistan would be one that achieves a successful handoff in the negotiation process from the United States to the non-Taliban Afghan elite who partake in the present system. At best, an election process likely delays that handoff from taking place to the end of this year. In a worst-case scenario, another disputed election could make that handoff impossible as the country falls into a full-fledged political crisis.

And so two conflicting timelines must be reconciled: the six-month window Trump has apparently given Amb. Zalmay Khalilzad to secure a deal with the Taliban, and the presidential elections scheduled for July.

A sensible approach may be to stretch both timelines. One, Trump should postpone the troop drawdown and give Khalilzad more leverage and time to achieve an agreement with the Taliban that trades a phased U.S. withdrawal for tangible Taliban guarantees that reduce the risk to America from transnational jihadists. And two, the July elections should be deferred for at least a year, with an interim unity government—formed from all the major factions in the country—enacting electoral and other systemic reforms over this period and serving as a united front to negotiate with the Taliban.

Talking and fighting can take place simultaneously as insurgencies come to a negotiated close. But to hold elections on top of that is too much to ask of an incapable government in Kabul and a commander-in-chief in Washington with rapidly depleting resolve to commit to an indisputably unwinnable war.