In Afghanistan, China Is Put to the Test 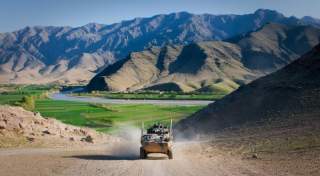 Developments in Afghanistan over the past two weeks have underscored an emerging dilemma for China’s approach to the country. In the recent past this has been defined by a focus on the protection of its own narrow self-interests, namely insulating its restive province of Xinjiang from the destabilizing influences of Afghanistan-based radical Islamism and drugs trafficking, as well as securing access to Afghanistan’s natural resources.

With the U.S. military presence now reduced to some 9,500 personnel and the government of President Ashraf Ghani facing not only the Taliban insurgency but also the potential spread of Islamic State (IS), Beijing now faces three major tests for its aloof approach.

First, the Afghan Taliban’s confirmation of the death of their reclusive leader, Mullah Muhammad Omar, and the apparent fracturing of the group under Omar’s successor, Mullah Akhtar Mansour, weakens the likelihood that Beijing’s preferred outcome—a negotiated political settlement between the Taliban and President Ghani’s government—will occur. Since the advent of the Taliban in the mid-1990s, China has been prepared to deal with the group in pursuit of its interests, a tendency highlighted by its then ambassador to Pakistan, Lu Shulin, famously meeting Mullah Omar in Kandahar in November 2000 to seek assurances that Uyghur militants from Xinjiang would be restrained.

Even after the events of 9/11 and U.S. and NATO intervention to oust the Taliban, Beijing continued to seek similar assurances from the group’s leadership council in exile in Pakistan, the Quetta Shura. Ultimately, Beijing’s pragmatism vis-à-vis the Taliban has been based on the judgement that it will remain a core political actor in the country and that its goals remain limited primarily to Afghanistan.

Recent reports of the defection of some elements of the Taliban and associated fellow travellers, such as the Islamic Movement of Uzbekistan (IMU), to IS however should give Beijing reason to reassess these judgements. The demise of Mullah Omar and the apparent fracturing of the Taliban, as Andrew Small recently noted, fundamentally undermines China’s push for a political settlement as “Beijing risks being in the position of pushing peace talks...with a wing of the Taliban, rather than with representatives who can carry the broader movement with them.”

The switch of allegiance of groups such as the IMU to IS should also be worrisome for Beijing. The IMU has in the past hosted Uyghur militants in camps along the Af-Pak frontier, a threat underlined in February this year when Afghan government security forces arrested fifteen Uyghur militants in Kunar Province along the border with Pakistan who had formerly been affiliated Pakistani Taliban.

Second, the multiple bomb attacks that have rocked Kabul on August 10 and August 12, killing fifty and injuring hundreds, has prompted Beijing to offer increased provision of equipment and support to Afghan security forces. Will this go beyond the supply of limited “non-lethal” security equipment and training (largely to Afghan police) that has characterized Beijing’s activities in this realm in the recent past?

The rising number of terrorist attacks in Xinjiang over the past year, which Chinese officials have linked to instability in Afghanistan and Pakistan and the rise of IS, combined with perceptions of its own growing interests and influence may prompt Beijing to modify this stance.

While there has been no official change announced in Beijing, it is clear that some are beginning to question the utility of current policy. Indeed, even the Global Times, the CCP’s English-language mouthpiece, published an editorial in October last year that suggested while greater involvement in Afghanistan “will bring huge risks,” Beijing has no choice but to “be there” and “bear the cost of being a major power.”

Finally, President Ghani’s charge in the wake of Monday’s bombings that Pakistan is in a state of “undeclared war with Afghanistan” due to its provision of safe havens to the Taliban promises to inject further tension into Beijing’s “all weather friendship” with Pakistan. A key element of Beijing’s strategy to encourage a political settlement in Afghanistan has been built on the belief that it can leverage its influence with Pakistan to compel the Taliban to the negotiating table. Pakistan’s continuing provision of safe haven for the Taliban and associated militants (such as Uyghurs) not belies this belief but also actively undermines China’s interest in achieving a stable Afghanistan.

With the Taliban fracturing, IS influence on the rise and the utility of its close ties to Pakistan in the Afghan context arguably declining, the question remains as to how high a cost Beijing is willing to pay to secure its interests as a “major power” in Afghanistan?

Michael Clarke is Associate Professor at the National Security College, ANU. He is the author of Xinjiang and China’s Rise in Central Asia – A History (London: Routledge 2011).

Correction: The original version of this article stated that Ashraf Ghani is the prime minister of Afghanistan. He is the president.