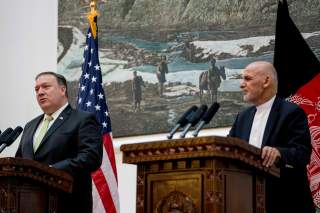 International donors will have some good news when they gather to review Afghanistan’s economic progress on November 27–28 in Geneva. While peace prospects, Taliban attacks, and Afghanistan’s unsettled politics will be on everyone’s mind, donors can applaud positive reviews of Afghan performance from the World Bank and the International Monetary Fund (IMF) as welcome steps.

Afghanistan’s partners should still make clear, however, that continued aid depends on continued reform. Donor governments should also highlight for all parties, including the Taliban, how agreeing on a viable path to peace is essential to obtaining substantially larger economic dividends in the future. Moreover, U.S. Envoy Zalmay Khalilzad just recently held a round of talks about peace with the Taliban in Qatar.

The World Bank’s “2019 Doing Business Report” gives Afghanistan the “top improver” rating for the past year. Despite significant security challenges, a severe drought, low growth, and divisive politics, Afghanistan leaped ahead sixteen places in the Bank’s ranking of 190 countries, more than any other country. The Bank report shows particularly impressive progress in the ease of starting a business, resolving insolvency and protecting minority investors, with Afghanistan jumping ahead a remarkable 163 places in the last area.

While Afghanistan still ranks only 167 of 190 countries in the overall Doing Business ranks, this should be viewed as a significant achievement under extremely challenging circumstances. As one senior international official put it, “The cup is certainly half full.”

Recent IMF reports also cite “notable progress” in fiscal management and financial sector reforms. So far, three (out of six) reviews by the IMF under its arrangement with Afghanistan have been completed on time, and there is good progress on the fourth review. The Afghan government has made considerable improvements in mobilizing domestic revenues, managing finances, shoring up the financial system after the Kabul Bank disaster, and strengthening anti-corruption regulations.

The advances give partners ample reason to be pleased about work since the October 2016 Brussels meeting, where they pledged $15 billion in assistance conditioned on the Afghan government making substantial progress on promised reforms. At the upcoming Geneva conference, donors should praise advances, while making clear that Afghanistan must deepen reforms not only in policy but in practice as well.

Simultaneously, donors will likely flag that the Afghan government with the United States and others must improve the security situation, promote peace prospects, and promote domestic political stability. They should emphasize that finding a viable path to peace is key to substantially higher economic growth. The economics, the politics, and the security situation are crucially interconnected.

Afghanistan’s gross domestic product (GDP) growth decelerated sharply following the departure of most America and North Atlantic Treaty Organization troops in 2015. Growth fell from 14.4 percent in 2012 to 1.3 percent in 2017 and is projected to be about 2.3 percent in 2018. Afghanistan has been hit hard by a severe drought in addition to heavy fighting between the Taliban and government forces. Furthermore, the economy is impacted by political uncertainty amidst 2018 parliamentary elections and preparations for the planned April 2019 presidential election.

Increasing growth sustainably and inclusively to strengthen job creation and improve livelihoods in the country is Afghanistan’s central economic challenge. Afghanistan has much potential for longer-term growth in mining, agri-business and regional connectivity via energy and rail corridors. However, Afghanistan’s “youth bulge” brings massive numbers of new entrants into the job market each year, a challenging task made much harder with the Taliban gaining control of additional territories and clashes inflicting high casualties among civilians and security forces.

A sustainable path to peace is likely the best way to alleviate the deterrent to growth imposed by the daunting security situation. The “peace dividend” from a durable agreement with insurgents could be considerable, especially with donor and private sector support.

The Afghan government initiated a peace offer in early 2018, which was followed by a first-ever three-day ceasefire in June. The Taliban rebuffed efforts for a second ceasefire, while consistently refusing to talk directly with the Afghan government. The Taliban subsequently launched a series of military attacks demonstrating its ability to inflict significant damage. Afghan security forces and their U.S. allies have yet to reverse the Taliban offensive or break the relative stalemate on the ground.

The Taliban, however, is willing to talk about peace with the United States and others (e.g., Russia). The U.S. special envoy for Afghan Reconciliation, Ambassador Zalmay Khalilzad, is spearheading American efforts. Khalizad, a respected, experienced diplomat of Afghan origin, is exploring whether America and its partners can bring the Afghan players to the table around a constructive peace agenda. Hard work is underway thinking through what a path to reconciliation might look like. Khalizad met again recently with the Taliban in Qatar and afterward said he is “cautiously optimistic.” He is reportedly hoping for an agreement before Afghanistan’s presidential elections in April 2019. Meanwhile, there are reports that some are mulling postponing Afghanistan’s presidential elections to focus on a peace process.

When donors gather in Geneva on November 27–28, they will have the opportunity to support a peace process by discussing the benefits of peace for the Afghan people. They must also consider the role that the international community, including overseas Afghans, can play in making sure that a peace dividend is well resourced to help rebuild the country. Donor governments must also renew their commitment pressing ahead with economic and governance reform including fighting corruption.

The key message, however, might well be how Afghanistan’s international partners can support a negotiated peace. A peace agreement with well-funded donor support and private-sector investment will be much more beneficial to the Afghan people than one in which Afghanistan is left on its own to recover. Making this clear in Geneva can provide a boost for those working to make peace a viable option.

Earl Anthony Wayne is a Public Policy Fellow at the Wilson Center’s Mexico Institute. He is a former U.S. Ambassador to Mexico and Assistant Secretary of State for Economic and Business Affairs.