Afghanistan Is Not Out of the Woods Just Yet 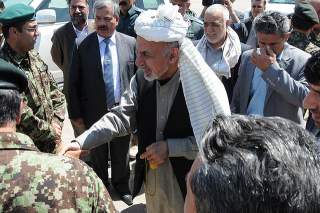 On Monday, Afghanistan experienced its first peaceful, democratic transition of power when Ashraf Ghani was sworn in as its new president. The landmark achievement was made possible in part by heavy U.S. diplomatic intervention in the months-long election dispute between Ghani and his second round rival, Abdullah Abdullah. More good news came on Tuesday when President Ghani and U.S. Ambassador James Cunningham signed a bilateral security agreement that allows for nearly 10,000 U.S. troops to remain in the country after 2014, albeit primarily for training purposes.

Settling these two issues helps support a U.S. strategy to ensure a modicum of stability in Afghanistan after U.S. combat operations end there this December. The emphasis in Washington, particularly in conservative circles, is on troop numbers. But to prevent a downward slide in Afghanistan from becoming steeper, Washington must remain diplomatically engaged with Kabul, including at the presidential level, where contacts have been minimal since President Barack Obama came into office. America midwifed the election deal. And it must help it endure through its infancy. There are a number of reasons why the deal’s survival will remain questionable for the coming months and years.

One, neither Ghani, nor Abdullah have dispositions conducive toward making a power-sharing arrangement successful. Ghani has been described by former colleagues and others as temperamental and intolerant of alternative opinions. Abdullah, for his part, has demonstrated a willingness to push Afghanistan to the brink to get what he wants. He backed out of the election negotiations on a number of occasions. Even after the deal had been finalized, Abdullah withdrew from the inauguration ceremony, only to participate when he was allowed to address the gathering.

Two, despite a power-sharing agreement, many of the rules of the game have yet to be determined. On paper, the national unity government pact devolves some of Ghani’s powers to Abdullah, who serves as the “chief executive officer” (CEO) and is “answerable to the president.” Ghani leads the cabinet meetings, while Abdullah heads the newly created council of ministers. Given their obstinate behavior, there is danger that if the two men are not on the same page, these bodies will contribute to dysfunction or even serve as two parallel governments. Abdullah will be persistent in his push to be treated as a co-equal, not a deputy. And he has demonstrated that he’s willing to play a high-stakes game to have things his way.

Three, the Abdullah-Ghani election dispute opened wounds of the past, highlighting ethnic and partisan divisions not just in the overall society, but also within the state machinery itself. During the election crisis, some members of the army, whose officer corps remains overwhelmingly Tajik in ethnicity, had suggested they would attempt a coup to impose stability. These divisions, which persisted in a more latent form during the Karzai era, will be aggravated if and when tensions between Abdullah and Ghani renew. If the two men can’t get along, they will be unable to help the country heal from an extremely divisive summer.

Four, talks with the Taliban will likely serve as a source of tension between the Abdullah and Ghani camps. Ghani is more inclined to negotiate with the Taliban. Both Ghani and the insurgents are Pashtun. Abdullah, who is identified as a Tajik despite being half-Pashtun, is far more averse to the idea. There were rumors during the election crisis that if a civil war broke out, Ghani and former president Hamid Karzai would side with the Taliban against Abdullah. Now, if relations between Afghanistan’s top two leaders break down or Ghani goes too far in reaching out to the Taliban, will Tajik members of the army and intelligence service side with Abdullah against the president?

Five, in addition to having to manage relations with one another, and address both a persistent insurgency and deteriorating economy, both Ghani and Abdullah will have to deal with an increasingly assertive parliament, which has, for example, impeached ministers in Karzai’s second term. Many believe that the presidency is too powerful in Afghanistan. And there are growing calls for a transition toward a parliamentary system and devolution of power to the provinces. But those moves are likely to also complicate the flow of government. A parliamentary system would, at least temporarily, increase the power of small factions, heightening the ethnic divide. And a crude devolution of power, without any recognition for capacity at the local level, would reinforce the power of warlords.

Ghani faces an uphill battle as he works to stabilize what is effectively a recessionary economy, keep his arranged-marriage partner Abdullah happy, and deal with obstructionist forces in parliament, the security services and among the warlords. It took Hamid Karzai many years to develop the cunningness necessary to rule Afghanistan. Ghani, an anthropologist and former World Bank official, may have to develop that requisite guile in the coming months. To prevent Afghanistan’s political system from unraveling, Ghani will need the moral support of not just the U.S. ambassador and secretary of state, but also the president of the United States. President George W. Bush regularly video-conferenced with Karzai. Obama ought to consider holding periodic video chats with Abdullah and Ghani. As the president who escalated America’s war in Afghanistan, this is the least Obama could do to fulfill his moral responsibility to help bring peace to the war-ravaged country.

Arif Rafiq is president of Vizier Consulting, LLC, which provides strategic guidance on Middle East and South Asian political and security issues. He is editor and publisher of the Pakistan Risk newsletter. You can find him on Twitter: @ArifCRafiq.