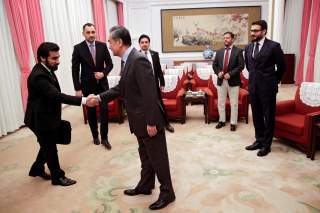 During a visit last month to Washington, the Afghan government’s national security advisor, and former ambassador to the United States, threw a fit. During an official appearance at the U.S. Institute of Peace, and in private conversations during the same week, the thirty-six-year-old Hamdullah Mohib repeatedly excoriated the United States—and in particular, its special envoy for Afghanistan peace talks, Ambassador Zalmay Khalilzad. His core charge was that Washington was going over the head of the Afghan government, led by President Ashraf Ghani, to negotiate a peace deal directly with the Taliban. As Mohib said about Khalilzad, “he is ostracizing and alienating a very trusted ally and partner.” Worse, Mohib accused Khalilzad, himself Afghan-born, of wanting to become viceroy of the country in a way that would shunt aside Ghani’s constitutionally-elected government.

Few people doubt that Mohib was acting on Ghani’s orders in making these assertions. The mild and erudite Mohib—born in Afghanistan, educated in London, married to an American, successful in his tenure as ambassador in Washington—is no unreconstructed Afghan warlord. I have known him for years and never so much as heard him raise his voice.

But for his sins, Mohib is now persona non grata with the Trump administration. He was asked to leave the country promptly after his March outbursts. Under orders from Secretary of State Mike Pompeo, American officials are now instructed not to deal with him directly—or even to attend meetings at which he might be physically present. Pompeo probably understands very well that Mohib was speaking not for himself but for Ghani. However, in Pompeo’s eyes that may be all the more reason to punish him. Doing so sends a message to Ghani about not crossing the Trump administration, especially in public.

At one level, Pompeo’s decision is understandable. Yes, Ghani is under siege, physically and politically, from all directions, and can be forgiven for some anxiety. But public outbursts by a top official in the Afghan government against the country’s indispensable ally cannot be smart. The Taliban claims that Ghani, like former President Hamid Karzai before him, lead stooge governments that are simple puppets of the United States. Polls in Afghanistan consistently repudiate this ridiculous Taliban argument—and the Taliban itself remains widely disliked, with favorability ratings typically in the 10 to 20 percent range. But Khalilzad, Pompeo and Trump seem, in Ghani’s eyes, to reinforce the narrative by repeatedly negotiating only with the extremist movement, leaving Kabul high and dry.

President Ghani needs to relax a bit. While his stress level is understandable, it is counterproductive. First, Khalilzad and other Trump administration officials have repeatedly said that until there is a complete deal with the Taliban that includes a ceasefire and a dialogue involving the Afghan government, there is no deal on anything. Preliminary progress to date on two other matters—the Taliban promising not to host Al Qaeda and other extremist movements on Afghan soil again, Washington promising to reduce NATO troops over time—cannot translate into a deal absent major headway on these other matters. And all things considered, Trump’s strong commitment to defeat ISIS and Al Qaeda around the world augurs well for at least some U.S. residual presence in Afghanistan for a long time to come.

That said, Washington now needs to forgive Mohib and rehabilitate his standing in Afghan dealings with the United States. It is not about Pompeo and Trump proving they can be nice guys or genteel diplomats. The reasons are much blunter and simpler.

First, it is a general corollary of diplomacy that, in dealings with an enemy, allies cannot be divided—or even give the impression of being divided, lest the enemy sense an opportunity to divide and conquer. That is why, for example, President Moon Jae-in of South Korea wisely works so hard to stay close to Trump in U.S.-South Korea dealings with North Korea. It is why the Trump administration is rightly working with other Latin American states to pressure the Maduro government in Venezuela, rather than to go it alone, and why U.S. presidents dating back decades have worked closely with allies and Congress to pressure Iran with sanctions with a united front.

Second, in regard to Afghanistan in particular, we need to avoid giving the Taliban the wrong idea. The movement’s leadership probably thinks that it is winning. As the old adage goes, while Americans have the watches, the Taliban has the time. That may be an incorrect assessment, as noted above, but there are enough battlefield trends and enough Trump administration inconsistencies to lend credence to a Taliban narrative that Trump really wants to pull out of Afghanistan, with or without a deal. If Taliban leaders feel that a cold war is emerging between Ghani’s government and Trump’s, then their smart play is to let it fester and to wait. We should not given sustenance to such a calculation.

Mohib was wrong and it was necessary for the Trump administration to say so. The point has been made. Now let’s rehabilitate him and move on.

Michael O'Hanlon is a senior fellow at Brookings and author of the new book, The Senkaku Paradox: Risking Great Power War over Small Stakes.