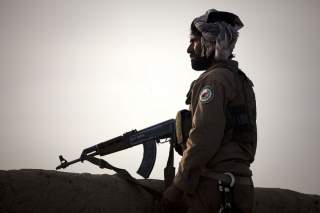 In mid-July, chairman of the Joint Chiefs of Staff Gen. Joe Dunford relayed to the media cautious optimism regarding the war effort in Afghanistan. Afghan security forces—reeling from a bloody 2015 fighting season, which witnessed the first collapse of a major population center since the overthrow of the Taliban in 2001—appear to be making slow and steady progress on the battlefield, a rare piece of positive news emanating from the war-torn region.

A multitude of factors are showing encouraging signs for the fledgling Afghan military. Afghan security forces are applying lessons learned to last year’s harrowing fighting season by reducing static checkpoints and pushing for more offensive operations. Prioritizing strategic terrain and pulling back forces from less populated regions, such as the withdrawal from Nowzad, has ushered in new offensive capabilities and strengths for Afghan security forces.

New technologies, to include a fixed-wing close air support platform—the A-29 Super Tucano—and the employment of surveillance drones, has bolstered the capabilities of Afghan forces and improved morale of fighting forces on the ground. President Obama approved new rules of engagement for U.S. forces operating in Afghanistan under the train, advise and assist Resolute Support mission, to assist their fellow host-nation forces in targeting the Taliban.

All of these steady improvements appear to be showing signs of relative success, as the number of attacks in the country has decreased and Afghan forces continue to conduct offensive combat operations to root out the Taliban.

Though the tactical improvements on the ground should be praised, they underscore a major issue regarding coverage of the conflict in Afghanistan: our nearsighted focus on military operations, and not on the political developments that are necessary for lasting peace and stability in the region. After fifteen years of war, the major social, economic and political dynamics that exacerbate tensions in the mountainous country are still very much prevalent in the country, and risk a relapse into the chaotic period that preceded the Soviet withdrawal in 1989.

Despite rhetoric emanating from the twenty-four-hour media cycle, the basic fundamentals of Afghanistan’s conflict have changed little since the rise of the Taliban in 1994. After the Soviet Union’s withdrawal in 1989 and the ending of financial assistance in 1992, Afghanistan descended into financial oblivion. The very foundation of Afghanistan’s economic system and livelihood prior to the Soviet Union’s intervention was primarily dependent on muscle labor and rural subsistence farming. The subsequent invasion wrecked a system of living that had endured for centuries, and was replaced with a war economy dependent on foreign aid, monetization and the displacement of rural societies into urban environments—groups that would eventually become dependent on state assistance and welfare.

The destruction of Afghanistan’s social fabric during the Soviet occupation, and the displacement of rural societies, would eventually breed resentment and fundamentalist groups throughout the country. The 1992 ending of financial aid was the culminating spark that would light the fire that gave rise to the Taliban. As financial aid ended, and the Najibullah government no longer became the flag bearer of welfare disbursement, Afghanistan descended into a period of warlordism, with an economy centered on the black-market smuggling of precious gems, minerals and drugs.

Enter the modern era, under the Ghani administration: one can see the parallels between the ending of the Soviet era in Afghanistan and today’s steady withdrawal of NATO. Despite battlefield successes, and a sizeable and capable Afghan Army, the basic issues that brought rise to the warlord period in Afghanistan are still alive and visible today.

Afghanistan is still highly dependent on financial aid that is steadily decreasing. Coupled with increased security issues and a resurgent Taliban, Afghanistan is seeing a massive flight of capital and dwindling in investments in the country.

Afghanistan’s endemic corruption issues are also a major issue of contention within Afghan society and the central government. To continue to receive international financial assistance from the international government, Afghanistan is required to meet various standards as set forth in the 2012 Tokyo Conference. The Ashraf Ghani administration has made corruption a central tenet, but despite pledges by the National Unity Government (NUG) under Ghani and his Chief Executive Officer Abdullah Abdullah, Afghanistan was downgraded in 2015 by Transparency International’s corruption index.

Currently, the NUG is still the standard-bearer of welfare to Afghans—its main legitimizing element. If corruption continues to eat at donor and international aid, ordinary Afghans will look elsewhere for self-preservation and economic assistance.

Evidence of a return to warlordism in Afghanistan is already prevalent, especially in northern provinces such as Balkh and Kunduz, previously government strongholds, which have come under increasing pressure by the Taliban.

With worn-down and stretched-out security forces attempting to hold back the onslaught of a rising Taliban insurgency, the central government in Kabul has increasingly been pressured to support and utilize old warlord patronage networks dating back to the Soviet occupation.

The existence of these militias undermines the legitimacy of the NUG, and underscores the vital weaknesses of a central government that is not entirely capable of providing security and stability. Furthermore, it has sparked fears among Afghans who see increasing signs of a return to the chaotic period of the 1990s that pitted various warlord fiefdoms in violent battles for control of various trade and smuggling routes.

Atta Mohammad Noor has taken advantage of the security situation to strengthen his own hand and detach himself from control by Kabul. A staunch critic of the NUG, the powerful governor’s forces has been accused of thievery, land grabbing, abuse and collection of illegal taxes.

Noor has been accused by the Afghan government of illegally incorporating his militias into the Afghan Local Police (ALP), a community-based policing mechanism that is controlled and paid by Kabul. In effect, that has transformed the ALP in Balkh into a private army under Noor’s control, which Human Rights Watch has accused of carrying out abuses, and controlling smuggling and drug routes in the region.

Noor, like many strongmen in Afghanistan, is merely hedging his bets against a possible collapse of the Kabul government—a stark reflection of the Najibullah era in the 1990s.

The Ghani administration has little it can do, besides continuing to reach out to international donors to maintain the loyalty of rising strongmen in the region. As long as Kabul is still viewed as the distributor of foreign aid, it will retain the loyalty of the mini-fiefdoms cropping up across the countryside.

The fracturing and decentralization of the Taliban is also a reflection of the current state in which Afghanistan finds itself. Taliban commanders, emboldened by a sense of disillusionment after the revelation of the death of their reclusive leader Muhammad Omar, and by financial gain, have broken away into various splinter groups. Some of these groups have been able to maintain a level of self-funding by controlling opium-rich smuggling routes or illegal mining, while others have bandwagoned with the government for financial assistance.

Afghanistan’s current situation is haunted by the ghosts of the Soviet invasion, which disrupted the country’s rural subsistence economy. The dissolution of Afghanistan’s social fabric and rapid urbanization from rural communities created a spiral into warlordism and the constant cycle of competition between warlords and strongmen. The central government should heed the current warning signs that Afghanistan’s many actors are resorting to the chaos of the 1990s.

Shawn Snow is a veteran of the U.S. Marine Corps and graduate of the Fletcher School of Law and Diplomacy specializing in Central and Southwest Asia. He served ten years as a Signals Intelligence Analyst and completed multiple tours of duty to Iraq and Afghanistan. He has been published in Foreign Policy, the Washington Post, and Military Times.