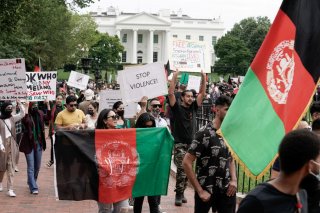 The government of Afghanistan’s rapid collapse in the face of the Taliban’s advances has been stunning.  But contrary to what critics of the American withdrawal from Afghanistan are saying, it is only the speed of the government’s end that is surprising.

The writing on the wall has been there for some time: this Afghan government was not going to last in its current form. Twenty years of American blood and treasure had merely created a hollow dependent that had little legitimacy and few willing to fight for it in the long run.

Fortunately, our national interests and safety don’t require a permanent troop presence in Afghanistan or even a (seemingly) friendly host nation government. Indeed, both the Donald Trump and Joe Biden administrations had internalized the likelihood of a Taliban return to power and found it an acceptable option among the range of even worse ones. Certainly, there was a hope that a local balance of power on the battlefield would develop between the Taliban and anti-Taliban forces that would lead to a post-war arrangement different from what has transpired.  But over the past couple of weeks, the question became only how fast and how completely the Afghan government would fail as the Americans completed their military withdrawal.  The answer was with a speed that surprised even the Taliban.

Nothing about this turn of events is an indictment of the basic decision made by President Joe Biden to withdraw U.S. troops.  The alternatives available to us were worse for the United States, and the White House did the right thing by pulling the plug on America’s longest war.

Of course, one could have hoped for a less messy evacuation of Americans and our Afghan allies from Kabul. This may have transpired if we would have stuck to the original timeline in the Doha agreement or hadn’t relied on more optimistic estimates about the staying power of the Afghan government. On the other hand, it is easy to Monday morning quarterback the planning for exigencies like what are seeing in Afghanistan, and a smoother operation under different circumstances was by no means guaranteed.

Regardless, the president is displaying real courage by sticking with a decision that remains prudential given the realities about Afghanistan and the United States.  Biden is showing the requisite realist spine that America needs at this moment.  And for that he should be praised, not damned.

The critics of withdrawal have naturally focused their ire on Biden. They argue that the U.S. could have stayed longer at a low cost, all the while preserving an Afghan government that was already teetering when even more American boots were on the ground. They also place the blame for the collapse we are seeing on withdrawal rather than on the failed two decade-long Afghan nation-building project and its architects.

This isn’t surprising since many of these critics were those same architects, along with their advisors and supporters outside government.  Indeed, these were often the very people who the Washington Post’s Craig Whitlock outed in his Afghanistan Papers series as having had little clue how to find success in Afghanistan and who consistently misled the American people about the state of the war.  Moreover, these critics are committed to propping up another, much grander failed project—the primacist approach to the Greater Middle East and the world more generally.

One example of this is the argument that all the United States had to do was simply continue the status quo in Afghanistan. Namely, we could have avoided the outcome we are seeing if the president had simply kept a small U.S. military force in the country.

Neoconservative John Podhoretz made this exact argument Sunday, claiming that had “Joe Biden done nothing, Afghanistan would not have fallen to the Taliban today. Had he just let the status quo continue, the status quo would have continued.  Afghanistan would have plodded along and we would have kept the Taliban from power with a small force of American military personnel among whose ranks there had not be a single fatality since March 2020.”

This is a prime example of the sophisms masquerading as serious argument in the current debate. The reality is that the Taliban was making progress on the battlefield and slowly gaining valuable territory—even during a period of a record number of air strikes and a “mini-surge” of U.S. forces from 2017 to 2019.  There was no stalemate that could have been maintained ad infinitum with a small force and air power.

This argument also fails because of the nature of the Afghan government and its fatal flaws. Corruption, enabled by billions of dollars from well-intentioned international donors, remained all encompassing. Afghan elections were wracked by systemic fraud, undermining the legitimacy of elected leaders. The president of Afghanistan did not wield much power outside the capital, essentially reducing the role to the mayor of Kabul. In the end, for many Afghans, the mayor of Kabul wore no clothes and failed to present a viable alternative to the Taliban.

Finally, Podhoretz’s argument assumes that a small U.S. force could have propped up the Afghan government indefinitely, while American casualties could remain at or near zero. Podhoretz fails to mention that the primary reason we have had zero Americans killed in action since March 2020 was because of the Doha agreement with the Taliban that stipulated a full American withdrawal. They had a strong incentive not to attack Americans forces, an incentive that would have been removed had we broken the Doha agreement.  Under Podhoretz’s and others’ proposed strategy for Afghanistan, we would have simply kept sending our sons and daughters to die in support of a strategy that was essentially “lose slowly.”

This mess in Afghanistan is on the shoulders of those who kept us in this war for so long and who turned a blind eye to the problems inherent in our Afghan project. The way the conflict ultimately played out—especially the surrender of many Afghan cities without a shot being fired—is a testament to the failure of the U.S. and our partners in Afghanistan to build a state with enough legitimacy and capacity to effectively hold the line against the Taliban insurgency. In the face of these unpleasant realities, the arguments for staying should ring more hollow following the Afghan government’s collapse, not less.

Thankfully, Biden—and President Donald Trump before him—recognized these realities and had the fortitude to withdraw our troops from a conflict that was no longer required for our safety. There will be more hot air than usual emanating this summer from the nation’s capital as the foreign policy elites who have been so wrong about everything over the last twenty years wail over the supposed loss of American credibility following our withdrawal from Afghanistan. But just as with Vietnam, the close of this chapter in our history will be viewed decades hence as something that will not be detrimental to America in the long run. Indeed, many will puzzle—as we do about Vietnam—why it took so long for us to realize that.

Dr. William Ruger is the Vice President of Policy and Research at the Charles Koch Institute. He is a veteran of the war in Afghanistan and was President Trump’s nominee to be ambassador to Afghanistan.