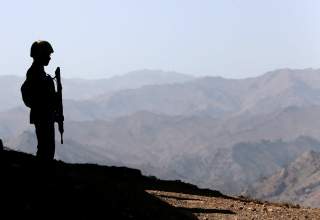 I recently participated in an international maritime conference—SAGAR Discourse dialogue organized by the Forum for Integrated National Security—that discussed “security and growth for all” in the Indian Ocean region. The conference took place in India’s coastal city of Goa, which has a long history of maritime trade and commercial exchange among different civilizations of the South, East and West. Coming from a landlocked country, Afghanistan, it was a unique learning experience for the author, as he listened to speaker after speaker on the challenges and opportunities that involve blue oceans.

Because many of the difficulties facing maritime security are land-based, an inclusive approach—which promotes cooperation and partnership between littoral and landlocked countries to resolve their shared problems—should be utilized. It goes without saying that maritime security, on which much else depends, is interconnected with events in landlocked countries. Afghanistan is a prime example: over the past forty years, geopolitical tensions have imposed destructive conflicts on what is one of the most naturally endowed countries at the heart of rising Asia.

In absence of peace in Afghanistan to enable sustainable development that secures the future of its youthful population, poverty permeates the Afghan society. And this provides an enabling environment for such maritime security challenges as terrorism, drug trafficking, arms smuggling and human trafficking—among others.

Over the past sixteen years, Afghanistan has been a victim of state-sponsorship of terrorism. As a proxy of a coastal state, the Taliban have daily killed and maimed innocent Afghans, while destroying the infrastructure that should help connect and integrate Afghanistan with its surrounding resourceful regions in the North and South for increased trade, business and investment.

State-sponsored terrorism has allowed some twenty other terrorist networks with global and regional reach to operate out of Afghanistan. At the same time, this imposed insecurity has enabled a permissive environment for mass drug cultivation and production in Afghanistan, which now provides more than 90 percent of regional and global demand for drugs. In turn, revenues from the drug trade finance terrorism and fuel dysfunctional corruption that undermines governance and rule of law, which together destabilize drug producing and transit countries alike.

Because of the interconnectedness of these imposed security challenges, Afghanistan is facing a complex humanitarian crisis with diminishing human security. Hence, this makes the country a major source of refugees and asylum seekers, who are often ferried by human smugglers to Europe, Australia and elsewhere. As we see, what is imposed on and happens in countries like Afghanistan directly affect maritime security.

This dangerous situation necessitates that littoral and landlocked states no longer pause but join hands, pool their resources, and share intelligence to pursue and implement a common counterterrorism strategy—one that doesn’t make any distinction between terrorist networks. Alongside this effort, they must work together to free their nations off abject poverty, knowing that a lack of human security allows terrorists, extremists, and state-sponsors of terrorism to recruit among the jobless, destitute youth to radicalize, brainwash and exploit them in conflicts of their choice.

Indeed, the best way to fight poverty that feeds terrorism is to foster political and security confidence-building through regional economic cooperation. The latter can serve as an important enabler in deepening connectivity, enhancing competitiveness and productivity, lowering transaction costs, and expanding markets in any region. How can this be done? In fact, Afghanistan has already put forth a strategic solution for adoption and implementation by its coastal and landlocked neighbors: The Heart of Asia–Istanbul Process (HOA-IP) and The Regional Economic Cooperation Conference on Afghanistan.

These Afghanistan-led processes were established to help secure regional cooperation for the country’s stabilization and sustainable development, thereby ensuring stability and prosperity throughout its surrounding regions. Even though they remain underutilized so far, it is in the best short- and long-term interests of coastal and non-coastal countries that participate in the two processes to double and triple their efforts to achieve the shared goals of the two platforms. Of course, every tangible step these countries take toward using these processes will help minimize their (and other countries’) vulnerability to terrorism and its state sponsors. That is why time is of the essence and they must reaffirm their often-pledged commitments to the implementation of the projects and programs, proposed under the two processes.

This month, the 7th Regional Economic Cooperation Conference on Afghanistan will take place in Ashgabat, Turkmenistan. The conference will focus on “Deepening Connectivity and Expanding Trade through Investment Infrastructure and Improving Synergy.” This will be a timely opportunity for Afghanistan’s littoral and landlocked neighbors to take stock of the progress made since the sixth conference meeting in Kabul. The meeting will have many side events that will allow the country-participants to discuss the challenges and bottlenecks. Also, they can easily discuss financing and investment needs with respect to the priority projects in the key areas of energy, transport networks, trade and transit facilitation, communications, and business-to-business and labor support.

Moreover, in early December, the 7th Ministerial Conference of HOA-IP, with its political, security, and economic confidence-building measures implementation mechanism, will take place in Baku, Azerbaijan. Afghanistan aims at deepening synergies and complementarities among the interconnected projects of the Regional Economic Cooperation Conference on Afghanistan and HOA-IP, maximizing their impact on sustainable development not only in Afghanistan but also throughout its surrounding regions. This should encourage the country-participants to assess their shared security and development needs and to bolster their engagement with Afghanistan accordingly, in order to initiate the implementation of the proposed projects with win-win benefits.

Considering these major opportunities for regional security and development cooperation, Afghanistan welcomes the new South Asia strategy of the United States, which will help it address the challenges of state-sponsored terrorism. This entails the complete closure of all safe sanctuaries in Pakistan, which is where the Taliban get indoctrinated, trained and equipped. They are then sent to Afghanistan and other Indian Ocean areas so that they can destabilize and terrorize the region. The Afghan government strongly believes that the full execution of this new U.S. strategy, in partnership with coastal and littoral states that share Afghanistan’s security and development interests, will not only help stabilize the country but also ensure security as a precondition for sustainable development across its surrounding regions.

M. Ashraf Haidari is the director-general of policy and strategy of the Ministry of Foreign Affairs of Afghanistan. He formerly served as the country’s deputy chief of mission to India. Prior to that, he was Afghanistan’s deputy assistant national security advisor, as well as Afghan Chargé d’Affaires to the United States. He tweets @MAshrafHaidari.

Image: A soldier stands guard along the border fence outside the Kitton outpost on the border with Afghanistan in North Waziristan, Pakistan October 18, 2017. REUTERS/Caren Firouz​