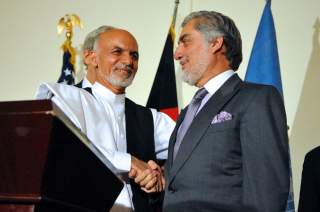 When the Office of the Director of National Intelligence published the Worldwide Threat Assessment of the U.S. Intelligence Community earlier this year, Afghanistan earned this assessment: “Political cohesion will remain a challenge for Kabul as the National Unity Government will confront larger and more divisive issues later in 2016, including the implementation of election reforms, long-delayed parliamentary elections, and a potential change by a Loya Jirga that might fundamentally alter Afghanistan’s constitutional order.”

At the time, the leaders of the National Unity Government and their senior officials disagreed with the prognosis of impending divisiveness. In contrast, they emphasized the likely challenges they would face as centering around threats from the Taliban, Al Qaeda and ISIS. The void of regional cooperation, particularly Pakistan’s inaction, brings the Taliban leaders to the negotiating table and denying them sanctuary in Pakistan.

Yet the rising tension between Ashraf Ghani and Abdullah Abdullah that was recently rendered embarrassingly public suggests that Afghanistan is indeed confronting a looming crisis of division. The frustrations of Ashraf Ghani and Abdullah Abdullah became public after Abdullah went on criticizing Ashraf Ghani in a press conference for not meeting him in the past three months, and calling the president unfit for the job. In response, to Abdullah’s criticism Ashraf Ghani’s office issued a statement called Abdullah’s comments irresponsible and not in line with the standard and spirit of governance.

The political crisis between the leaders of the National Unity Government comes at a time when Taliban are gaining momentum in strategic parts of Afghanistan. The Afghan National Defense and Security Forces are losing a key battleground. They are in full retreat from key strategic areas such as southern Helmand province. The presence of the Taliban around Lashkar Gah, in some places as close as only four or five kilometers from the provincial capital, suggest they intend to encircle the city similar to the siege of Kunduz last September, using the adjacent districts as a launching pad.

These moves show plainly the Taliban’s ambition to capture an important provincial capital. If the Taliban managed to capture Lashgar Gah, it would have incalculable political and security consequences for the Government in Kabul, and to the allied efforts of the international community, in particular the United States. Similarly, key districts in Kunduz, Baghlan and Takhar provinces fell into the hands of the Taliban.

Since the beginning of the year, the Afghan National Army has faced a dramatic casualty rate in the battlefield. Army recruitment has reached its lowest point to date and desertion has risen to an all time highest. These events are ultimately attributed to the weak leadership and lack of political will of the National Unity Government to implement desperately needed reforms.

There are also indications of growing ethnic polarization in the northern provinces of Afghanistan as a sizeable number of the former warlords are scheming ways to remobilize and re-arm their followers against the Taliban if the political and security situation deteriorates further. If such trends manifest, Afghanistan will face a heightened political and military fragmentation as the means of violence is decentralized in the hands of competitive rearmament by different groups, with their diverse agendas.

Another serious political threat facing the National Unity Government is former Afghan president Hamid Karzai, who has been engaged in ceaseless politicking with influential figures and groups from around the country. It is speculated that the hive of intrigues buzzing behind the walls of Karzai’s fortress next door to the presidential palace are aimed at manipulating a take over of an expected upcoming Loya Jirga (“grand council”) mandated to decide upon changing the Constitution, one of the provisions of the formation of the Unity Government. If Karzai has control, whether direct or indirect, over the outcome of the Loya Jirga, he could contrive to dissolve the NUG and establish a provisional government, headed by himself. This has served as an excuse for the NUG leaders to delay the Loya Jirga. Yet, these very delays are emboldening Karzai and leading to further deterioration of political legitimacy ultimately more harmful than Karzai’s meddling.

If any or all of these processes are allowed to continue unhindered—a re-armament by warlord militias, a territory grab by the Taliban, or further delay of the promises of electoral and constitutional reform of the Unity Government—it would drastically intensify the conflict, militarize the society even further and sabotage the precarious progress in strengthening the rule of law. There will be a deepening of the crisis of political legitimacy. Under these fragile circumstances, Afghanistan cannot afford any of those outcomes.

Afghanistan has long been a playground for shortsighted leaders who sold the future of the Afghan people in exchange for expediency, for their own gratification or glory, for power, or simply, for money. Ashraf Ghani and Abdullah Abdullah must break this pattern, by putting aside their differences, pettiness and egos. Instead, they must face up to the security crisis encircling the country, and the cracks in the ship that have started to leak as a result of inattention to the promises made at the outset of their discordant ascent to the palace. Now is the time to lay the foundation anew. It is time to deliver Afghans a reformed political structure, elections and security. It is time to actually become a unity government.

Ali Mohammad Ali is an independent researcher and analyst based in Washington D.C. Ali has served as Senior Advisor to the National Security Council of Afghanistan on issues of counterterrorism and intelligence.