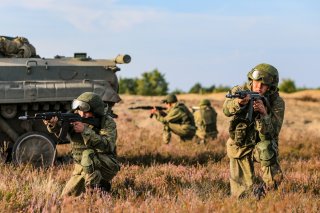 President Joe Biden’s Tuesday speech was supposed to restore confidence amongst allies who have witnessed America’s rapid retreat from the global stage. Biden spoke of a new “relentless diplomacy,” arguing that the United States—now “free” from Afghanistan—can finally prioritize the existential global threats of climate change, Covid-19, and terrorism. As if it was so easy.

But it is actions, not words, that carry weight in foreign affairs. A dedicated U.S. policy to rebuild its credibility and counterterrorism deterrence is needed. For those strategic goals, the United States needs to boost cooperation with our long-time partners in Central Asia to engender faith among friends and caution among adversaries.

However, after criticizing the previous U.S. administration for shirking its global responsibilities, Biden illogically justified the debacle of the U.S. withdrawal from Afghanistan and empowerment of the Taliban. In an August address, he stated that “our true strategic competitors—China and Russia—would love nothing more than the United States to continue to funnel billions of dollars in resources and attention into stabilizing Afghanistan indefinitely.” Nothing could be further from the truth, as Russia and China believe that by engaging Afghanistan in a bid to dominate Eurasia, they are better positioned to oppose U.S. primacy in global affairs, including Europe.

The European Union and the United States alike are seeking to mitigate this by setting the stage for the revival of the nineteenth-century “Great Game” between the British and Russian empires over Afghanistan. The competition over Central Asia’s geoeconomic and geostrategic potential is just beginning.

Countries do not have friends, only interests, Lord Palmerston observed. Historically, China and Russia opposed the Taliban. Today their strategy is to engage the Taliban to develop economic corridors in Afghanistan such as the China-Pakistan Economic Corridor (CPEC) as part of Beijing’s Belt and Road Initiative (BRI), which are aimed at denying Western states access to Central and South Asia’s coveted transportation routes and markets. To this end, Beijing has offered the Taliban investments in energy and infrastructure projects, who in turn have never attacked Chinese infrastructure projects.

Yet, having retreated from Afghanistan, the United States and Europe will aim to blunt the influence of China and Russia in Central Asia by seeking local regional allies, such as Kazakhstan and recently Uzbekistan, to project power across the region and keep the Taliban in check.

Kazakhstan—home to Central Asia’s largest territory, military, and economy, accounts for about 75 percent of all FDI inflows into Central Asia. In 2020, Kazakhstan’s total foreign direct investment stood at $161 billion, with $30 billion coming from the United States. This has been made possible by Kazakhstan’s shift to a post-industrial economy that is based on renewable energy, high value-added agriculture, and services. Its new, Western-trained managerial class is developing a sophisticated financial sector.

To this end, in August 2021, a consultative meeting of the heads of Central Asian states agreed that Kazakhstan’s Astana International Financial Center, launched by then-President Nursultan Nazabayev in 2015, would serve to deepen Central Asia’s economic cooperation and attract foreign investors. As a result, Kazakhstan will serve as a fulcrum for cooperation in regional security, economics, and trade. This is in line with Nazarbayev's proposition to create the Central Asian Union, akin to the Association of Southeast Asian Nations (ASEAN), in the early 2000s that was revisited in 2019, to boost the region’s role as a geostrategic and economic leader.

Similarly, in 1992, Nazarbayev proposed at the UN General Assembly the Conference on Interaction & Confidence Building Measures in Asia (CICA) to act as a collective security organization for Asia at large, including not only Pakistan and India but also harboring both Iran and Israel under its roof. It launched in 1999.

Kazakhstan’s “multi-vector” foreign policy since the early 1990s was geared to balance strategic and economic ties with China, the United States, Russia, and the EU and is currently dampening great power competition.

Maintaining a balance from Russia and China enables Kazakhstan to present itself as the logical entry point for foreign investors to the BRI and the Moscow-based Eurasian Economic Union (EAEU) with its 180 million consumers that also includes Armenia, Belarus, Kazakhstan, and Kyrgyzstan. Kazakhstan stands to receive up to $5 billion in transit fees each year.

Russia closely guards its security interests in Central Asia, maintaining military bases in Kazakhstan, Kyrgyzstan, and Tajikistan, while China seeks to use Afghanistan as its gateway to trade with the Middle East, Central Asia, and Europe. China has also sought to advance a “Pax Sinica” across the Eurasian landmass via its BRI, having referred to Kazakhstan as the “buckle” in the BRI’s “belt.” It is no coincidence that the BRI was first unveiled in September 2013 by Chinese president Xi Jinping at Nazarbayev University in Kazakhstan’s capital Astana.

In the aftermath of the ill-prepared and poorly executed exit from Afghanistan that has been likened to a “Saigon Moment,” the West must maintain a regional strategy that does not concede Central Asia’s critical trade routes and dynamic markets to foreign powers.

Sir Halford Mackinder, the father of geopolitics, asserted that whoever controls Central Asia, the high seas, and Eurasia controls the world. The Nazis sought to achieve this in World War II by rushing to capture Azerbaijan’s oil—as did the Soviets during the Cold War. The importance of Central Asia requires the United States to take the lead in investing in security and economic opportunities in Kazakhstan and Central Asia. This can enable the West to project power across the heart of Eurasia to deter terrorism and guarantee the future of global security and economic prosperity. This is how confidence is re-established.

Barak M. Seener is the CEO of Strategic Intelligentia and a former Middle East Fellow at the Royal United Services Institute (RUSI). He is on Twitter at @BarakSeener.