After Afghanistan, the Crux of Biden’s Mideast Challenge Lies in Tehran 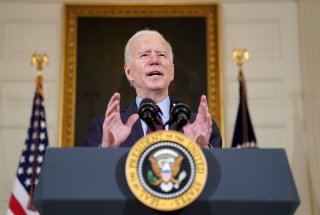 When he took the oath of office in January, President Joe Biden vowed “to make America, once again, the leading force for good in the world,” as well as to “repair our alliances and engage with the world once again.”

In the months since, he and his administration have worked to make good on that pledge, pursuing multiple diplomatic lines of effort across the broader Middle East. Of course, their signature effort is in renewed negotiations with Iran over the future of the Joint Comprehensive Plan of Action (JCPOA). And on that front, Biden’s foreign policy team—Secretary of State Tony Blinken, CIA Director Bill Burns, and National Security Advisor Jake Sullivan, among others—harbor core convictions with much to offer a renewed diplomatic process.

As Burns and Sullivan argued in a jointly written article that contact with Tehran is "not a reward for bad behavior," On the contrary, “diplomacy is the best way to test intentions and define the realm of the possible, repair the damage our unilateral turn has inflicted on our international partnerships, and invest in more effective coercion if and when it’s needed to focus minds in Tehran.”

No less important is Burns’s call for a regional security dialogue between Iran and the Gulf countries, which share an interest in de-escalating tensions. As he put it in 2019, “A lot will depend on the prospects for Saudis and Iranians finding some basis for regional co-existence—built not on trust or the end of rivalry, but on the more cold-blooded assumption that they both have a stake in stable competition.” As to the American role in this evolution, “our instinct should be to reinforce and encourage their dialogue, not sabotage it.”

Indeed, it is these two impulses simultaneously at work in the Biden administration—outreach to Tehran in a bid to lower tensions between the U.S. and its staunchest adversary, and the desire to build a concert system of sorts bringing Riyadh and Tehran into a less destructive form of competition—which must find complementary expression in its regional approach. In other words, while the administration forges ahead on reconstituting the JCPOA, it is crucial that America’s allies in the Gulf be included and safeguarded in that process.

Important as that balancing act was a month ago, it is doubly so today. The events of the last several days in Afghanistan have shaken many Americans deeply. The effect on America’s allies and friends around the world and in the region has been stronger still. Hostile actors, from Al Qaeda to Beijing, have been quick to taunt and menace America’s allies, promising them a day of reckoning in which Washington might well leave them to their own resources.

At the same time, if history is any judge, the fallout from Afghanistan will encourage Tehran to tie a harder line in the Vienna negotiations, already beset by impasse and mutual recrimination. Back in July, Iran's chief nuclear negotiator, Abbas Araqchi, insisted that, as a result of the recent presidential election in Tehran, the “Vienna talks must thus obviously await our new administration.” This prompted the U.S. State Department spokesman Ned Price to label Araqchi’s remarks "an outrageous effort to deflect blame for the current impasse."

While a mutually acceptable agreement between Iran and the United States which contains Tehran’s nuclear ambitions is certainly a goal to be sought after, Biden would be wise to seize the lull in negotiations to shore up America’s Arab flank and solidify the confidence of Washington’s historical allies. It may well be possible, as a fallback position, to come to a temporary deal that would freeze the crisis in American-Iranian relations in place. Both sides, having learned from the experience of the JCPOA, could then build a stronger and more lasting nuclear deal alongside talks aimed at defusing tensions in the region.

For that to happen, Iran would likely require some form of economic relief—whether directly in the form of an easing of Treasury sanctions or indirectly through the European Union, as French president Emmanuel Macron has suggested in the past.

And while many in the West were quick to interpret the election of Iranian president Ebrahim Raisi as a severe setback to the nuclear talks, Raisi enjoys greater latitude to negotiate with the West than did his more moderate predecessor. For one, his views are more closely aligned with Supreme Leader of Iran Ayatollah Khamenei, upon whom any deal ultimately rests. For another, he is more trusted by the hardline camp, which has expressed skepticism towards the negotiations. While Raisi’s checkered human rights history makes him far from the ideal interlocutor from a Western point of view, at the moment his ability to bring Iranian hardliners to the table may well prove more decisive to the negotiations’ prospects.

At the same time, Iranians must temper their own expectations. It is simply impractical to think that the United States will grant meaningful sanctions relief without assurances of an agreement that, at a minimum, extends the timeline of the JCPOA’s sunset provisions and addresses issues of verification and intercontinental ballistic missiles.

I do not envy the Biden administration's task. The pitfalls are many, the balancing between opposing forces complex and difficult, and the job largely thankless. But neither Biden nor his team have ever shirked the difficulties of duty before, and we should all offer our most fervent prayers for their success.

Ahmed Charai is a  publisher of The Jerusalem Strategic Tribune. He is on the board of directors for the Atlantic Council, an international counselor of the Center for Strategic and International Studies, and a member of the Advisory Board of The Center for the National Interest in Washington, and the global board of the Jerusalem Institute for Strategy and Security in Jerusalem.