After DACA, Will Trump Reverse on Foreign Policy Next? 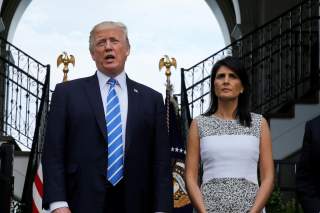 Now that President Donald Trump has indicated that he may pivot on his central campaign issue, immigration, some question whether the New York maverick remains committed to the America First principles that he enunciated during the campaign. His meeting last night about reaching an immigration compromise with Senate minority leader Chuck Schumer and House minority leader Nancy Pelosi is stirring up ire among vocal supporters, including Ann Coulter who asked this morning, “who DOESN’T want Trump impeached?”

Foreign policy is an arena on the right where Trump may sow further discord. Just as a phalanx of conservatives and realists is starting to warn about the increasing prominence of United Nations ambassador Nikki Haley, who could take over for Secretary of State Rex Tillerson, should his relationship with the president deteriorate further.

Last week, Haley gave a speech before the American Enterprise Institute, which was closely identified with the push for war in Iraq and has served as a traditional haven for D.C. neoconservatives and hawks (former Vice President Cheney is a trustee, former U.N. ambassador John Bolton is a fellow).  Last Thursday, CNN ran a widely-circulated, largely flattering profile of Haley, the current U.N. ambassador. And Politico magazine just dubbed Haley one of the top 50 people with ideas blowing up American politics, observing “it’s pretty much traditional Republicanism, with a glint of neoconservatism, but it feels like a bold embrace of principle in an administration that has unmoored itself from longtime American values.” Indeed, Senator Lindsey Graham, widely known as one of the upper chamber's most hawkish members, told the magazine, “From my point of view, what she says is music to my ears.”

Music to some, maybe, but a swan song to others.

In comments to me, a former senior White House official expressed “1,000 percent” opposition to such a nomination. In the view of some in the anti-globalist faction, now-decimated within in the White House itself, Haley has indeed been captured by foreign policy forces once openly hostile to Donald Trump, as has been roundly suggested recently.

But it isn’t just the populists who are concerned. More traditional actors sympathetic to a realist foreign policy are also worried. “I think she’d be worse,” than Tillerson, one State Department official tells me. “I mean, she’s made the transformation. Staked out her ground. She’s at least a hawk,” if not an outright neocon. Doug Bandow, a former Reagan administration official now at the CATO Institute, spoke at the National Press Club at the launch of the Center for Statesmanship, a new foreign policy entity based at Catholic University, on Wednesday night. He argued that the president has no fixed ideology but, crucially, “he’s surrounded himself with people, for the most part, who are hawkish.” Bandow added: “Nikki Haley I think is essentially a neoconservative.”

According to Daniel Larison of The American Conservative, “When it comes to Iran and North Korea, Haley is much more hawkish and ideological than Tillerson. If she were promoted to run the State Department, she would encourage Trump’s worst instincts in both cases.”

Scott McConnell, the founding editor of TAC, tells me,“Trump may have been the first Republican candidate to use ‘neocon’ disparagingly and win. … And then he goes and makes Haley his most visible foreign policy spokesperson?” Working with well-funded neoconservatives, as Senator Marco Rubio did, McConnell adds, “is a huge temptation for all up and coming politicians, Democrat and Republican—especially those with no particular interest or knowledge about the Middle East,” like Haley. The former South Carolina governor only had experience in state government as recently as a year ago.

McConnell notes that if you “need to raise money, the easiest place to get it is from donors who expect a hawkish and ‘pro-Israel’ position on the Mideast … And then there is a ready made roster of policy intellectuals and think tanks which will provide talking points and speeches and probably a degree of media enthusiasm.”

But from the vantage point of others, a change at Foggy Bottom might actually amount to little.  For this contingent, it all comes down to the president.

Harvard’s Stephen Walt, the realist eminence gris, tells me: “There are undoubtedly many people who could be more effective in this role, but only if they had the support and backing of the president. … Tillerson has been the least effective Secretary of State in modern memory, but he is working for a president who appears to put little value in genuine diplomacy and has little idea how to do it.” Julius Krein, the editor of American Affairs, which was originally founded mount an intellectual defense of the America First doctrine, puts it more bluntly: “In general, with respect to such an appointment, I’m inclined to quote a former secretary of state: what difference, at this point, does it make?”