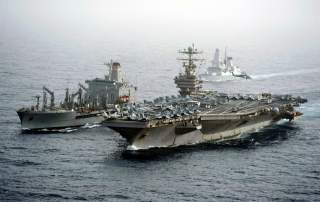 The U.S. defense industry is now in the sixth year of a downturn in domestic demand.  Pentagon spending peaked in 2010 at nearly $700 billion, and then began falling as overseas wars wound down and the Budget Control Act capped military outlays. Industry's biggest challenge isn't so much the scale of military spending as its composition, which is heavily weighted towards personnel and readiness at the expense of modernization.  In other words, Obama-era defense budgets are big on consumption, but neglect investment.

The initial response of the biggest defense contractors was to adopt the standard litany of tactical measures that they always embrace when demand from their main customer softens.  Divest under-performers.  Acquire niche businesses to fill out the portfolio. Do more share buybacks to strengthen stock prices. Increase foreign sales. Grow commercial revenues. And, of course, cut costs through plant consolidations and layoffs. All of the Pentagon's top suppliers have taken at least some of these steps, and the results have been spectacular.

How spectacular?  Every one of the biggest defense companies has seen its share price rise by over 100% in the midst of a defense downturn.  Earnings per share are way up, dividends are increased regularly, and operating margins are strong.  This isn't the way downturns are supposed to go.  A combination of investor-friendly financial moves and a favorable interest-rate environment has enabled the defense industry to weather the downturn quite nicely, if shareholder returns are any indication of success.

There's only one problem: revenues aren't growing.  With the exception of companies like Boeing and Rockwell Collins that began the downturn already owning major commercial operations, the companies have seen almost no growth in sales for five years.  For instance Lockheed Martin's revenues were about $46 billion in 2011, and about the same in 2015.  Northrop Grumman saw sales decline slightly for five consecutive years.  Boeing's defense unit has been steady at about $30 billion annually since the downturn commenced.

Stable sales aren't so bad when you consider what has happened to some other sectors of the economy during the same time period, and the top companies have been very disciplined in extracting good results for shareholders from revenue trends that more resemble utilities than tech companies.  But there comes a time when all the easily-implemented tactical measures have been applied, and companies need to start thinking more strategically about how their businesses are going to grow so they can keep shareholders happy.

For instance, Northrop Grumman bought back a quarter of its outstanding shares in a couple of years.  How many more shares can it reasonably be expected to buy back -- especially at current valuations?  Raytheon and Boeing Defense have both gotten international sales up to over 30% of revenues.  How much higher can they go?  Maybe this year's election will open the way to higher domestic weapons spending -- threats are growing and arsenals are aging -- but it's possible the Budget Control Act will continue to limit military spending through the end of the decade.

So the big contractors seem to have concluded that the time has come to do something strategic.  Lockheed Martin, the Pentagon's biggest supplier, signaled that turning point last year when it disclosed plans to exit many of its services businesses while acquiring the Sikorsky helicopter operations of United Technologies.  Services had been a big moneymaker for Lockheed at the height of Bush Administration defense spending, but revenues and returns began eroding in the Obama years.

Information Systems & Global Solutions, as the services unit was called, was a short-cycle business in a company that culturally is more focused on long-cycle hardware programs like the F-35 fighter.  So Lockheed Martin management in effect swapped out its short-cycle services operation for the longer-cycle Sikorsky business.  The company wrapped key defense-related services into its military hardware units, while selling services focused on civil agencies to Leidos (which will double in size as a result).

That move probably enhanced the appeal of Lockheed Martin to investors, since outsiders have long been challenged to understand all the moving pieces in the services business.  Helicopters are easier to understand.  However, at the same time Lockheed was exiting many services, rival Boeing Defense was signaling that it would increase the services component in its business mix.  That strategy became explicit last month, when Boeing's newly-minted defense chief, Leanne Caret, told Wall Street that services were a growth area for her unit.

Boeing's defense business, like its commercial business, historically has been all about things with wings.  That bias grew with its 1997 acquisition of McDonnell Douglas, then the world's leading maker of fighters.  But with the Obama Administration's termination of the F-22 fighter, F-35 totally dominates the U.S. tactical-aircraft market and Boeing has no role on F-35.  To make things worse, Boeing lost the competition for a new bomber last year, and its KC-46 tanker won't become cashflow-positive for many years.

Boeing must maintain a major presence in defense to compensate for cyclical downturns in the commercial-transport market.  Its current strategy for growing defense downplays near-term prospects in fighters while stressing military derivatives of jetliners (like the tankers), maintenance and modification of fielded aircraft, rotorcraft and space systems.  The company has an exceedingly robust portfolio of programs in those areas and it will compete hard for a new Air Force trainer, but acknowledging fighters will be a waning factor in results is a big shift.

Raytheon is another big defense company that has signaled increased interest in services, albeit high-margin tech services.  Its acquisition of WebSense last year and subsequent creation of the Forcepoint cybersecurity business is a major strategic move aimed at bringing "military-quality" cyber solutions to civil and commercial customers.  The Forcepoint initiative, following a string of cyber acquisitions, presumably means Raytheon is positioning to be one of the few surviving mega-players in cybersecurity as the sector shakes out.

What's surprising about this move is that Raytheon has been doing exceptionally well in the domestic defense market during the current downturn by leveraging R&D to take market share.  For instance, it won the Navy's Next Generation Jammer and Air and Missile Defense Radar despite fierce competition at least in part because of its leadership position in applying gallium-nitride technology to electronic components.  So making a big bid for cyber markets outside its core defense space is a significant change in focus even if it is leveraging defense skills.

Northrop Grumman, a company similar in size and competencies to Raytheon, seems to have undertaken an even bigger change.  Since CEO Wes Bush took over in 2010, Northrop has led the industry in delivering shareholder value -- so much so that it sometimes has seemed more focused on E.P.S. than R&D.  But its upset win of the Air Force's B-21 bomber competition appears to indicate a change of direction for the enterprise.  A company that long ago exited the large aircraft business bid aggressively to beat the opposing Boeing team.

Although the bomber development contract is a cost-reimbursable vehicle, it quickly transitions over to fixed pricing when low-rate production commences, so Northrop has assumed a fair amount of risk in under-bidding Boeing.  The willingness to make such a bid contrasts markedly with Northrop's decision to exit competition for the Air Force's new tanker in 2010 -- a program that arguably entailed less developmental risk.  The company has stated that it will be spending more on internal investments in the future, which probably means fewer share buybacks.

The bottom line on all these moves is that after five years of flat revenues, big defense companies are searching harder for ways of growing.  They will continue managing their finances carefully and rewarding shareholders, but they are more willing to take risks in pursuit of increased revenues.  With little visibility as to when congressionally-mandated caps on military spending may be lifted, the Pentagon's biggest contractors are becoming more creative about where they place their bets, signaling a shift across the sector.