After Helsinki, Can Trump and Putin Strike a Grand Bargain on Nukes? 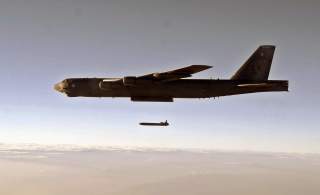 The unforgettable Helsinki summit will be remembered for President Donald Trump’s refusal to side with his own intelligence community over Vladimir Putin on the issue of Russia’s meddling in the 2016 election. So it was easy to miss some of the less prominent but important details—such as signals that U.S.-Russian talks on nuclear arms control may resume—which have floundered since 2010. This may be a significant opening for reducing the global risk of nuclear war that the two leaders must quickly build on.

Before the summit, things were looking bleak for the future of U.S.-Russian nuclear relations. Major arms reduction treaties are in trouble and the United States and Russia are in a new nuclear arms race, spending trillions on weapons they do not need. This could be the end of arms control as we know it.

But in Helsinki, Trump said nuclear weapons are “the greatest threat of our world today,” and that, “we have to do something about nuclear, and so that was a matter that we discussed actually in great detail, and President Putin agrees with me.” Putting more meat on the bone, President Putin said Russia wanted to “work together…on the disarmament agenda,” including the New START Treaty, U.S. anti-missile systems, the Intermediate-Range Nuclear Forces (INF) Treaty and weapons in space.

Time will tell if the two leaders are serious about these intentions. But if they are, they could break through stale strategic dogma and take a giant step toward reducing their excessive arsenals of these dangerous weapons. Like President Ronald Reagan and Premier Mikhail Gorbachev before them, Trump and Putin could use nuclear arms control to forge a new, transformative partnership.

If Trump (for whatever reason) wants to build his relationship with Putin and prove his diplomatic chops back home, there is no better opportunity than right now on arms control. There is a grand bargain in the offing, which would make both nations and the world safer and save hundreds of billions of dollars. As Trump said last year, “Let’s see if we can make some good deals with Russia. For one thing, I think nuclear weapons should be way down and reduced very substantially.”

So let’s go. Here is what Trump and Putin need to do to make nuclear arms control a centerpiece of an improved U.S.-Russian relationship:

First, the low-hanging fruit is to extend the 2010 New START treaty. The agreement caps U.S. and Russian nuclear arsenals at 1,550 strategic weapons each and allows for on-site inspections to verify compliance. The treaty expires in 2021, but can be extended for five years by a simple agreement. This should be a no-brainer.

But, alas, nothing is simple with President Trump, who may oppose extending New START just because it is President Obama’s treaty. (As similar illogic was applied to the 2015 Iran nuclear deal.) To get around that, Trump can do what Obama could not: strike a new deal with Russia to reduce long-range nuclear forces on both sides to 1,000 warheads or less. This is the “big deal” that will get Trump into the history books. But when Obama made this offer in 2013, Russia was not interested.

Is Putin interested now? Maybe. In March, Putin gave a major speech describing how President George W. Bush withdrew from the 1972 Anti-Ballistic Missile Treaty. This allowed the United States to deploy missiles meant to intercept Russian missiles, which eventually put a freeze on Moscow’s willingness to reduce its forces. As Putin put it, “If we do not do something, eventually this will result in the complete devaluation of Russia’s nuclear potential. Meaning that all of our missiles could simply be intercepted.”

Putin—showing unwarranted confidence in U.S. missile defense technology, which has not worked as advertised—announced that Russia would build a new generation of nuclear weapons to defeat U.S. missile interceptors, including new land-based missiles, nuclear-powered cruise missiles and underwater drones. But he also said he was open to future arms talks.

“There is no need to create more threats to the world,” Putin said. “Instead, let us sit down at the negotiating table and devise together a new and relevant system of international security and sustainable development for human civilization.”

Of course, Moscow may be willing to discuss new nuclear arms reductions only if Trump agrees to constrain U.S. missile interceptors. This condition doomed Obama’s efforts for a New START follow-on treaty, since Senate Republicans (for whom missile defense is an article of faith) would never approve a Democratic treaty that limited U.S. interceptors. But Trump, who apparently has complete control of his party, could make history by striking a deal with Putin that even a Republican Senate would approve.

Finally, Trump and Putin must also come to terms on the 1987 INF Treaty, which banned all mid-range land-based missiles from Europe. Russia is in violation of the INF, having deployed a prohibited cruise missile. However, Russia claims that U.S. missile interceptor deployments in Eastern Europe also violate the INF by providing a base for U.S. Tomahawk cruise missiles.

In exchange for Putin scraping his prohibited cruise missile, Trump should agree to remove U.S. missile interceptor bases from Romania and Poland. They are not needed for their declared purpose—defending against Iranian long-range nuclear-armed missiles, which do not exist. This would also help meet Trump’s goal of reducing U.S. military spending on NATO.

At Helsinki, Trump put politics over country and showed that he is much more concerned about “Trump First” than “America First.” Trump can now put country over politics by exploring a grand bargain on nuclear arms control that no other president since Reagan has been willing to touch. This would fit well with Trump’s desire to shake up the international system, make transformational deals, and be a statesman on the world stage. Unconventional as Trump may be, let’s see if he can get us back on track to reducing these very unconventional weapons.

Tom Z. Collina is the Policy Director at Ploughshares Fund in Washington DC.