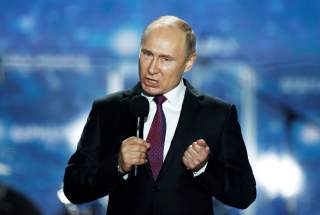 “Truly responsible nations don’t behave this way,” a senior national-security official in the Trump administration told reporters Thursday morning, referring to Russia. Officials have directly lambasted Moscow for interference in the 2016 election. The pronouncement immediately preceded the issuing of the newest round of U.S. sanctions on and condemnation of the country.

“There is no plausible alternative explanation” other than Russia, the statement reads.

It was a remarkable circling of the wagons for the administration from just days prior, when Sarah Sanders, White House spokeswoman, appeared deeply hesitant at the podium to fault Moscow for the attack. But by Tuesday morning, as the president addressed the sacking of Rex Tillerson, the White House was more clear.

“It sounds to me like it would be Russia, based on all the evidence they have,” President Trump told reporters. “It sounds to me like they believe it was Russia and I would certainly take that finding as fact. . . . As soon as we get the facts straight, if we agree with them, we will condemn Russia or whoever it may be.”

And condemn they have—with the joint statement and this new round of sanctions, which targets five entities including the FSB, the Russian security service and successor to the KGB; the Main Intelligence Directorate (GRU); and the Internet Research Agency (IRA).

“I see these sanctions as a ratcheting up of the political messaging in the ongoing US-Russia conflict, a ratification and endorsement of Mueller’s findings, and an effort to find common ground with Congress, following through on the July 2017 CAATSA legislation,” Matthew Rojansky, director of the Kennan Institute at the Wilson Center, tells me.

“Though I doubt it will have much practical impact, the notion of sanctioning Russia's intelligence agencies is interesting,” Emma Ashford of the Cato Institute explained to me. In her view, Thursday’s move is “a fairly big step to be taking compared to previous rounds of Russia sanctions.”

It also accused Russia of an ongoing campaign to hack the United States’ energy grid; pains were taken by the White House to emphasize the ongoing nature of the Russian matter.

“These targeted sanctions are a part of a broader effort to address the ongoing nefarious attacks emanating from Russia,” noted Treasury Secretary Steve Mnuchin on Thursday.

Rojansky breaks down where these sanctions could particularly hurt Russia, in practice: “If the US pursues so-called secondary enforcement,” the maneuver would “force governments and institutions in third countries (e.g. in Europe, Asia, Latin America) to choose between doing business with these individuals and doing business with the US.”

The Trump administration, heavily criticized by some quarters as soft on Moscow, went out of its way to argue that Thursday’s sanctions were in addition to the rigorous reprimands that the White House has already rolled out. But some critics have begun chiding the bellicosity of the efforts and the language, arguing that the president himself needs to more thoroughly address the Russian issue himself, in a personal statement. “While we should applaud the Trump administration’s decision to enforce the Congressional sanctions on Russia. He needs to address the menace in Moscow in his own words and on camera,” Bloomberg columnist Eli Lake tweeted.

Cato’s Ashford argues that politics and appearances are very much at play. According to her, the impact of some of the sanctions will be minimal. “These sanctions are more symbolic than anything else,” she told me. “Sanctioning the Internet Research Agency at this point is like bolting the barn door after the horses have escaped. . . . While the restrictions on individuals might bite, broader sanctions on Russian companies and entities have had little-to-no effect on the Russian economy.” What course Trump himself will ultimately stake out remains unclear. But his administration is starting to adopt a more assertive stance toward Moscow.