After ISIS, What's Next for Iraqi Christians? 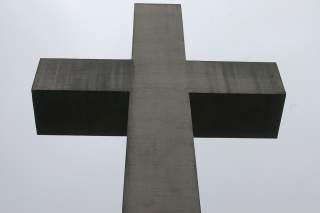 Christmas has been a dangerous time for Christians in Iraq. In 2013, three bombings targeted Christians in Baghdad, killing 38. Two days before Christmas 2016, there were reports that at least two Christian men were assassinated in Baghdad’s Ghadeer neighborhood. The attack targeted shops alleged to sell alcohol. Vian Dakhil, a Yazidi member of parliament, tweeted a condemnation.

In October, the Iraqi army and Kurdish Peshmerga launched an offensive to liberate Mosul from the grip of Islamic State. They also liberated Christian towns and villages on the Nineveh plains. Bakhdida, once home to fifty thousand people, was retaken on October 21st and the Christian town of Bartella was liberated the same day. In addition, areas where Christians lived in Bashiqa, and monasteries and church in Tel Keppe were retaken. But what the Assyrian Christian community found left behind was destruction by ISIS. Romeo Hakkari told Kurdistan 24 that “in some parts 80 to 90 percent had been destroyed.” He is the Secretary General of the Bat al-Nahrain party, one of several Christian political groupings that emerged after the 2003 war.

As Christmas came to Iraq, the remaining Christians attended mass throughout the country. Most Iraqi Christians are Catholic and observe the holiday on the 25th. An estimated two hundred thousand became refugees from ISIS persecution in 2014. According to Juliana Taimoorazy of the Iraqi Christian Relief Council there were 1.6 million Christians in Iraq before 2003 and around 150 thousand today. These remaining faithful live on a land of ancient Christian presence. Taimoorazy, who is a Christian from Iran, says that Christianity is reputed to have come to Iraq with St. Thomas the Apostle. In 2015, ISIS destroyed St. Elijah’s monastery, razing 1,400 years of history to the ground. Yet secure behind the Kurdish and Iraqi army frontlines, Christian monasteries survived the onslaught and communities, such as those in Ainkawa, Irbil, and Baghdad. They also took up arms to fight ISIS, forming several Christian militias. These militias are allied with different political parties in Iraq. For instance, the Nineveh Plains Forces (NPF) in the Christian village of Telskop are closer to the Peshmerga, whereas the Nineveh Plains Units (NPU) are closer to the Popular Mobilization Forces or Hashd al-Sha’abi.

As the Nineveh plains have been liberated, these differing forces have worked hard to show off their credentials. Kurdish Peshmerga paraded in a church in Kirkuk and the Kurdistan Regional Government has broadcasted itself as a protector of the area’s Christians. However Assyrians also want support for rebuilding in Nineveh plains and greater autonomy.

Athre Kado, media spokesperson for the NPU says that his organization was started out of the Assyrian Democratic Movement in August 2014.  This was after ISIS had expelled Christians from Mosul. “The number of men who registered reached two thousand and ADM worked to get permission from the Iraqi government in September.” They eventually set up a training camp near Sulaimaniya, Kado says in an email. By January 2015, around 750 men were housed there and supported financially by the Assyrian diaspora and other supporters. They deployed in several places, including Alqosh, a Christian town near Duhok that overlooks the Nineveh plains and where the tomb of the Prophet Nahum is located.

“The coordination for making the [training] camp with the Peshmerga, which are the force that controlled the Nineveh Plains militarily, took more than nine months,” he says. By November 2015 men were completing basic military training and living in caravans without electricity. They lacked proper equipment. Through October 2016 an additional group of three hundred and then two hundred militia members received permission to train.

“The Assyrian people are suffering a disastrous life, inhuman, far from their homes which were mostly burned, damaged and looted, their decades of hard work disappeared,” Kado says. After the Mosul offensive began the NPU joined the Iraqi army and its Counter-Terror Forces in Bakhdida. They also entered the nearby villages Karemlesh and Bartella, just a few kilometers from the outskirts of Mosul city. “The international community has been helping rebuild the town [of Bakhdida].” The local Assyrian community lacks the financial resources to support the rebuilding.

For the NPU, military operations related to retaking Mosul have ceased and they are concentrating on working and guarding the liberated villages in Nineveh. Kado says that after Mosul city is liberated it may be difficult to return after ISIS because “ISIS is not the only problem for Assyrians there.”  Prior to 2014, Mosul was a center of Islamist insurgency against the United States after 2003 and then against the Iraqi central government. It was the last place to be retaken from insurgents after the U.S. troop “surge” in Iraq in 2007. In June 2007 Father Ragheed Ganni was murdered alongside two of his aides in front of the Holy Spirit Church in Mosul. Archbishop Pauls Faraj Rahho was kidnapped in the Al-Nur district of Mosul and murdered in February 2008. In November 2008, the Associated Press noted that attacks in Mosul were down to seventy a week from a peak of 130 or more earlier in the year.  Many of these attacks also targeted Christians. Throughout Iraq the instability caused Assyrians to emigrate and Christian institutions were relocated to the more secure Erbil in the KRG. This included St. Peter’s Major Seminary, which moved from Baghdad to the Kurdish region.

The NPU supported creating a “Nineveh plains province for the original and historical nations in it and the management and military should be controlled by the Nineveh plains people themselves.” This is a form of autonomy, more similar to what the KRG has. “Assyrian politicians in and out of Iraq have lobbied for years to give Christian’s autonomy there,” wrote Judit Neurink in Rudaw in 2014. She wrote that Christians were 40 percent of the proposed province. There was even talk of an independent Assyrian state in the diaspora. However the ISIS invasion changed all that. Now these demands are back because local groups, such as the NPU, think that they are best placed to provide security and their own administration for Assyrians.  These desires overlap with policies of the KRG and Sunni leaders from Mosul such as Atheel Nujaifi who also want Sunni Arab autonomy. The Assyrians are caught between larger groups. “Any policies that are with our peoples we are with it, otherwise we will try with all our abilities to stop it,” says the NPU spokesman. They describe their relations with the PMU as one of many relations with groups in Iraq that are fighting ISIS. He says that to change the extremism that caused ISIS it was important to tackle education and Islamist propaganda that has spread in the country.

Taimoorazy also supports a province for minorities in Nineveh. “The only way it will be done is where our boys and girls protect our own, and we have the observation of the international community and the Iraqi government equips and trains these soldiers.” Her organization has adopted Telskop to support children during Christmas. This is the third Christmas many Assyrians will spend away from their homes, and lack of support for rebuilding infrastructure and clearing improvised explosive devices and tunnels left behind by ISIS may mean the better part of another year.

The bells in churches across northern Iraq may have been rung again during Christmas, but the future is unclear. The rise of Christian militias such as the NPU or NPF are part of the patchwork of other militias that arose to fight ISIS. However the demographic changes on the ground and the need to repopulate Christian areas will be key to any attempt to carve out elements of autonomy.