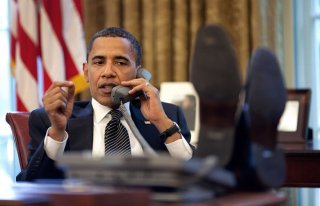 ISIS, Russia, Iran and China all share a common concern: the United States. In short, it’s a problem. As conventional states, three of them have a view of how the world ought to be organized, but America stands in their way. They all also have the same idea—to win without fighting.

Of the four, ISIS has shown it is the least risk-averse. Abu Bakr al-Baghdadi and his boys have sent clear signals they are willing to bloody the other side and risk America’s wrath. Likely as not, ISIS believes the caliphate can get away with it.

Of course, in a way ISIS is already fighting the rest of the world. Sen. Dianne Feinstein (D-Calif.) noted in a recent interview that “we have done about 8,000” bombing runs against the caliphate. Further, the U.S. has given aid and support to groups fighting ISIS, as well as putting a small number of special operations forces in harm’s way. Still, the U.S. has refrained from confronting ISIS directly on the field of battle.

That the U.S. government has no interest in going back to Iraq suits ISIS just fine. The one fight ISIS can’t win is a battle for territorial control against a superior conventional military force.

On the other hand, unlike Russia, Iran and China, ISIS has a problem. It is being attacked. While the caliphate has shown it can take bombings, drone strikes, skirmishes with Kurds and Shia militias—as well as haranguing from Obama, Putin and other world leaders—that’s not good enough.

If the caliphate is going to keep up the narrative that it is the inheritor of the historic Islamic empire, it must demonstrate that it is powerful and growing. That means not just the capacity to play defense, but to take the offensive and punish its enemies.

Russia just acknowledged that the plane brought down in Egypt fell from a terrorist attack. Chances are, this was retribution for Moscow’s support for Assad. Not long after, ISIS launched a series of deadly bombings in Beirut, punishing Hezbollah for meddling in the Syrian Civil War. Then came Paris, a horrific terrorist attack that demonstrated real reach and capability.

As for the U.S., ISIS has been trying to reach out and touch us for years. Indeed, ISIS has already inspired several terrorist plots against the homeland. All these efforts look to be part of a concerted campaign by ISIS to make the point that war is a two-way street.

Of course, every time ISIS strikes out, it risks prompting a terrible response. From Baghdadi’s perspective, though, this must appear a risk worth taking.

Before 9/11, Osama bin Laden made a similar calculus. In his now infamous fatwa, he called America the “paper tiger,” predicting that if attacked, they would “run away.” Of course, the United States did the opposite.

Driving Al Qaeda from Afghanistan was a deep humiliation. In turn, Al Qaeda desperately searched for a way get back into the game. Bin Laden looked to Iraq after the U.S. invasion as an opportunity to revive the Islamist insurgency. The hope of revenge was thwarted by the surge of U.S. troops and the Sunni awakening, which once again drove Al Qaeda from the field. Once again, the value of bin Laden’s stock fell.

So far, Baghdadi has every right to think that might be a good call. President Obama, even after the terrible attack in Paris, refused to backtrack on his assessment that ISIS has been “contained.”

Further, in responding to the terrorist strike, Obama sent every signal to suggest that the U.S. would stay a steady course. That might mean sending slightly more military might into the region, but invading ISIS is still off the table. Will that make the group’s gamble worth taking? Time will tell.

James Jay Carafano, Ph.D., is vice president of the Davis Institute for National Security and Foreign Policy and the E. W. Richardson Fellow at The Heritage Foundation. You can follow him on Twitter: @JJCarafano.