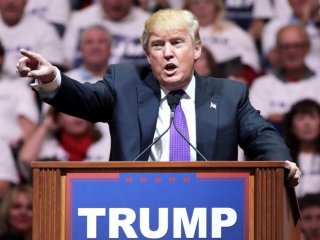 After Hillary Clinton’s big victory in South Carolina,  Bernie Sanders says the race is “just beginning.” Sorry, Bernie, it isn’t. After Sanders’s victory in New Hampshire, the familiar dream of the American left of a spontaneous, grass roots uprising against injustice and power took shape again. But the notion that Clinton was in any real danger was always bunk.

For Sanders, a walking cartoon of socialism, or someone like him to prevail, the Democrats would have to be as divided as the Republicans. That’s not happening. As the Wall Street Journal editorial page recently pointed out, the Democrats want to win and are not about to unleash their “inner socialist” this year. The Journal’s addendum to this, of course, is that the GOP, in succumbing to the charms, such as they are, of Donald Trump, is following a diametrically opposed course. Trump, we are told by no less an authority than Journal columnist Karl Rove, is a “dream opponent” for Clinton.

But is he? The view from a more detached observer across the pond is somewhat different. In an email to me this morning, the estimable Geoffrey Wheatcroft, a regular contributor to the National Interest, commented on the bemusement he felt upon reading Robert Kagan’s recent epistle in the Washington Post. It announced Kagan’s defection from the GOP to the Clinton camp. His encomium to Clinton described Trump as “the GOP’s Frankenstein.” Wheatcroft suggests that while Trump is terrifying the Republican establishment maybe the Democrats should also regard him with apprehension. “It seems inconceivable that [Trump] could win in November,” Wheatcroft writes, “but a few months ago it seemed inconceivable that he would the nomination, and that now seems likely.” He adds, “the Democrats seem even likelier to choose someone who, whatever torch Kagan carries for her, is a rather dislikable and untrustworthy woman, a mediocre politician, and, I surmise, will prove a weak and vulnerable candidate.”

There is indeed a path to victory for Trump. As Zach Carter and Ryan Grim point out in the Huffington Post, Trump needs to go for the Midwest. By focusing on the white vote, he can drive up his numbers, attempting to compensate for Clinton’s advantage with minorities. The aim would be to peel off enough white votes to disrupt the coalition that Obama assembled to cruise to victory in 2008 and 2012.

According to Carter and Grim, “The Rust Belt is disproportionately white. While there are pockets of color—in Philadelphia, Flint, Detroit, Milwaukee—the states are much whiter than the national average. America is 62 percent white, according to census data. Michigan, by contrast, is over 75 percent white, and Pennsylvania's population is more than 77 percent white. More than 80 percent of Ohio is white, as is over 82 percent of Wisconsin.”

Similarly, Paul Waldman points out in the Washington Post,

“even if Trump alienates women, his displays of chest-thumping dominance could appeal to lots and lots of white men, particularly those who are lower on the income and education scales (as Trump said after his Nevada win yesterday, ‘I love the poorly educated’). That could make Trump competitive in Rust Belt states like Pennsylvania, Ohio, and Michigan that have been in the Democratic column in the last two elections."

Whether Trump could successfully implement this approach is another question. His rumbustious personality means that he could careen off in pretty much any ideological direction. That is why he terrifies establishment conservatives so much.

The other question is, as Wheatcroft puts it, how weak and vulnerable Clinton really will be during the general elections. Clinton will never be loved by the electorate but she can grind out the race for the nomination and will follow the same approach during the general election. Already she has 453 superdelegates backing her. Sanders has 20. That the Obama Justice Department will indict her for her secret server seems unlikely.

The 2016 race, then, may be coming to a head faster than many thought a few weeks ago. Soon Clinton will be able to put Sanders completely in her rear view mirror. The coming months may well feature a brutal struggle between Clinton and Trump, pitting the minority coalition created by President Obama against an attempt to sweep the tables with the white vote. By November, it will be clear whether Trump truly is a dream candidate for Clinton or whether that is itself an illusion.