Are the Neocons Finally with Trump? 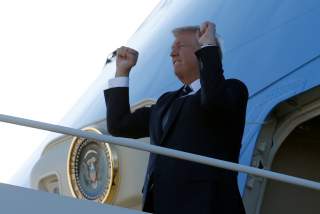 Donald Trump finds himself in perhaps his most peculiar company yet as president: among the neocons. His decision to decline to certify Iran’s compliance with the 2015 nuclear agreement is earning him plaudits from some of his most bitter critics. A case in point is Bill Kristol, editor-at-large of The Weekly Standard, who Trump once personally singled out on the campaign trail for castigation. And the plan laid out by the president on Friday was near lockstep with what neocon columnist Eli Lake had been advocating for weeks. Indeed, Trump’s Friday address to the nation—replete with phrases like “rogue regime” and accusations like “there are also many people who believe that Iran is dealing with North Korea”—did seem like a green light to party like it’s 2003.

But the picture is likely more complex. For one, many of the would-be neocons are either shying from the classification or think Trump is still sort of bluffing. “In language, yes,” Trump is now a neocon, says Tom Rogan of the Washington Examiner. “But the practice of power is realist. Balance in the Middle East, pushing China to push North Korea for a deal, and pressuring Israel towards a Palestinian peace deal.” The Washington Examiner is optimistic about Trump’s move, with its editorial board hailing the president’s “realist” maneuver against Tehran. Stephen Walt, the realist scholar at Harvard, says Trump’s move on Iran “is being applauded by neoconservative hawks who still want either war or regime change or both, but he has yet to embrace their full agenda or brought them into the inner circle.”

And others in the year 2017, view “neocon” as an unhelpful slur. Behind the scenes, among senior Republicans and administration officials, an ascendant foreign-policy power player has been the Foundation for Defense of Democracies (FDD). Kristol namechecked the group in a congratulatory tweet over the weekend: “Props to @FDD, @CliffordDMay, @mdubowitz, @thomasjoscelyn, and others who laid the groundwork for a new and serious policy towards Iran.” “Critics use it as a pejorative,” FDD’s Joe Dougherty tells me about the “neocon” label. “Hawkish is OK.”

Eliot A. Cohen, former counselor to Secretary of State Condoleezza Rice and often labeled a neocon, continues to take a very dim view of Trump. “I really don't think the neocon tag means much in this setting. Or any setting, other than 1970s and 1980s politics,” Cohen tells me. “I don’t think he is listening to Bill Kristol about anything and have no idea which of the others he pays attention to.” He adds: “This man hasn't embraced anything or anybody other than himself: it’s foreign policy by id.” During the campaign, Cohen was a prominent NeverTrumper. After Trump was elected, he urged national-security professionals to work for the incoming administration, then publicly retracted that recommendation.

Indeed, the wounds Trump has inflicted on the neocons in the past appear to be too fresh for them to embrace him wholesale. “I like Gorsuch, decertifying Iran and leaving UNESCO. But they're not worth the degradation of our public life that is the Trump presidency,” Kristol tweeted Tuesday.

But others are not content to let the president off the hook for his association with some of the players who got the United States into Iraq. Scott McConnell, founding editor of The American Conservative, says of the FDD: “A bit surprising the FDD isn’t universally understood as basically a very hawkish organization… They shilled hard for the Iraq war.” McConnell argues that the FDD is replete with advocates of “regime change in Iran, which basically means an American war to take down the government, on the Iraq model.”

John Hannah, a senior counselor at the FDD and a former deputy national security adviser to Vice President Dick Cheney, counters, “I think the president acts most frequently as an American great power nationalist. . . . He doesn’t appear to have any inclination to have America get involved in far-flung trouble spots.” But Hannah notes, “none of that means that when President Trump does perceive a serious threat to U.S. national interests, he won’t act very aggressively to confront it, as he’s done with both North Korea and Iran.”

Hawks such as former UN Ambassador John Bolton, Sen. Tom Cotton and current UN Ambassador Nikki Haley helped persuade Trump to adopt a hardline on the Iran nuclear deal. All three have extensive personal and financial ties to hardline donors like Sheldon Adelson. Bolton—who, despite being one of the more famous Bush administration officials, also assiduously denies the “neocon” label—was with Adelson in September when he helped convince Trump, by phone, to flay the Iran deal during his UN General Assembly address.

Bolton was spotted entering the White House last week, days ahead of the president's announcement. And as I’ve reported, Bolton’s plan for decertification was written at the behest of former White House Chief Strategist Steve Bannon. Bannon has told me he thinks Bolton has converted from being a Bush guy to a Trump guy, unlike many figures of W’s era (who he deeply loathes, if his recent 60 Minutes interview is any indication). Bannon told the Value Voters Summit over the weekend that Judge Roy Moore’s victory in Alabama was providence, and helped push the president over the finish the line in his decision; Moore is hawkish and “absolutely” a Bannonite on Iran.

But Daniel McCarthy, editor at large at The American Conservative, thinks it’s perpetual open season for the president’s favor. “Trump is Trump, which disappoints his realist would-be allies but will soon disappoint his neocon would-be allies, too,” McCarthy tells me. “What Trump is doing with the Iran deal and everything else is neither the realist nor the neocon playbook. . . . I suspect a Haley or a Bolton would be just as frustrated as [Secretary of State Rex] Tillerson after a few months,” were they to assume his role.

“The question,” McCarthy says, “Is who's more adaptable: will either side stick with Trump and keep pressing their case no matter how many curveballs he throws them? That side wins.” Game on.