After the Nuclear Deal: Rouhani's Game Plan for Iran 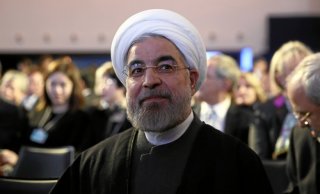 After a long, serious, and sustentative engagement, Iran finally struck a historic deal in Vienna with the P5+1 over its controversial nuclear program. The Iran deal lifts oil and financial sanctions in exchange for curbs on Iran’s nuclear capabilities. The deal also heralds the revival of agency and diplomacy in dealing with the Iranian nuclear crisis that has been at the epicenter of the Middle East over the last decade. Few crises have lasted this long at such tempo in the post-Cold War era. The deal that was reached is the most significant agreement between the Great Satan and the Axis of Evil in more than three decades of animosity.

Although a wave of hope has swept Iran since the agreement was reached, the Scottish-educated cleric that is Iran’s president has to accomplish the impossible mission of resuscitating a deteriorating economy. Now the more important question is what is Rouhani’s domestic strategy after the post-Iran Nuclear Deal in Vienna? Undoubtedly, resolving the nuclear crisis will empower Rouhani’s team to mobilize public opinion to support for the deal and therefore Rouhani’s domestic interests.

On top of that, the parliamentary election is due to be held in March 2016. While the historic deal in Vienna could tilt the power equation in Rouhani’s favor, the unexpected results of recent elections in Iran have left many on the edge of their seats. Thus, to keep his superior position in the current situation, Rouhani needs to take his second major step now in Iran, not Vienna.

Rouhani’s post-Vienna strategy is highly predicated on the uniqueness of the constellation of political institutions within the Islamic Republic. As a semi-presidential and quasi-theocratic state, the uniqueness of the Islamic Republic stems from the hybrid base of the regime that combines both democratic and non-democratic elements.  It is, in short, a fragmented semi-authoritarian” regime.

The origin of this fragmentation traces back to the multifarious factors derived from the diverse social classes and ideologies of the revolutionary forces united against the Shah’s regime in the Islamic Revolution of 1979.

Theoretically speaking, fragmentation and continuous tension among elites of a non-democratic regime creates the potential for collapse or, at the very least, undermines the ruling elites’ capacity to control society. Ironically, the fragmented institutions in Iran have empowered the survival of the Islamic regime through effectively controlling the political process. The longevity of the Islamic Republic stems from such a unique fragmentation through which political institutions bolster and nourish cleavages and tensions, even deep and insurmountable, among insider elites. They also allow for a degree of pluralism. At the same time, these cleavages ensure regime maintenance and weaken the emergence of a complete democratic transition.

It is interesting that insider elites have created differing interpretations of the meaning of “Islamic Republic” that run counter to one another. While the reformists accentuate the empowerment of republican and democratic institutions, the hardliners strongly support the absolute power of the Supreme Leader and related unaccountable institutions.

Such opposite attitudes determine different strategies in ruling the country. The hardliners’ final strategy hinges on the “insider/ outsider” dichotomy, seeking to exclude their rivals at top and make a passive, homogenized society; a strategy of “exclusion at top/ passive unity at bottom”.

Conversely, the reformists main strategy is “pressure from bottom, negotiation at top.” One of the reasons the reformist strategy failed during the reformist era of 1997-2005, was that it produced a dual sovereignty that unintentionally resulted in a Manichean arena within the polity; a desirable circumstance for the hardliners to highlight “insider/outsider” dichotomy and finally exclude the reformists.

Contrary to both reformists and hardliners, Rouhani’s policy has suggested a more subtle strategy. This strategy is dated back into a broad reformist-centrist coalition, including former presidents of Ali-Akbar Hashemi Rafsanjani and Mohammad Khatami, as well as former Parliament speaker Ali-Akbar Nateq Nouri that brought Rouhani a surprising victory in June 2013.

This coalition looms large on part of the “unity at the top” part of his strategy. In this vein, Rouhani has attempted to maintain his primary coalition and even expand it. That is why he appointed Rahmani Fazli to the Interior Ministry and Pour-Mohammadi to the Justice Ministry, both of whom are conservatives and whose candidacies were initially challenged by the Green and reformist grassroots who voted for Rouhani. The Scottish-educated cleric is aware that good politicians prefer to have enemies inside the tent rather than outside aiming inwards.

From a broader perspective, what lurks beneath the Rouhani government’s strategies is Rafsanjani’s suggestion for resolving the economic and political crises. Seeking to reduce the deep rifts that flowed from the 2009 election, the solution proposed by Rafsanjani, the Expediency Council chief who is widely seen as the eminence grise behind the Rouhani camp, is strongly grounded in the idea of a “national unity” government, manifested in his well-balanced cabinet comprised of designated political figures for different ministries and institutions of the government. In fact, Rouhani’s cabinet has so far consisted of both moderate reformists and traditional conservatives, covering widely fragmented groups within the polity.

Meanwhile, Rouhani’s strategy would prepare a vital domain for multifarious NGOs and institutions. Chief among them would be student associations. Once nourished by Khatami’s political development, the core of Iran’s fledgling civil society was effectively circumscribed during Ahmadinejad's presidency.

This is why after Rouhani’s victory reformists attempted right to get only two ministries, namely the Ministry of Education and the Ministry of Science, Research and Technology. These ministries are crucial for the rehabilitation and consolidation of civil society.

All this underscores that Rouhani’s strategy is to create a balance between “security” and “freedom;” a strategy with tremendous effects on Iran’s society: “unity at top, plurality at bottom.”

This strategy is also consistent with Rouhani’s political identity. Rouhani’s centrist stance within insiders has given him an opportunity to maintain ties to most of the regime’s most significant power centers; which itself derived from his long-term experiences in roles related to Iran’s complicated national security.

The final culmination of Rouhani’s strategy would be a strong state; a state with a high degree of institutionalization, socio-economic organizations, and a flexible crisis-management policy; rather than a state with an iron fist policy.

In this sense, Rouhani’s strategy seeks to reduce the state’s intervention in the civil society, particularly in cultural-societal domain, such as women Hijab, and relieve the pressure on non-governmental Cinema, Books, etc.

The strategic point here is a specific relation between the Supreme Leader and Rouhani. Though temporarily down, hardliners are by no means out. Their strategy now hinges on spoiling Rouhani’s relationship with the Supreme Leader and isolating him through framing him as a reformist, rejecting his semi neo-liberal economic policy, and criticizing the nuclear deal.

Serving as an Islamic Republic’s insider with 16 years as head of the Supreme National Security Council, Rouhani’s main intra-regime policy is to assure Ayatollah Khamenei that his power will not be jeopardized. That is why he has shunned any signs that could have shown his disloyalty to the Supreme Leader. Rouhani is careful not to cross the red line.

But the key point on Rouhani’s strategy, though over-emphasized, is the very meaning of moderation. Rouhani knows well that moderation is based on balancing between his supporters’ demands and reality. More importantly, moderation is neither to seek a median between two political poles, nor to combine them. Rather, it stems from a deep respect for the plurality of people’s lifestyles.

Arash Reisinezhad is a Research Fellow at the Middle East Studies Center and a PhD candidate at the School of International and Public Affairs, at Florida International University.