Against All Odds: The UN Mission to Protect South Sudan 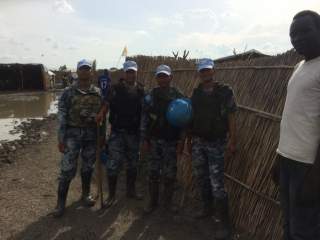 Today marks four years since South Sudan became an independent nation—a triumphant moment for the country and for the international community. But vicious fighting and deliberate attacks on civilians have overshadowed today’s Independence Day celebrations.

Last week, the United Nations Mission in South Sudan (UNMISS) released a report detailing appalling human rights violations committed during renewed fighting since April in South Sudan’s Unity state. The report raises serious concerns about the recent increase in the intensity and brutality of fighting and highlights the mounting pressures placed on the UN peacekeeping mission as it attempts to fulfill its mandate to protect civilians from violence.

Despite enormous challenges, UNMISS has done a commendable job at protecting civilians so far. South Sudan has been plagued by widespread violence since a political power struggle between the young country’s president and its former vice president turned into a civil war in December 2013. As the fighting spread, people began to run to UNMISS bases for protection.

Currently, over 140,000 people are living on UNMISS bases across the country, and many of them have been there since the civil war began. Had UNMISS not been present to allow them into their bases and offer them protection from the fighting, it is likely that many of them would have been killed.

A new round of political negotiations in Arusha, Tanzania has begun recently, but observers do not anticipate that the violence will end anytime soon. Early in the conflict, UNMISS had hoped that it could find a way to safely and voluntarily relocate displaced persons off its bases in the near future. Over time, however, the mission has come to realize that there is no short-term solution to the problem.

Accommodating these huge numbers of displaced persons for such a long time has presented UNMISS with enormous security, logistical and resource challenges. Nowhere is this more apparent than in Bentiu, the capital of Unity state. Even though the rainy season had only just begun during my recent research visit there, I waded through slippery mud almost up to my knees inside the base, which most of the residents had to navigate barefoot. I passed by flooded latrines and pools of standing water that posed grave health risks for the displaced persons living on the base. As the brutal government campaign sweeping through Unity state continues and as food insecurity worsens, the total number of civilians seeking protection at the Bentiu base is projected to jump from 80,000 to 100,000 in the near future.

UNMISS peacekeepers at the Bentiu base are approaching their mandate to protect civilians on a variety of fronts—police, military and civilian. UNMISS police work to maintain safety and security within the base, shouldering a number of demanding and unexpected tasks, such as breaking up riots, responding to crimes such as rape and murder, and controlling gang violence.

They do all this with a limited mandate that does not, for example, give them the authority to conduct arrests or to investigate crimes. To accommodate for their small numbers relative to the total population in the Bentiu base, the police have used innovative methods such as establishing and working with community watch groups—members of the displaced population that act as “eyes and ears” for UNMISS police within the community and to prevent minor disputes from escalating into violence.

UNMISS soldiers also have to manage with insufficient resources and personnel to guard the perimeter of the base against external attack. A new extension site, added to the base to accommodate the rising number of displaced persons, is protected only by berms (soil ridges that act as makeshift barriers) and still lacks basic security features such as barbed wire and perimeter lighting. Meanwhile, UNMISS civilian personnel are coordinating with humanitarian organizations that provide relief services, conducting human rights investigations, undertaking efforts to mediate and resolve local conflicts, and liaising with local authorities.

UNMISS’s efforts in Bentiu have not been without setbacks or failures. In particular, there have been reports of fighters attacking displaced persons around the immediate perimeter of the Bentiu base in clear view of UNMISS soldiers. South Sudanese government soldiers have shelled or fired into the base on several occasions. The mission has also been criticized for its limited efforts outside the Bentiu base, with many humanitarian organizations urging it to establish a greater presence in the rest of the state. Moreover, the majority of soldiers and militia fighters in the state have recently moved away from Bentiu, toward the southern part of Unity state, and it remains to be seen how UNMISS will cope if and when those fighters return to Bentiu town.

Despite these problems, UNMISS’s work in Bentiu has helped to keep 80,000 people alive in the face of immense challenges, and that is a considerable achievement. But a peace deal between the leaders of the two main warring parties still appears out of reach, and even if such a deal were to be brokered, it is unlikely to address the conflict dynamics driving many of the commanders and foot soldiers carrying out the violence.

The looming threats of famine and economic crisis will only exacerbate the situation. The UN’s leadership in New York and governments that fund UNMISS must prepare to provide the mission with enough diplomatic support and resources to continue to protect tens of thousands of people within its bases for many months, if not years, to come.

Aditi Gorur is a research analyst at the Stimson Center, a nonpartisan international security think tank in Washington, DC. She recently returned from a research trip to Bentiu, South Sudan.