Aid and Advice Won’t Be Enough for Afghanistan 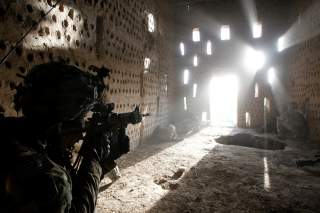 Donald Trump’s long-awaited speech on Afghanistan has been rightly criticized for its failure to define a clear objective for sustained U.S. commitment to the country and its recitation of the same interim goals of preventing a Taliban takeover and denying terrorist safe havens. Beyond these significant flaws, however, internal inconsistencies in his vision suggest that enhanced American engagement has a low likelihood of success.

The president declared that the United States “will work with allies and partners to protect our shared interests.” Unfortunately, this injunction ignores the fact that the United States and whatever local government it is attempting to assist often have very different interests at stake. Both parties may agree that defeating the insurgent group in question is important, but the way they prefer to go about it can diverge significantly.

This might not be a problem if the local partner in question is highly capable. However, effective, legitimate governments rarely lose control of substantial portions of their country. Regimes needing external assistance to combat terrorists or insurgents are almost by definition flawed in some key respects—be they weak, incompetent, fraudulent, abusive, or all of the above. In turn, the same governmental shortcomings that facilitate the emergence of an insurgency also undercut the effectiveness of a counterinsurgent response.

Such is the case in Afghanistan, a country with a government that is seen by many observers to be as much of an obstacle to the achievement of U.S. goals as the Taliban. Successive Afghan administrations have failed to mobilize widespread public support. Corruption and abuses by senior officials alienate public opinion and undermine the legitimacy of the central government. With senior military commanders and police officials traditionally chosen on the basis of political connections rather than competence, it is small wonder that the security forces suffer from poor morale and often demonstrate an unwillingness to engage the Taliban.

Afghanistan is far from unique in this regard. In a recently published book, I examined several cases where the United States attempted to support local governments in counterinsurgency and similar failings could be found in other countries too. Consequently, in successful assistance efforts, such as the Philippines in the 1950s, or arguably El Salvador in the 1980s, the United States had to give as much attention to modifying the behavior of its local partner as it did to countering the insurgents.

Yet, President Trump has explicitly rejected this approach, instead declaring that “we are a partner and a friend, but we will not dictate to the Afghan people how to live, or how to govern their own complex society.” In the absence of an Afghan government that has a viable strategy, effective military leadership, and the ability to win public support, more money and American advisors will not make a meaningful difference.

Even if the Trump administration recognized the need to press local partners for change, the task would not be an easy one. Maintaining power is frequently a competing priority for the local government, which may see rival elites or the nation’s armed forces as additional threats to their position. Consequently, many of the standard reform prescriptions favored by the United States—streamlining the military chain of command, ending patronage politics, engaging in economic reform, or embracing disaffected minority groups—could be as threatening to the besieged government as the insurgency itself.

It is tempting to think that merely providing significant amounts of aid will allow the United States to easily shape a local government’s behavior and policies. However, my research indicates that influence more often flows from pressure and tight conditions on aid rather than from boundless generosity. In particular, to maximize influence aid needs to be clearly linked to specific actions on the part of the local government and only dispensed when it implements a particular policy or achieves a specified goal. Such actions can also strengthen the hand of reform-minded officials in the local government vis-à-vis their domestic opponents.

Unfortunately, this approach to influencing client states runs contrary to U.S. doctrinal guidance as well as the instincts of most policymakers. American experience in Iraq demonstrates the limits of friendly persuasion. The Bush administration expected that its partner, Iraqi prime minister Nori al-Maliki, would embrace its strategy of overcoming the insurgency, in part, by bringing Kurds and Sunnis into the political process alongside the Shia majority. In contrast, Maliki prioritized bolstering his position among the Shia and turned a blind eye to violence against Sunnis. Maliki’s actions were undermining American efforts in Iraq, but the Bush administration never tried to compel him to change his ways. Instead, the Iraqi leader was provided with unconditioned aid and support to induce him to make better choices. This approach failed to restrain Maliki’s sectarian agenda, which prevented the military gains from the 2007 surge from being translated into positive political outcomes and laid the foundation for the rise of the Islamic State.

How should the United States approach the government of Afghanistan or any government it is attempting to assist in counterinsurgency with aid and advice in the future? Five principles flow from past experience:

First, attaching conditions to aid requires the ability to credibly threaten to withhold that aid in the absence of compliance. This, in turn, means that the American officials must avoid the sweeping proclamations of unconditional support for the local partner advocated by the famed 2006 U.S. counterinsurgency field manual.

Secondly, timing matters. If shaping the counterinsurgency behavior of a client state is a priority, then pressing it to make changes when it is weak is the way to succeed. The more directly the insurgents threaten a local partner, the greater its incentive to comply with U.S. strategy. Conversely, the local government has little reason to undertake reform when the situation is stable and it is assured of U.S. support.

Third, in a conditionality-based influence strategy, the conditions and their desired policy outcomes should be as unambiguous as possible, with easily measurable metrics and clear deadlines for compliance. Vague requirements that tie aid to demonstrations of “effort” or “progress” introduce a high degree of subjectivity into the process.

Fourth, even after an initial reform or policy change occurs, it may be necessary to maintain pressure on the client regime to ensure that it does not backslide.

Finally, in the context of a multilateral effort to support a client government, coordination is critical.  The presence of multiple donor countries in Afghanistan puts a premium on synchronizing U.S. policies with those of its allies, lest the local government attempt to subvert pressure by playing donor one off another.

These recommendations to condition aid to a friendly government in order to coerce it to reform may run counter to the instincts of many policymakers, but sometimes being a good ally means being a stern friend.

Walter C. Ladwig III is an Assistant Professor of International Relations at King’s College London and the author of The Forgotten Front: Patron-Client Relationships in Counterinsurgency.