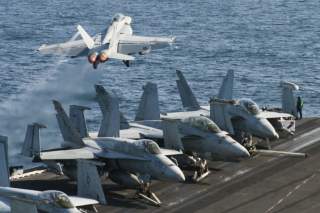 U.S. naval aviation is a combat arm in search of a strategic theory. Like other air forces, the U.S. Navy flying corps sprang into being with the invention of heavier-than-air warplanes. But while over a century has elapsed since then, no one has composed a treatise detailing how to use combat aircraft at sea. No one has explained how to integrate them into maritime campaigns aimed at wresting operational and strategic gain from adversaries in wartime, or discharging myriad noncombat functions in peacetime. Instead, naval aviators have improvised, experimenting with new technology and methods as they become feasible. While the experimental approach has sufficed thus far, efforts to correct the intellectual shortfall are decades overdue.

To a certain degree, this means starting afresh. Unlike its cousin, the U.S. Air Force, U.S. Navy aviation has no Giulio Douhet or Billy Mitchell. In other words, it has no founder who handed down writings to guide future generations. But why does that matter? you protest. U.S. Navy pilots and flight officers are the best of the best. Forebears of today's carrier airmen ruled the skies over places like Japan, Korea, and Vietnam. Why do the likes of Maverick and Goose need some pointy-headed poindexter to tell them how to do what they excel at doing?

Glad you asked. Let me count the reasons. One, to lift their gaze toward larger things. Battle is not an end in itself. Nor are counterpiracy, counterproliferation, or disaster relief noncombat endeavors to which aviators contribute in peacetime. To borrow from strategic guru Carl von Clausewitz, such functions are extensions of policy with the addition of martial means. Naval aviators are apt to do their jobs better, and render wiser counsel, if they grasp how such missions advance national purposes and power. Strategic theory supplies that all-embracing perspective.

Two, to provide a starting point to think. Clausewitz proclaims in effect that strategic fluency spares commanders and their political masters from reinventing the wheel whenever some new contingency with strategic import arises. Commonly understood concepts furnish a common frame of reference that helps commanders interpret the tactical and strategic setting, and decide how to execute missions in contested surroundings such as Asian or Middle Eastern skies. Naval aviators need such a vocabulary as much as their brethren trudging across the desert or plying the briny deep do. Flyboys need not improvise forever.

Three, to help decision makers debate weighty matters, and to sell their ideas to important audiences. Clausewitz affirms that "all great commanders have acted on instinct." Indeed, their greatness is built on tactical artistry. That's where aviators flourish. But skill in the cockpit doesn't exempt aviators from operational and strategic discourse. When "it is not a question of acting oneself but of persuading others in discussion," notes Clausewitz, "the need is for clear ideas and the ability to show their connection with each other." A mutual understanding of maritime air power would help airmen act as spokesmen vis-à-vis fellow officers, administration officials, lawmakers, and laymen. Clear communication is no small thing in turbulent times such as these.

And four, to hold up a mirror. As Chinese theorist Sun Tzu teaches, knowing oneself is half of any battle. Strategic theory helps a military service see and understand itself. Introspection is a useful thing. Historian David Alan Rosenberg considers the naval flying corps "both conservative and highly flexible." Rosenberg traces this curious outlook to naval aviation's formative years between the world wars. That's when aviation proponents such as Rear Admiral William Moffett, a battleship sailor turned chief of the Bureau of Aeronautics, fought off U.S. Army attempts to subsume naval air within a unified air service. Moffett then presided over a great divorce between sea- and land-based military aviation.

Bureaucratic politicking had consequences. Navy airmen remained naval officers first and foremost, constantly reminded that air power existed to supplement the fleet. Air power was not a stand-alone implement of war, as many land-based airmen insisted; it was the overhead component of sea power. Writes Rosenberg, "new technology and tactics were tested not within the protective walls of a separate branch" but during annual fleet maneuvers, exercises involving not just aircraft carriers but surface combatants and submarines. The navy was innovative in that it continually experimented with new methods of sea combat. It was conservative in that it abjured "written doctrine as a training tool, preferring that naval officers absorb the fundamentals of naval theory through the practice of their craft." Custom was king.

Over time, consequently, the officer corps came to share "a cohesive, almost mystical, understanding of the principles of sea power based on common experience and carefully preserved traditions." Concludes Rosenberg, "this type of unwritten dogma served the Navy very well" before and during World War II. But it was "difficult to define and even more difficult to communicate." It also tended to "hinder rapid adjustment to fundamental change." What worked well in naval aviation's early years—incremental experimentation—ended up erecting an impediment to innovation.

Nor did events force airmen to reconsider the interwar approach. Indeed, as RAND strategist Bernard Brodie observed after the war, "superb accomplishment in the greatest of all naval wars" appeared to ratify it. Naval aviation was unlikely to rethink its place in maritime strategy after seeing its methods vindicated in battle. So perhaps the dearth of philosophizing about seagoing air power is less shocking than it appears. It seemed unnecessary. But aren't airplanes airplanes, whether they operate from airfields ashore or flight decks at sea? Couldn't today's naval aviators simply purloin the air-power theories put forward by Douhet and Mitchell in the 1920s?

Doubtful. Early air-power scribes defined themselves in opposition to earthbound forces. In essence they believed military aviation had midwifed a novus ordo seclorum, a new order for the ages. The forefathers of air-power theory set out to justify independent air forces. Bureaucratic imperatives drove their advocacy. They wanted to liberate air power from armies and navies, maintaining that air forces could do it all in future conflicts. Or almost all: they allowed that surface forces might play some lesser part. Not only did the air force merit bureaucratic independence, then; this new method of war making transcended ground and sea forces. To this way of thinking, it was backward and foolish to subordinate air to sea or land power.

It would be hard for the U.S. Navy to import such ideas and attitudes so many decades after Moffett's great divorce. Longstanding differences of outlook may prove tough to surmount, even when the two airy navies share the same skies. Indeed, a culture clash could inhibit joint efforts within the Air-Sea Battle concept and other enterprises predicated on U.S. Navy/Air Force cohesion. Rather than concentrate solely on hardware, tactics, techniques, and procedures—workaday things on which tacticians prefer to concentrate—it would be worthwhile for airmen and officials from both services to confer about organizational culture. Let's not assume away the human dimension of joint air warfare.

Think about this on a basic level. Naval aviation, it seems, operates from inductive logic. Navy airmen look around themselves, determine what appears to work best in practice, and incorporate it into unwritten doctrine. They reason from observation. And their going-in assumption is that aviation is a subset of sea power, meant to support the fleet as well as project power onto foreign shores. That's a tactical worldview, by and large. Air Force airmen, by contrast, seem to work from top-down, deductive logic. They reason from precepts derived from works of air-power theory, putting those precepts into effect as best they may. That's a strategic worldview. And from a bureaucratic standpoint, they are obviously partisans of a free-standing air force—not the aerial wing of an army or navy.

That adds up to disparate reflexes vis-à-vis winged combat, and thence to interservice dissent. Tension between opposing worldviews could sow problems in debates over joint operations and tactics, keeping officers from the sister flying corps from seeing eye-to-eye. Now, it's important not to make too much of this disconnect. Strategic ideas are not foreign to naval airmen, while their land-based brethren are hardly airy-fairy dreamers out of touch with tactics and gee-whiz hardware. This is a difference in emphasis more than some radical disjuncture between institutional cultures. Still, such matters are worth exploring in joint forums. Better to discover points of contention beforehand than in the thick of aerial combat.

So if not Douhet and Mitchell, where should navy aviators look for inspiration? Well, if naval aviation is part of sea power, why not consult the classics of sea-power theory for the rudiments of a maritime air-power theory? Alfred Thayer Mahan instructs fleets to amass "overbearing power," sweeping enemy fleets from vital expanses or at most, allowing the enemy's flag to appear as "a fugitive." For Mahan, then, "command of the sea" is an absolute thing. Winning it enables a navy to blockade enemy coastlines, assail and defend merchant shipping, and so forth. Command of the air over and around the fleet clearly advances Mahanian command.