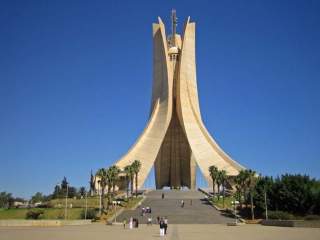 Voting in a wheelchair, unable to finish his victory speech, Algeria’s “new” President Abdelaziz Bouteflika is the embodiment of the regime’s decay. On April 17, the seventy-seven-year-old president was elected to a fourth term after a campaign in which he was depicted as the only solution for stability in a country still recovering from a decade-long civil war that killed an estimated 200,000 people. He is to be the leader of Africa’s second largest military apparatus as well as Africa’s largest producer of natural gas and second largest oil producer.

However, even with such military might and natural resources, the question remains as to whether Bouteflika's election will bring stability, as promised, or allow for gradually increasing discontent.

Memories of the civil war are still prevalent in the day-to-day life of the North African country, and Bouteflika’s campaign attempted to capitalize on them. Concerns over the potential reactivation of past conflicts are the regime’s best argument against a wave of protests denouncing the “deep state’s” corruption and failure to represent the people, referring to the unelected elite governing the country. The election results, however, demonstrate that such fears are eroding in light of day-to-day hardships. Indifference toward political feuds, highlighted by an unprecedented low turnout during elections, underscores just how much voters have lost confidence in their leaders.

For the first time since his initial victory during the 1999 elections, a lower number of people chose to vote for Bouteflika than those choosing to abstain. This broad disillusion is even more apparent amongst Algeria’s youth, which did not participate in the civil war. However, the multiple factions competing over power in the oil-rich country share the same common denominator—an absence of younger leaders and omnipresence of the “independence war generation”, which fought against the French colonial regime as well those who participated in the 1992 coup that started the civil war.

During a meeting in May 2012, the president himself acknowledged this open secret, stating that “[his] generation is over, 50 years after the independence, the Mujahideen’s [the Algerians who fought the war of independence] mission is over”. The president’s opinion, however, seems to have shifted dramatically after a stroke in 2013 led to his hospitalization in France. The stroke exacerbated tensions between the clans ruling Algeria’s regime. Moreover, it served as a wake-up call for the country’s elite, triggering realizations that little had been done to prepare for Bouteflika’s succession. As a result, Bouteflika’s reelection is seen as a temporary solution, allowing the elite to postpone the issue and prepare more thoroughly for a future changeover in leadership. However, even Algeria’s conservative regime realizes that it’s time for generational transition.

Yet there are certain issues that will not wait for political factions to finish their silent wars. More than one out of every five young Algerians are unemployed, particularly in regions where the energy industry, which accounts for 95 percent of Algeria’s exports, is making the country rich. While the regime might successfully use the civil war as a scarecrow against revolution, facts are stubborn. Every year, a significant portion of Algeria’s youth is leaving the country to search for opportunities elsewhere. The authorities have responded with “preemployment” programs comprised of temporary government jobs, yet these have further increased the population’s dependence on public assistance and only temporarily and artificially lowered unemployment. One million Algerians, mainly among the young generations, are participants in this program, allowing the leadership to purchase social peace at the expense of a better economic future.

Beyond that, the arrogance of an elite that counts on the youth’s disinterest in politics in order to consolidate its power, allows for disingenuous and overconfident rhetoric disconnected from the country’s situation. In one of his many sensational statements, Abdelmalek Sellal, Bouteflika’s then campaign manager and Algeria’s current premier, described the Arab Spring as a “mosquito that will be eliminated”. Such statements underline the elite’s detachment from the on-the-ground reality of the Algerian streets. They have not been as quiet as the regime would have liked.

Leading up to the elections, a timid yet notable wave of protests by opposition parties and a new pro-democracy group called Barakat (Enough) underscored the regime’s lack of credibility among a portion of the population. The first protests were met with disproportionate security deployments, arrests and police violence. Although they did not represent the kinds of mass protests witnessed in Egypt or Tunisia in 2011, they were, nonetheless, significant precisely because they happened despite the prevailing reluctance of Algerians to take to the streets.

The older generation may not have forgotten the atrocities of the civil war, but Algeria’s youth will not likely forget the humiliation of seeing their own president, struggling to speak or move, brought back from near death to protect the interests of a minority. This image, along with a spike in socio-economic frustration and discontent over the regime’s lack of transparency—according to Transparency International, Algeria ranks 97 out of 177—will remain a ticking time bomb for the old generation still in power.

Algeria’s policy of buying social peace is close to running its course. So is the argument emphasizing “stability”. Stability in Algeria means the same leaders running the same organizations of power (the army, the shadowy secret services, the aging ruling party, and the pro-government union). It also means that a country deemed to be a “strategic partner” for the security of America and Europe, will, nonetheless, remain unable to reform itself and learn from its own past. In short, it sounds a lot like stagnation.

Michael Horowitz is an intelligence analyst specializing in North Africa for Max-Security Solutions, a geopolitical risk-consulting firm based in the Middle East.