All Over but the Shouting: Engaging Brazil after the Elections 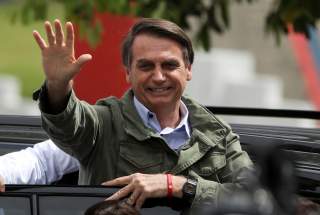 Elections have consequences, and Brazil’s elections on October 28, 2018, are particularly consequential. By an overwhelming margin, Brazilians elected Jair Bolsonaro, who is often described as a far-right, law and order populist, to lead Latin America’s largest democracy, now deeply polarized, through turbulent economic times. His resounding defeat of Fernando Haddad of the left-wing, deeply corrupt Workers Party (PT) gives a mandate to the president-elect and his vocal supporters to yank Brazil onto a different social path, while emphasizing a strong hand against corruption and a fierce attack on the overwhelming crime wave that has overtaken major urban areas.

The candidate appears to hold views that can charitably be described as anti-democratic. A former military officer and long-time if undistinguished legislator, Bolsonaro has mused publicly about the benefits of a return to dictatorship, spoken in favor of torture, and threatened the national Congress. Just prior to the election his son suggested it would be easy to close the Supreme Court. At a rally in the campaign’s final days, Bolsonaro said in reference to his Worker Party opposition, “We’re going to have a cleansing . . . and wipe these red thieves off the map. Either they leave the country, or they go to jail.” His greatest hits as a legislator include dedicating his vote to impeach a previous president to the jailer who tortured her. Among other morsels, he also claimed that a fellow legislator was too unattractive for rape.

While there is clearly a difference between campaigning and governing, the overheated, intemperate rhetoric cannot be easily ignored or discounted. In fact, much of it actually occurred before Bolsonaro was even an announced presidential candidate. There is a pattern of speech and behavior going back many years.

As a result, Washington’s engagement with Brasilia going forward could be fraught.

Initially, at least, the temptation will be to develop strong ties with the new administration. After all, Bolsonaro has said he wants to have close relations with the United States. After two years of strategic patience awaiting the end of the outgoing Temer administration, Washington would love to reboot relations from pragmatic to truly cooperative with Latin America’s largest nation.

And Bolsonaro has suggested foreign-policy priorities that in some way mirror U.S. interests. He wants to rethink Brazil’s relationship with top trade partner China, which was elevated to strategic in the BRICS context. This is significant to Washington and could have geostrategic implications, depending on the concrete nature of his actions. He promises to take a more assertive posture toward Venezuela, which is collapsing in real time on Brazil’s northern border with direct implications for Venezuela’s neighbors. He wants to open Brazil’s economy wider to other trade partners while re-working the commitment to regional trade grouping MERCOSUL, a trade partnership which locks in relations with Brazil’s traditional rival Argentina, and which one previous president called Brazil’s “destiny.”

He has also made noises about moving Brazil’s embassy in Israel from Tel Aviv to Jerusalem. He has expressed skepticism about climate change, a very significant development given Brazil’s critical position as the guardian of the Amazon.

Such actions would begin to unwind Brazil’s more traditional foreign-policy priorities, which have been jealously guarded from one administration to the next by the Ministry of Foreign Affairs, also known as Itamaraty. From Washington’s perspective, it could potentially be the first time in a generation where the United States and Brazil will be singing from the same hymn book in addressing issues of mutual interest.

Therein lies the dilemma. From a transactional perspective, deepening relations with the Bolsonaro administration may well serve a number of short-term policy goals, as defined by the Trump administration. But there is much more at stake. The core tenet of U.S. foreign policy in the Western Hemisphere since the end of dictatorships and authoritarian rulers at the end of the 1980s and early 1990s has been democratic transition and strengthening. Purposefully, the United States acts differently within the Americas than in other regions of the world. In the Americas, effective policy has been built on a bipartisan basis in support of democratic institutions and shared values. It’s an imperfect record to be sure, but it served as the driving vision for Washington’s regional interests.

Or at least it did. The pragmatic accommodation of populist leftist regimes from Venezuela to Argentina earlier this century caused the Bush administration to pull back on the full-throated support for regional democracy, even when governments, such as Venezuela, began to go seriously off track. It culminated in the Obama administration’s efforts to normalize relations with the Cuban dictatorship without Havana having done anything to democratize or to improve human rights. Washington’s muscle memory for regional democracy promotion has waned and the muscles themselves (e.g. the tools available to deploy) have atrophied. The Trump administration appears belatedly to be attempting to renew them, but, in the meantime, other actors such as China have aggressively entered the region. Without a broadly positive agenda underwritten by enhanced trade and economic relations, coupled with the soft power of democracy promotion enhanced by the power of example, Washington is re-learning Simon Bolivar’s dictum that democracy promotion in Latin America often seems like “plowing the sea.”

Now, Brazilians have elected as their next president someone who has shown undemocratic tendencies at best. Of course, Bolsonaro may well govern in a fully democratic manner, and if so the impulse will be to jump in the same canoe and row together toward the horizon, as distasteful as his previous rhetoric and actions have been. It’s the same scenario that faced the United States on the first election of Hugo Chavez in Venezuela. The United States will have to make hard choices. Brazil is not Venezuela, but the vigilance of the international community will nonetheless be required.

Our long-term interests demand a firm commitment to democracy and the Inter-American Democratic Charter that all nations in the Americas except Cuba signed in Lima, Peru, on September 11, 2001. Holding fast to those commitments, even at some short-term cost, will pay rich dividends for policy in the Americas, differentiating the United States, for example, from China’s overtly mercantile, transactional activities, and showing to skeptics that it really is about democratic principles first, not whether governments are left or right or pro- or anti-American.

It’s easy to resist those regimes that despise us. It’s more difficult—and more meaningful—to stand for democratic values to the extent they may be challenged by allies. As Brazilians celebrate yet another democratic transition in the Planalto Palace, this is the scenario that Brazil’s friends, including the United States, may soon have to face.