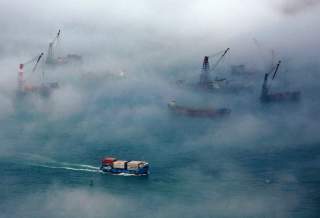 Since President Trump announced his intention to turn up the trade heat on China, the American political and chattering classes have all but declared Beijing the odds-on favorite to win any resulting trade conflict. Leaving aside this establishment’s dreadful prediction record that stretches back at least to the (completely unforeseen) collapse of the Soviet Union, and its clear determination to ridicule Trump’s flip comment about trade wars being easy to win, here’s what’s overlooked in its portrayal of China as ten feet tall in this arena, and rightly confident in its retaliatory capabilities.

First, the idea that China has much more to lose economically than the United States from an upward spiraling of trade barriers rests on much more than the simple fact of its huge bilateral trade surplus (just under $310 billion in 2016, the last year for which both goods and services data are available). For example, if China could so easily withstand a disruption of the economic status quo, then why has it used so many forms of trade predation for so long to maximize its exports and minimize its imports?

Would a country that could take or leave its trade surpluses work so hard to extort or steal its rivals’ intellectual property? Would it pursue industrial policies aimed precisely at creating advantages for so many designated key sectors of its economy over foreign competitors? Would it limit exports of critical commodities like rare earths (essential for electronics and information technology manufacturing) to give its own producers a leg up on rivals press non-Chinese companies to move operations to the PRC? Would it subsidize massive overcapacity in goods like steel and aluminum in order to undercut the competition globally? Would it place so many restrictions on foreign providers of farm products along with banking, insurance, telecommunications, Internet-related, audiovisual, express delivery, legal and other services? Would it sue its trade partners in the World Trade Organization simply because they’re exercising their right to bring actions against China? Would it remain so determined to keep foreign firms in the dark concerning the regulations concerning licensing and operating requirements; product, investment, and business expansion approvals; and business license renewals?

The long-time openness of America’s market—with sporadic, generally short-lived exceptions—has until now made obvious the U.S. government’s willingness to let the trade chips fall where they may. China’s pervasive, energetic, and ongoing interventions in trade and investment flows (as per the above list, which comes from an Obama administration report) makes obvious the high priority it still places on preserving lopsided trade flows—presumably because they provide economic benefits that are anything but expendable.

Second, one of these benefits has to do with achieving a goal that’s become imperative to the Chinese authorities—improving the quality of Chinese growth. As with America, too much of China’s economic expansion depends on ever higher levels of debt, rather than on more sustainable sources of demand. And Beijing at least sounds determined to rein in its unregulated shadow banking firms—particularly important lending culprits that have showered credit on provincial governments anxious to meet politically rewarding growth targets.

Yet if China succeeds, its overall growth would slow—possibly enough to threaten the regime’s hold on power, which depends heavily on continuing deliver the economic goods to the Chinese public. As a result, sustaining the much healthier growth represented by the widening of China’s global trade surpluses would become important than ever. Last year, fully 65 percent of that surplus was run with the United States. So even though such trade directly generated less than 5 percent of the PRC’s total economic growth in 2017, the surplus’ shrinkage would further reduce China’s narrowing margin for economic policy error.

In other words, strong—and healthier—growth is needed by China not simply for economic reasons. It’s also needed for political reasons. Hence a third disadvantage Beijing might face in a trade conflict: Far from conferring it with a decisive edge over a United States, with its fractious democracy and powerful individual constituencies, the dictatorial and thus intrinsically fragile nature of China’s government could well leave it with less room to maneuver. Such dynamics could even weaken China’s hand in agricultural trade, which is often seen as America’s weakest trade diplomacy link.

It’s true that Chinese retaliatory tariffs on U.S. farm exports could undermine President Trump’s support in the agriculture-heavy states that so strongly backed his White House bid. But likely blowbacks should be troubling Beijing, too. For example, however important the Chinese market for American soybean growers (it bought a third of total U.S. output last year), these exports are vital in helping contain food price inflation in China, since these crops are widely used to feed the livestock that satisfy the country’s soaring appetite for beef and pork. As China’s leaders surely remember, rising food prices inflamed public opinion in the months before 1989’s Tiananmen Square protests.

A repeat could represent a much bigger downside for Chinese politicians than any rural backlash pro-tariff American politicians might face. With year-on-year food inflation topping 4 percent in February (even though pork prices plummeted), that could be why soybeans aren’t (yet) on the list of American products China recently listed as candidates for trade retaliation.

Moreover, even this list of impressive American trade-war cards assumes that Washington will secure absolutely no cooperation from other major economies that have also been victimized by China’s predation, and that even close security allies will bolster Beijing’s position by eagerly replacing U.S. goods ranging from farm products to aircraft in the Chinese market.

These trade powers do have long histories of cutting separate deals with China. But the prospect that they, too, could face Trump tariffs might produce strong incentives to line up more closely with the United States—as may be already apparent with South Korea. Over the weekend, Seoul and Washington announced an agreement in principle on revising a bilateral trade deal that includes a South Korean commitment to cut steel exports to the United States. Of course, unless the South Koreans stem their own steel imports from China, their steelmakers will suffer. And the Trump administration’s decision to exempt certain countries from U.S. steel and aluminum tariffs temporarily likely includes similar terms.

Why, then, is there widespread American belief in China’s superior trade-war chances? In large measure, because so many of the analysts who have dominated the U.S.-China trade debate for so long work for think tanks funded by companies and foreign governments that have profited handsomely from the bilateral and global-trade status quo. And in large measure, because for so long Democratic and Republican administrations and sessions of Congress beholden to the same interests have refused to use America’s leverage.

The defeatism filling the American media show that the the Washington Blob-ers it keeps showcasing remain as compromised as ever. But although a trade conflict with China may not be an easy win for the United States, for the first time in decades, it has a president who realizes that it is eminently winnable.