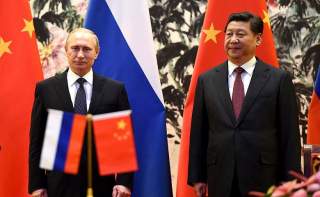 THE WORLD today is quite different from the one of thirty years ago, when The National Interest published its first issue. Since then, immensely important changes, both at home and abroad, have taken place that continue to confound American political elites.

Among the most significant was the peaceful collapse of the Soviet Union, a state which TNI’s founding editors described as “the single greatest threat to America’s interests,” saying it would “continue to [be] so for the foreseeable future.” Yet the USSR ceased to exist in 1991, just six years after the magazine’s start.

This is certainly not a reflection on The National Interest’s founding editors, Owen Harries and Robert Tucker, both of whom set a very high bar indeed for their successors. No one, including inside the Soviet Union itself, anticipated how and when it would fall—to use Ronald Reagan’s language—into the ash heap of history. Conventional wisdom on both the left and right was that the Soviet Union would remain a viable enterprise.

Despite the disintegration of America’s long-term superpower rival, more than two decades later the world remains perilous and unpredictable. In fact, in some ways today’s international environment is even more threatening than that of the late Cold War period—to begin with, Mikhail Gorbachev is not governing Russia. Or China, for that matter. At the same time, Europe is once again a theater for military confrontation, and the crisis in Ukraine is driving an emotionally charged rivalry over a country where Moscow sees threats to its essential interests.

More importantly, thirty years ago, both sides were prepared to live with the geopolitical status quo even if neither was fully satisfied with it. Contrary to conventional wisdom at the time, the Soviet Union had already passed its prime by 1985 and was increasingly on the defensive internationally. On the American side, notwithstanding then president Ronald Reagan’s rhetoric, Washington was not aggressively promoting regime change in the USSR.

Today, while there is legitimate debate about how far President Vladimir Putin is prepared to go in increasing Moscow’s influence in the post-Soviet space and the world arena, he and his associates regularly acknowledge their revisionist aspirations. While the Obama administration denies any intent to promote regime change in Russia, Putin and his colleagues have strong suspicions to the contrary. Indeed, he and many other leaders outside the West argue that by seeking to promote their values worldwide, the United States and its allies are themselves the revisionists and threaten both their nations’ interests and their legitimacy.

For its part, China, preoccupied primarily with stability, domestic reform and economic growth, was not yet a major geopolitical presence. That has changed. Today, Beijing is steadily expanding its military capabilities, regional assertiveness and geopolitical reach in ways both large and small that increasingly challenge the U.S.-led international order. Despite domestic and international setbacks, China is already the economic superpower that the Soviet Union never was. Great forces of history are working at cross-purposes on the Eurasian landmass.

The same holds true in the Middle East. Thirty years ago, Iraq and Iran, two of the region’s leading military powers, were locked in a deadly war that would end in a stalemate. Today, as the result of America’s imprudent military intervention, Iraq, now heavily influenced by Tehran, is battling the suicidal extremists of the Islamic State; Iran itself has emerged as a growing power and nuclear threshold state.

NEVERTHELESS, WHILE the international political and economic environments are vastly different today than when The National Interest first appeared, the fundamental objective of the magazine, defined by the original editors, remains appropriate. As the editors explained, “We find ourselves without a clear set of governing assumptions about foreign policy....There is much debate and uncertainty as we struggle to arrive at one.” As the editors saw it, “A principal aim of The National Interest [was] to stimulate and focus this discussion.”

Much remains to be done. The quality of America’s foreign-policy discussion has demonstrably deteriorated over the last thirty years. Debates are occurring, but serious conversation is far too often limited to experts inside and outside government who lack real political influence. The transmission belts to convey their analysis and insights to the public and to decision makers in the executive and legislative branches are weak and often ineffective. The result is that the debate over international affairs is now badly debased, particularly in Congress. The media, meanwhile, lacks the interest and the expertise (particularly in the digital space) to present vital issues to the American people. At the same time, despite a number of national-security setbacks—including in Iraq, Afghanistan and Libya—voters appear ready to delegate authority to political elites with few questions or constraints, perhaps because ordinary Americans see no direct negative impacts on their daily lives.

With victory in the Cold War and absent a rival superpower to limit and shape U.S. choices, America’s new foreign-policy establishment has adopted a simplistic, moralistic and triumphalist mind-set: foreign policy by bumper sticker. This mind-set abandons traditional foreign-policy analysis, which emphasizes establishing a hierarchy of priorities, making difficult decisions over trade-offs and considering the unintended consequences of U.S. actions. It also ignores the fact that America’s political system has consistently failed to sustain costly international interventions when vital national interests are not at stake. Prominent voices dismiss those raising such concerns as cynical realists, isolationists or, more recently, unpatriotic Putin apologists. Many tacitly accept this form of intimidation by interventionists who substitute chest-thumping for coherent and serious, historically grounded arguments.

In fairness, many officials in the Obama administration, as well as former officials in the George W. Bush administration, are well-informed, serious and (most importantly) results-oriented foreign-policy realists. The trouble is that, particularly at the senior level, officials face considerable pressure to judge U.S. policy options by their intentions, their appearances and their suitability for simple slogans rather than lasting results. Conversely, they have little need or opportunity to develop long-term strategies that place regional events into the context of fundamental U.S. interests.

As a practical matter, it is difficult to recall a nominee for any high-level national-security position who has failed to win Senate confirmation, or even encountered significant criticism, for advocating or implementing ill-fated interventions. In contrast, many nominees have endured withering criticism for purportedly “soft” stances on exercising American global leadership by force. An example of this was the confirmation hearings for Chuck Hagel as secretary of defense before the Senate Armed Services Committee in 2013. The hearings quickly devolved into a nearly Joseph McCarthy–like circus when Hagel’s earlier questioning of the Bush administration’s “surge” in Iraq was attacked as wrong-headed and unpatriotic. Equally damaging, the profound congressional foreign-policy debates of the Cold War era have given way to occasional skirmishes over important but strategically secondary issues like whether or not former secretary of state Hillary Clinton provided proper security for the U.S. diplomatic compound in Benghazi.

Members of Congress generally ignore more fundamental questions, such as why the United States decided to overthrow a nasty tyrant like Muammar el-Qaddafi, who did not particularly threaten the United States, without even thinking about the likely aftermath of his ouster. Congress no longer seems to convene serious hearings on big issues in America’s relationship with Russia, the only country with the military capability to destroy the United States, or managing China’s rise as a global superpower, perhaps the central challenge confronting the United States in the twenty-first century. Hearings that do take place typically degenerate into partisan posturing over peripheral matters.

The underlying problem is that selecting witnesses (or, for that matter, television experts) who are willing both to speak their minds and to offer objective analysis has become increasingly difficult. Fox News has its experts and MSNBC theirs, but never the twain shall meet. One might expect that the explosion in the number of foreign-policy think tanks, advocacy groups and nongovernmental organizations would produce a rich diversity of views, but it has instead fueled groupthink and competition to be, or appear to be, close to one political power center or another.

Moreover, think tanks are increasingly functioning as a revolving door for ambitious men and women who have just left government or are seeking to enter it. While practical policy experience is profoundly important, many of these putative scholars think about their future confirmation hearings at least as much as they think about the facts they are meant to assess. Like it or not, they also recognize that if they fail to subscribe to and repeat prevailing views, they will not be taken seriously and will be perceived as eccentric, unreliable voices in the wilderness.

On top of this, media coverage of world affairs has declined considerably in the post–Cold War period. American television networks and print media have far fewer foreign bureaus and reporters. Further, news programs rely heavily upon former officials and senior military officers, who generally do not express contrarian opinions, and their own nonexpert reporters. Public television has a couple of shows that allow more time for serious conversation and feature a broader spectrum of guests, but even there, guests face pressure to conform to prevailing narratives.