America’s Foreign Legions: How We Treat Our Proxies Defines Us 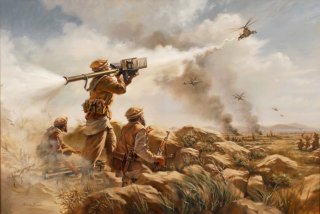 PERHAPS NO image better represents America’s many small wars since the end of World War II than that of a Central Intelligence Agency (CIA) officer on the roof of the U.S. embassy, back bent and arms extended, assisting waiting Americans into a UH-1 Huey helicopter. In that one frame, the photographer captured the final outcome of almost two decades of American involvement in Vietnam. Paired with images of aircraft shoved from the deck of an American warship into the South China Sea, one senses the essence of a hurried exit amid chaos engendered by wretched excess. However, that photograph snapped almost half a century ago embodies more than a single event in a single war. It is a snapshot of a string of American failures involving partisans, partners, and proxies who fought at our side or on our behalf, perhaps believing more in us and in our professed values than we have ourselves. In the intervening decades since that signal moment in the South China Sea, and really since 1945, America has engaged in a string of small wars and some that outgrew the title. Consistently, our wars requiring more than pure mass and unrestrained force have resulted in outcomes ranging from failure to inconclusiveness. The only consistent aspect is our continued inability to retain critical lessons repeatedly learned, each time preferring instead to pretend they never occurred.

As of a 2018 RAND Corporation study, deployments representing the broad geographical reach of American intervention since September 11, 2001, at least 2.77 million Americans have seen combat in Afghanistan, Iraq, Syria, the Sahel and Horn of Africa, and the Philippines. Yet in 2021, the average American seemingly has only a passing understanding of the realities of warfare or the American way of war. It is an understanding seemingly more informed by World War II movies and YouTube videos than reality. Perhaps this condition is unsurprising. Only 1 percent of 330 million Americans have served in the post-9/11 wars, while 11 percent of 140 million Americans fought in World War II. But World War II was a made for Hollywood anomaly; a perfect war for what would become America’s drive-through, disposable culture. The “Good War” was four years of all-out effort driving towards clear end zones in Berlin and Tokyo Bay and spiking the ball with the utter capitulation of two quondam great powers. On the heels of World War II came Korea; reasonably quick, never understood, and quickly forgotten as a tie coming on the heels of a championship season. Whether battles or Big Macs, Americans like results now, fresh and hot and served our way. However, the anomaly of World War II notwithstanding, international competition is not a drive-through and what we want is not what we get. It hasn’t been for seventy-five years.

The American way of war is not resolute sailors coursing across blue oceans, silk-scarved Mustang pilots spiraling through European skies, or artfully smudged GIs and Marines bloodlessly assaulting bunkers. Rather, the real and present history of American warfare is one of outsourcing; of volatile marriages of convenience between the United States and its partisans, partners, and proxies. Like all relationships, they come with mixed expectations and varied intentions. Adherents to realpolitik may argue these relationships are bound only by the interests of the parties, each using the other in the pursuit of goals that may or may not be common or parallel. But like any high-stakes relationship, there is more than cold practicality at play, and the inevitable breakups leave very real lives and nations in ruin.

Having stood alongside our partners, having seen the venality and opportunism as well as the soul-shattering faith they have in America as an ideal, as that shining city on a hill, we must ask ourselves what our national morality demands of us where our partner nations are concerned. In effect, is it proper that our partners in the enterprise of war have more faith in American values than we might, that they believe in us more than we believe in ourselves? Unfortunately, in these arrangements America has not always acquitted itself well, often preferring to leave the green stuff on the nightstand and slip down the fire escape.

AFTER ALMOST a decade and a half spent propping up a series of South Vietnamese governments riddled with corruption, whose control over a culturally balkanized agrarian society largely stopped at the gates of Saigon, the American exit from Vietnam saw the disorganized retreat and ultimate capture of thousands of South Vietnamese forces. Having served a government the United States subsidized until it became no longer politically feasible, thousands were imprisoned in communist “re-education camps.” Countless others fled to uncertain futures outside the borders of Vietnam. Amongst millions of civilians caught in the middle, the mass exodus by boat of approximately 1.2 million Vietnamese saw on the order of 800,000 safely reach another country’s shores. According to the UN High Commissioner for Refugees, between 200,00 and 400,000 Vietnamese, so-called “boat people,” died at sea.

The outcome for regular Vietnamese forces, though tragic, may arguably represent the final table stakes in today’s state vs. state competition. But what of the other forces; those irregulars that more directly served U.S. ends, those who fought directly with, and for, the U.S. military or the CIA?

When the first U.S. Army Special Forces soldiers arrived in Vietnam in the early 1960s, they immediately recognized that the war was about more than the North/South schism created at a Geneva conference table in 1954. Trained in revolutionary warfare and thus quick to spot a dissatisfied minority, the Special Forces soldiers and their CIA paramilitary counterparts recognized the various mountain-dwelling Montagnard tribes as a third party in the conflict. There was little love lost between the lowland Vietnamese and the Montagnards, whom the Vietnamese referred to as moi, or “savages.” The Montagnards spread across southern China, Laos, and Vietnam are ethnically distinct from the Vietnamese. They are largely subsistence farmers, with a distinct set of languages, a separate religion, and a belief that the Vietnamese had denied them land promised by the French. Attracted to their loyalty, bravery, and stoic acceptance of hardship, CIA officers and Special Forces soldiers formed relationships with them that carved a martial history replete with tales of the “Happy Warriors.”

Nonetheless, after fifteen years, America withdrew from the field in Vietnam. The departure left a generation of Montagnards who spent their adulthood fighting alongside their American partners to fend for themselves between North and South Vietnam—two nations that agreed only that the Montagnards were lesser humans. Suddenly alone, they had little voice amongst the South Vietnamese and by 1975 were willing, but unable, to resist the North Vietnamese onslaught.

As South Vietnam’s government and army collapsed, many Montagnards fled to neighboring Cambodia where they faced equally savage treatment at the hands of the Khmer Rouge. Others, who remained in Vietnam, held hope that America would come to their aid. One story details a former Special Forces soldier turned USAID worker escorting two thousand Montagnards to a beach in Nha Trang where they waited for an American rescue that never came. Over decades, a precious few of the total were resettled in Montana by the CIA or assisted to North Carolina by their former compatriots in Special Forces. Those who remained titularly free were, and remain, subject to oppressive restrictions under the communist government. In 2018, Radio Free Asia quoted an ethnic Montagnard spokesman Neil Nay, “The present-day government of Vietnam imposes severe restrictions on the ability of members of its Montagnard indigenous peoples to exercise their cultural rights, to use their native languages, to obtain an education, and to secure reasonable employment opportunities.”

Likewise, the Nungs who fought with the CIA and Special Forces were fiercely loyal fighters. Ethnically Chinese, the Nung moved south to avoid living under communism and were hired by CIA and Special Forces for their loyalty and resolve. They were critical to the defense of Camp Nam Dong, in which Special Forces advisors and indigenous troops held off North Vietnamese forces attacking with a three to one advantage. The camp’s commander, Captain Roger Donlon, received the first Congressional Medal of Honor in Vietnam for the action and gave particular credit to the Nung security company. That extraordinary performance was not uncharacteristic according to Dan Southerland of Radio Free Asia. One Nung, Vay Nheo Nam,

…signed on with the Special Forces in 1966 when he was only 14 and served until 1972, taking part in numerous reconnaissance patrols. He fled Vietnam in 1991 with his son, daughter-in-law and three grandchildren after the government arrested his wife and interrogated her for two weeks.

…was among about 30 Nung captured in 1966 while defending a landing zone so Americans could be evacuated by helicopter after a Special Forces camp at A Shau was overrun. More than half the defenders were wounded, and all the wounded died in captivity, a U.S. official said. Cuong was one of only 12 who survived, and he rejoined the Green Berets after his release in late 1967.