America’s Interest in Ukraine Is Not What You Think 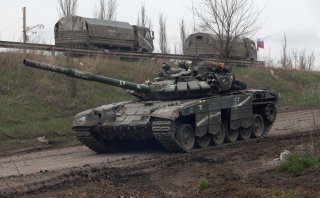 The United States’ primary security interest in Ukraine is a stable relationship with Russia, but you would not know it based on U.S. foreign policy. As John Mearsheimer has argued, the United States has pursued a revisionist policy “to make Ukraine a Western bulwark on Russia’s border.” This strategy, which included vague promises of eventual NATO membership, was pursued with naïve disregard for Russia’s security concerns and the likely effect on the U.S.-Russia relationship.

As early as 2000, power transition theorists argued that “Russia matters because of the potential power of a Russian-Chinese alliance.” Just as Russia ought to have been viewed in light of the anticipated security competition with China, Ukraine ought to have been viewed in terms of the realpolitik need to keep Russia onside. Instead, motivated by liberal ideology and mistaken assumptions tracing back to the end of the Cold War, the United States viewed Ukraine (and Georgia) as the logical next target for inclusion in its democratic alliance system. If history was over, then such a policy was logical. Ukraine’s inclusion in key Western institutions was simply part of a process whereby China, the Middle East, and Russia itself would eventually join the United States in a universal democratic peace.

This faulty vision, derived from learning the wrong lessons of U.S. victory in the Cold War, is responsible for errant U.S. policy in Ukraine. It is responsible for the idea that because democracy was on the march and because democracies tend not to fight one another, “support for democracy [was] to be our guide in the … world,” as David Lake summarized the widely held view in 1994. The successful expansion of NATO in 1999 and 2004, as well as waves of EU enlargement, reinforced this view. But Russia’s invasion of Georgia following NATO promises of future Georgian and Ukrainian membership at the alliance’s 2008 summit in Bucharest should have been a blinking red light that spheres of interest still mattered. Instead, the United States chose to ignore this warning. Its ideological blinders would not allow it to consider that great power politics remained alive and well.

This ideological misunderstanding of the U.S. national interest has influenced the U.S. pursuit of a revisionist and interventionist approach across the globe for three decades, with catastrophic consequences in Iraq and now Ukraine. At Stephen Walt points out, “the liberal ideologues who dismissed Russia’s repeated protests and warnings and continued to press a revisionist program in Europe with scant regard for the consequences” deserve a healthy share of blame. Had the United States understood its interests in Ukraine from the perspective of U.S-Russia (and, ultimately, U.S.-China) relations (a perspective Joe Biden himself shared regarding NATO expansion in 1997) rather than democracy expansion, this crisis and humanitarian tragedy could have been avoided.

Rather than bring about a more stable, secure, and prosperous world, U.S. revisionist policy inspired by liberal ideology has had the opposite effect. The Middle East is engulfed in perennial chaos, the Taliban once again rule Afghanistan, and a hostile Iran continues to wield great influence in Iraq. More significantly, every year China’s economy grows faster than the American economy is a year in which U.S. relative power further declines. As Graham Allison illustrates, on many key measures of power China has already surpassed the United States. This is why the 2021 U.S. Office of the Director of National Intelligence Annual Threat Assessment listed China as the United States’ number one threat, the second consecutive administration to hold such a view. This view of China as the biggest threat to U.S. interests is uniquely bipartisan.

Because economics and demographics are the primary sources of power, prescient analysts foresaw the threat from China as early as the 1990s, even as scholars like John Ikenberry were focused on “strengthen[ing], deepen[ing], and codify[ing] the liberal political order.” In 2000, power transition scholars argued that “plans for limited NATO expansion ignore the biggest future security problem for the West,” namely China. They accurately understood that the “need to prevent any … [Sino-Russian] alignment should be central to all thinking about the future of NATO.” It was “naive,” these scholars argued, to assume NATO expansion would not ultimately push Russia into China’s arms. Yet NATO did expand, and Sino-Russian alignment is precisely what has occurred.

This is a strategic error of massive consequence. Russian foreign minister Sergey Lavrov is not wrong when he suggests the war in Ukraine poses a question to “the legal world order.” Indeed, Fareed Zakaria has officially declared that we are now living in a “post-American” global order. Given the so-called economic law of uneven growth articulated by scholars like Robert Gilpin, such a new reality may have been inevitable. But the United States has accelerated this shift by expanding rather than contracting its global commitments even as its relative power basis has declined. The United States has been talking loudly while carrying a shrinking stick.

The war in Ukraine gives the lie to liberal internationalists such as Robert Kagan who argue that “maintaining the liberal world order” is simply a matter of resolve. Quite the opposite. What Kagan calls “constant [order] tending” is actually clinging to a strategic lifestyle the United States can no longer afford. If American foreign commitments continue to exceed American power, the inevitable result will be additional crises and accelerated decline. Rather than expanding our commitments in places like Ukraine (and Taiwan, for that matter), the United States should begin strategically unwinding commitments it no longer has the capacity to uphold. As Paul MacDonald and Joseph Parent point out, “sagging capabilities and a sprawling defensive perimeter will court disaster.”

Unfortunately, the disaster has already arrived. The United States should, therefore, work to limit the scale of the catastrophe by supporting peace talks between Ukraine and Russia. The U.S. interest is in a sovereign, neutral Ukraine with clear red lines mutually understood and agreed to by Russia, Ukraine, and the United States. Such an agreement might involve an open door to eventual EU membership even as NATO is definitively taken off the table. If such a deal can be reached and the United States finally abandons its ideologically driven foreign policy and instead pursues a foreign policy of restraint, perhaps this tragedy will not have been completely in vain.

Brendan Flynn has been studying for his Ph.D. at Wayne State University since 2020, where he concentrates on international relations with a focus on China and Asian security. From 2015 - 2016, Brendan studied Chinese in Beijing, before researching Asian maritime disputes as an intern at the Center for Strategic and International Studies (CSIS) in Washington, DC. He currently lectures on international relations at Oakland University in Rochester, Michigan. This essay was a runner-up in the 2022 John Quincy Adams Society/The National Interest Student Foreign Policy Essay Contest.