Is This America’s Mussolini Moment? 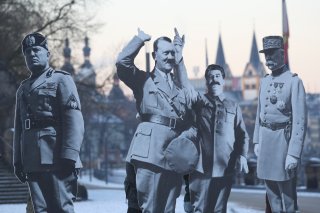 NAPLES, Italy—At a massive fascist rally on October 24, 1922, a black-shirted Benito Mussolini promised to drain the swamp of the political establishment and restore Italy’s greatness on the world stage. “We shall strangle the old Italian political class,” he told the crowd. They responded by shouting, “Rome, Rome!” Four days later, more than 30,000 squadristi—the fascist squads committed to political violence—marched on the capital.

Thus, a hundred years ago—more than a decade before Adolf Hitler’s Nazi Party took over Germany—the first fascist regime was established in the cradle of European civilization. Adored by millions, Mussolini would boast that he had buried “the putrid corpse of liberty.” Biographer Paolo Monelli likened the Italian people’s embrace of “Il Duce” to that of opera stars: “As one does with tenors, they enjoyed his good long notes and the melody without paying any attention to the words, but, if they had listened more carefully, they would not have been surprised by the catastrophe later. He had announced it.”

The same might be said of Donald Trump, whose refusal to accept the 2020 presidential election results looks to many like an assault on liberal democracy. There are various reasons for the resilience of Trumpism, but the most important reason—fear and loathing of the political alternatives—demands our attention. It is what swept Mussolini and the fascists into power.

Italy was on the winning side of World War I, and its postwar economy was not as desperate as that of Germany. Yet its domestic situation was ready to be exploited. War veterans returned to a moribund economy; strikes and civil unrest had become the norm. The sense of disillusionment—650,000 Italian soldiers killed with little to show for it—deepened national divisions. Add to that the 1918 influenza virus, which killed about 466,000 Italians and contributed to a national malaise.

Enter Mussolini, who cast himself as the only man who could shake up the system, rebuild the economy, and end the “paralysis” and “parasitic incrustation” of the Italian state. Like today’s cynics of America’s electoral system, Mussolini derided Italy’s parliament as “the people’s toy,” ripe for a revolution. “What do we want, Fascists?” he asked the crowd. “We have answered quite simply: the dissolution of the present Chamber, electoral reform, and elections within a short time from now.”

King Victor Emmanuel invited Mussolini to become prime minister not because of his political aims, but because of the possibility of a complete breakdown in the rule of law. The growth of communism in Italy—which terrified much of the population—had a lot to do with it.

In the aftermath of the war, local Soviets, districts under communist control, were spreading rapidly. Strikes and riots were breaking out all over the country. Fascist mobs, armed with knives and pistols, clashed with communists, socialists, and their sympathizers. Fascist candidates for the Chamber of Deputies in the elections of October 1919 received only 4,000 votes; their socialist opponents received forty times as many. Mussolini, derided as a political corpse, rebranded himself.

The former socialist and editor of the left-wing Avanti declared himself the only force capable of rescuing Italy from Marxism-Leninism. Mussolini crafted an image as a champion of the poor, of war veterans, and of social justice. Perhaps most importantly, he developed a style of oratory—colorful, blunt, bombastic—that made him a captivating speaker, regardless of his disregard for facts and logic. Luigi Barzini, who covered Mussolini’s rallies as a journalist, said he possessed “an instinctive ability to ride the emotional wave of the day, whatever it was, to know what people wanted to be told, and by what low collective passions they would more easily be swept away.”

The government’s failure to maintain law and order seemed to confirm the claim that Bolshevism could only be stopped by “salutary violence.” Fearful of the militant atheism of the communists, many Catholics supported Mussolini, who spoke respectfully of the church and the “spiritual values” of the Italian people. Like no other political party, the fascists appeared to be “on the side of freedom against tyranny,” writes Christopher Hibbett in Mussolini: The Rise and Fall of Il Duce. “And so the virus of Fascism was allowed to spread.”

Trump and his conservative supporters are often accused of taking a page from the fascist playbook. Under this view, the January 6 insurrection was a botched version of the March on Rome. History will render its judgment of Trumpism. Yet one lesson from Italy’s fascist past must not be missed: The radical, utopian schemes of the political Left fueled a cultural backlash. The communist contempt for capitalism, private property, traditional values, patriotism, Italy’s cultural inheritance—it all made Mussolini’s political vision plausible, even attractive.

“Let it be known,” he declared shortly after seizing power, “that Fascism knows no idols and is no worshipper of fetishes. It has already trampled, and if necessary, will trample again, over the decaying body of the goddess liberty.”

In truth, Mussolini, along with Marx and Lenin, inaugurated the idolization of politics. Hence, the totalitarianism disease—the submission of the individual to an omnicompetent state embodied in a cult of personality—was unleashed. Although fascism is associated with the political Right, its mental outlook can just as easily be found among the political Left. And, as we’ve seen, politically motivated violence defies simple partisan labels.

Whatever the ultimate fate of Trumpism, America’s Mussolini moment is far from over.

Joseph Loconte is a distinguished visiting professor at Grove City College and a senior fellow at the Institute on Religion and Democracy. He is the author of God, Locke, and Liberty: The Struggle for Religious Freedom in the West.