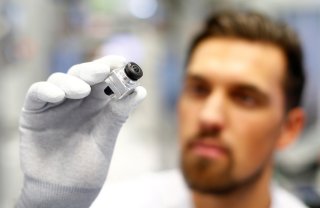 During the Iran-Iraq war of the 1980s, the belligerents attacked neutral shipping in the Persian Gulf, putting the free world’s oil supply at risk.  The Cold War was still very cold, and the United States and its allies were reliant on Persian Gulf oil to drive their economies and militaries.

To safeguard the supply of this strategic resource, Washington initiated Operation Earnest Will on July 24, 1987. It was, and remains, the largest maritime convoy operation since World War II. The cost to the Navy was thirty-seven sailors killed, more than thirty injured and two warships severely damaged.

Today the United States relies on other foreign-sourced strategic materials that will have to be secured in times of crisis or conflict. It is a risk that has been acknowledged by both political parties and reaffirmed by a presidential executive order, also known as the Executive Order on America’s Supply Chains on the thirty-sixth day of the Biden administration. As such, the Navy can be expected to execute one of its traditional roles—safeguarding the nation’s maritime trade. The question is what essential materials will need to be secured, and where will the Navy be required to operate in order to secure them?

Alfred Thayer Mahan’s 1890 seminal work The Influence of Sea Power Upon History remains relevant in today’s age of global supply chains, distributed manufacturing, and instantaneous global communications via undersea cables. A central lesson of this book comes from Mahan’s account of the Dutch war with England in 1653–54. Blockaded by the British, the Dutch Republic’s maritime commerce was choked off. Its Navy was unable to gain the timber it needed to build and sustain it, leaving the country powerless to break the blockade. Driven by such historical lessons, the British initiated the Suez Crisis in 1956 in an attempt to secure access to oil supplies in the Persian Gulf, and the United States fought the 1990–91 Gulf War at a time it imported over half its oil from the region.

Until fairly recently, the United States has not had to worry about its overseas trade being held at risk, save from Somali pirates, Al Qaeda terrorists, or renegade Houthis. Needless to say, such threats posed no real threat to the viability of our international trade lines.

In recent years, however, more serious threats have emerged. Iran seems engaged in an undeclared assault on shipping in the Persian Gulf.  While China has embarked on a years-long effort building military installations and fortifying garrisons astride critical shipping lanes in the disputed South China Sea. Yet, it took China’s 2010 embargo of rare earth exports to Japan during an East China Sea crisis to stoke serious concern about securing United States access to strategic materials critical to national defense. Most notably was the 2013 creation of the Industrial Base Analysis and Sustainment (IBAS) program intended to ensure adequate defense supplies.

The United States government has since produced several reports reflecting a growing awareness of the nation’s susceptibility to coercion through the suppression of trade in strategic materials. These include Executive Order 13806 (July 2017), a 2018 interagency task force report and a January 2021 Defense Department’s Industrial Policy Report to Congress (January 2021). Focusing on a shortlist of five strategic materials, a picture begins to form regarding important trade relationships and vulnerabilities regarding the Navy.

The following five materials were chosen because of their impact on the Navy’s supply chain, difficulty in on-shoring production, and reliance on overseas sources: microprocessors (i.e. microelectronic logic circuits), precision machine tools, tungsten (i.e. electron tubes), titanium, and high-performance aluminum. This is not an exhaustive list to be sure, and consideration was given to LCD and OLED displays used across naval platforms and aircraft, as well as rare earth elements (i.e. neodymium-iron boron permanent magnets). However, in both cases, a combination of domestic on-shoring production and sourcing matched with Congressional attention mitigates adding these to the list now. For a deeper look into strategic resource market fragility and criticality, and the tools being used to secure defense supply chains look for Maiya Clark’s forthcoming research. That said, the current National Defense Stockpile of rare earths, some fourteen thousand tons, must be reassessed against the demands of sustaining a prolonged conflict.

The first is microelectronics which are pervasive. They make our daily routines possible; they keep the economy humming, and they allow our military to operate in the field.  Failure to manage the supply of these critical components can bring an entire industry to a standstill—as is playing out today in the auto industry.

The coronavirus has slowed the production of microelectronics by their regular suppliers, leaving Volkswagen and Ford scrambling to find new sources for these indispensable components. It is not going well. Production of popular vehicles like the Ford F-150 has slowed dramatically. Overall, 672,000 fewer vehicles will be produced globally in the first quarter of 2021.

It would cost $10-30 billion to expand or on-shore production of microelectronics to meet domestic demand—and it would take years to accomplish. Obviously, that is too expensive and slow to enable a prompt coronavirus recovery and certainly not adequate during wartime. In the meantime, the nation and the Navy overwhelmingly (more than 80 percent) source microelectronics from East Asia—Korea, Taiwan, China and Japan, in descending order.

The third is tungsten, which the Navy uses as a critical component in its communications and radar systems. According to a 2021 United States Geological Survey report, China dominates the global trade and tungsten production, controlling over 80 percent of the market. While the United States does have significant tungsten deposits, it has not mined it commercially since 2015. Instead, it relies on six domestic companies to reprocess scrap and use chemical processes to convert concentrates. This does not produce nearly enough to meet needs. Aside from China, current imports are sourced from Bolivia, Germany and Spain.

The fourth, titanium is an important element in aircraft construction and marine hardware due to its corrosion resistance and strength.

In 2019 the United States sourced 86 percent of its titanium needs overseas, principally from Japan, Kazakhstan and Ukraine. Domestic production is limited today to a mine in Utah that is producing five hundred tons a year for electronics. Total United States consumption of titanium was 24,100 tons in 2020.  Two additional titanium mines in Nevada and Utah have been idled due to market conditions but could produce upwards of 23,500 tons in a year if reactivated.

Finally, the fifth, aluminum figures significantly in the fabrication of several modern naval ships such as the Independence-variant of the Littoral Combat Ship, Spearhead-class expeditionary fast transport and various exhaust components and superstructure of the Navy’s fleet. Aluminum is imported as scrap, refined material or as raw bauxite that is then refined domestically. In 2020, the United States imported over 75 percent of its bauxite and 49 percent of its alumina—precursors for aluminum. Primary sources for these imports are Brazil, Australia, Jamaica, and Canada.

Today there are actions the U.S. government has taken to secure strategic materials, these can be categorized as protections from foreign predatory practices, expansion of domestic production, and strategic stockpiling.

In 2018, President Donald Trump, in order to protect the U.S. industry from predatory practices, exercising the authority granted by the Trade Expansion Act of 1962, imposed duties on aluminum imports from China. That decision was based on findings of the Commerce Department that China had been dumping imports, causing harm to the nation’s security.  The Trump administration subsequently expanded those anti-dumping duties to an additional eighteen countries.

Lastly, since the oil shocks of the 1970s the nation has maintained the Strategic Petroleum Reserve, but today the military stockpiles a range of materials needed in a crisis. For example, the National Defense Stockpile and the Defense Logistic Agency’s (DLA) Warstopper Program are conceived to ensure the Department of Defense has war reserves adequate to see it through the initial phases of a crisis. Less clear is how long these stockpiles would last in a prolonged war.