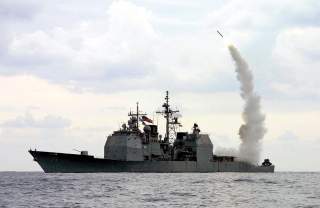 “No war is just except one which is waged after demands for reparation have been made, or the war has been officially declared and proclaimed.”—Cicero

Sometimes I wonder how we got here. I joined the army at seventeen, in July 2001, back when peace was the norm, duty in Korea was exotic, and a quick jaunt to Kosovo was just close enough to war to generate stories, but distant enough to rule out any real danger. Sixteen years later, launching fifty-nine missiles into a sovereign country—Syria—barely registers as war and only penetrates news coverage to fuel domestic political gossip. My fourteen-year-old was born in wartime and hardly notices the latest strike. Who can blame him? After all, when aren’t we bombing someone—Iraq, the “Islamic State,” Yemen, Afghanistan and Libya—so who cares? It’s enough to make you scream, as though you’re the only one who notices the lunacy. When did this become a country where Senators John McCain and Lindsey Graham—two guys so hawkish they’d bomb Bermuda tomorrow at the slightest hint of an indignity—seem, even sometimes to me, to be the sober, respectable voices on foreign policy?

It’s all so routine that it appears legit. But the thing is, there’s much legal ambiguity. The War Powers Resolution of 1973 establishes that an American president may only deploy the armed forces either after a congressional declaration of war, or in “a national emergency created by an attack upon the United States, its territories . . . or its armed forces.” The situation in Syria, of course, meets neither of those qualifications, though the president did carefully label the recent cruise-missile strike on an air base in Syria as in America’s “vital national security interest.” Clearly that’s debatable, hinging as it does on an exceedingly lax interpretation of the meaning of both “vital” and “security.”

Short of these two conditions, the law requires a congressional Authorization for Use of Military Force, or AUMF. Only don’t expect Republican and Democratic representatives to rise up as one, be counted, and take a stand. This is the same august body that can’t agree on health care or judgeships, no less the grave burdens of war and peace. Besides, in a country none too happy with its wars, such votes are risky and they have elections to win. They aren’t likely, for instance, to forget that a single vote on the Iraq War Resolution of 2002 may have cost Hillary Clinton the 2008 Democratic primary. Better to play it safe and hand off such responsibility to the president, and the Constitution be damned.

That means the latest air and missile strikes in Syria presumably fall under the existing, sixteen-year-old AUMF, which authorized broad presidential authority to use “force against those nations, organizations, or persons he determines planned, authorized, committed, or aided the terrorist attacks that occurred on September 11, 2001.” Of course, at that time, ISIS didn’t even exist. True enough, but the last three administrations had a ready retort—you see, Al Qaeda in Iraq derived from, or at least drew ideological motivation from, “classic” Al Qaeda, and then ISIS grew out of AQI. So while ISIS didn’t itself mastermind the attacks, it still held some relationship—however flimsy—to the original perpetrators.

As for the fifty-nine Tomahawk missiles fired at Assad’s air field last month, it’s hard to imagine how that relates to 9/11. After all, Assad’s forces vociferously (sometimes) combat ISIS. What, then, is the new threshold for invoking the standing AUMF to escalate America’s Middle Eastern wars? A nominally “Muslim” adversary? A vaguely “Arab” threat?

If that isn’t a formula for perpetual war waged unilaterally by a single, unchecked executive, I don’t know what is. Perhaps instead, Americans should be wary of lumping new conflicts under such a broad piece of legislation, passed all but unanimously in an emotionally charged atmosphere, just days after 9/11, within sight of the still-smoking Pentagon. Maybe policymakers ought to briefly pause and consider the warning of Rep. Barbara Lee, spoken as she cast the lone vote against the AUMF: “As we act, let us not become the evil that we deplore.” To which I’d add: let us not fall victim to the facile force of habit.

None of this is normal; we must raise questions, demand explanation and take responsibility for what is executed in our name. The health and survival of the republic require it.

Major Danny Sjursen is a U.S. Army officer and former history instructor at West Point. A native of Staten Island, NY, he graduated West Point and led reconnaissance units in both Iraq and Afghanistan. He earned his MA in History from the University of Kansas and is pursuing a PhD in History. His book, a memoir and critical analysis of the Iraq War, is Ghost Riders of Baghdad: Soldiers, Civilians, and the Myth of the Surge (University Press of New England, 2015). His work has appeared in Tom Dispatch, War on the Rocks, The Nation, The Huffington Post, Salon, WhoWhatWhy, The Strategy Bridge, Small Wars Journal, and the Kansas City Star. The views expressed in this article are those of the author and do not reflect the official policy or position of the Department of the Army, Department of Defense, or the U.S. Government.