America Alone at the United Nations 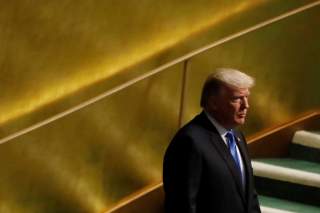 On Tuesday morning, “America First” took center stage at the United Nations. Donald Trump has long dismissed multilateralism, rattling America’s oldest friends and the alliances that preserve our national security. His administration has taken an axe to the State Department and used the United Nations as a punching bag. The message to the global community has been clear: it’s Trump’s way or the highway. This week, he delivered that message in person to world leaders gathered at the UN General Assembly.

President Trump set out what his brand of nationalism means for global community. The United States would continue to act abroad to safeguard its security and pursue economic prosperity. But it would no longer seek to promote American values or its democratic system of government beyond its borders. By separating American interests from American values, Trump cast aside the mantle of moral leadership in the world. In doing so, he broke sharply with prior occupants of the White House from both parties. The message to those fighting for democracy and human rights in their countries around the world was clear: you are on your own.

Much of Trump’s speech focused on the threats of nonproliferation, but his rhetoric on Iran undermined his North Korea message. Trump renewed veiled threats to pull the United States out of the nuclear deal with Iran, despite the insistence of inspectors that Iran is in compliance with the terms of the deal and without presenting any evidence to the contrary. Pulling out of the Iran deal would make a nuclear Iran more likely, and significantly increase Iranian aggression in the Middle East and the chances of conflict with the United States.

Trump condemned North Korea’s provocations and called on “all nations to work together to isolate the Kim regime until it ceases its hostile behavior.” But the president didn’t seem to recognize that no one will believe the United States is serious about finding a diplomatic solution for North Korea if he’s actively undermining an accord that's working with Iran. By torpedoing the Iran deal, Trump would undermine any serious attempt at nonproliferation. He also would hasten the slide towards conflict in two theaters in a manner that promises to estrange allies and partners alike. The result could set the United States on the path toward hostilities in which “America First” becomes America alone.

Elsewhere, Trump referred to the global humanitarian crisis of refugees and displaced people, but the message he sent was much more of a cold shoulder than a warm embrace. At home, Trump has held firm to his campaign promise to cut back on the number of refugees entering the United States and has pushed forward with his controversial travel ban on Muslim countries. As he continues to close America’s doors on the world’s refugees and slash America’s assistance for helping the world’s displaced, he encourages countries around the world to do the same. This approach promises to exacerbate—not fix—the problem. As Trump again sidesteps America’s leadership role, sixty-five million displaced have only more misery on the horizon.

Trump’s speech was also notable for what he left out.

Nowhere to be found was a mention of climate change, perhaps the only existential threat facing the United States and the world. This week, the world’s nations are recommitting themselves to the goals of the Paris climate accord. But by withdrawing the United States from the agreement, the United States now finds itself in an exclusive club alongside Nicaragua and Syria in disavowing the most significant agreement on the future of the global commons. More ominously, the Secretary-General has warned that Trump is creating a vacuum in global power politics that others will seek to fill.

Finally, it’s curious that, in a speech about the primacy of sovereignty, Russia got away with a mild slap on the wrist over Ukraine and no mention of its meddling in U.S. and European elections—the very heart of our democracies. Trump spent more time lambasting Cuba, Venezuela and the evils of socialism than addressing the threat posed by Russia, which senior Pentagon officials routinely describe as a—if not the—top threat to the U.S. national security.

At the end of the day, Trump’s language and actions this week, and since taking office, are sending a clear message to the world: this is a dog-eat-dog world, and America is looking out for itself. This message was captured in Trump’s approach to the United Nations. While Trump talked about making the UN more effective, he made clear that America was not willing to lead in doing so—a necessity if the UN is going to be able to help in tackling the world’s greatest challenges. The main takeaway from Trump’s first appearance at the UN was the conspicuous absence of American leadership.

Michael Fuchs is a senior fellow at the Center for American Progress, and most recently was a deputy assistant secretary of state for east Asian and pacific affairs.

Hardin Lang is a senior fellow at the Center for American Progress, where he focuses on U.S. national security and multilateral affairs, Middle East policy, and the role of Islamists in the region. Previously, he enjoyed a twelve-year career with the United Nations.