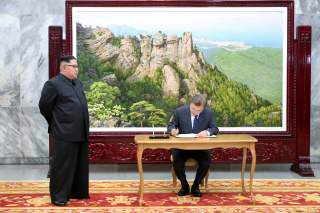 The talks between the United States and North Korea over the North’s denuclearization have ground to a halt. Both sides have moved a little in the last few months and are now pushing for exorbitant concessions based on mild, earlier concessions. The result is a stalemate.

This disconnect was entirely predictable. The North and United States are separated by an ideological and strategic gulf. Most of the expert community argued in the spring that President Donald Trump wildly overrated the likelihood that a North Korean denuclearization and peace were at hand. That skepticism is now vindicated. Any denuclearization of North Korea will almost certainly take much longer than the one- or two-year frameworks thrown around by Trump administration.

On the American side, the Trump administration continues to make unrealistic demands North Korea will never assent to. For months, this was CVID—the complete, verifiable, irreversible disarmament of North Korea. The sheer scale of that demand was staggering. North Korea spent over forty years developing these weapons. To give them all up—“complete”—would have been an astonishing concession unparalleled in the history of nuclear diplomacy. Verifiability would have meant an intrusive inspection regime, and irreversibility would have meant the psychical removal of the human capital behind the program—that is, thousands of North Korean nuclear technicians and their families. None of that was ever remotely credible.

Just as astonishingly, the Trump administration did not even bother to suggest a swap or trade for CVID. Team Trump seemed to think that North Korea could simply be bullied into it. Unsurprisingly, the Trump administration has since dropped such fantastical language. But it is now pushing another unrealistic proposal—that North Korea give up sixty to seventy percent of its arsenal. While less heroic than CVID, this is so over-optimistic, that one has to wonder if this proposal is driven by something else, such as the utility of North Korea negotiations as talking point in the upcoming U.S. congressional elections. Once again, Team Trump is showing its lack of seriousness by not even developing a concrete swap offer.

The North Koreans have come back with their own unlikely proposal—a formal peace treaty among the United States, North Korea, South Korea, and China. This apparently is merited by North Korea’s return of the remains of U.S. soldiers missing in action from the Korean War. Like CVID-for-nothing, this is grossly imbalanced. A peace treaty is of great value to the North—for legitimacy purposes, while simultaneously delegitimizing the United States/United Nations presence in the South—but of little value to the allied side. It also illustrates yet again North Korea’s harsh willingness to exploit humanitarian issues for strategic gain, much as it is using upcoming inter-Korean family reunions as a political tool in inter-Korean negotiations.

The great misconception about a peace treaty is that it is about peace in Korea. That is not really the case. It is true that the Korean War has not formally stopped, but the armistice— peace—has held, as have the deterrence and containment of North Korea, for seven decades. “Peace” in Korea does not require this treaty, nor will the treaty bring a meaningful reduction in tension or spur sudden demobilization on both sides. The political divisions between the robust democracy of South Korea and personality cult totalitarianism of North Korea are so large that no legal statement will suddenly do away with that. A cold peace is possible—just as there was between the United States and Soviet Union in the Cold War, but we already have that. A treaty is not necessary for that.

Instead, the real purpose of a treaty is the legitimization of North Korea as a separate, distinct Korean state side-by-side with the real Korea, that is South Korea. On every conceivable measure, South Korea is a vastly more successful, happy, healthy, wealthy place. The competition between Korean models is long over. Both Koreas continue to constitutionally claim that they govern the whole peninsula, but only one of those threats is real. North Korea could not even govern the South if it somehow managed to take it over. By contrast, we could all foresee North Korea imploding (collapse, breakdown) or exploding (in war), followed by unification. Forestalling this possibility—halting the now robust, long-standing discussion of unifying the peninsula on Southern terms—is the Northern point of seeking a treaty.

The treaty would place North Korea on an equal diplomatic plane with South Korea and the United States. Neither currently recognizes North Korea. Both accept that the South is the rightful ruler of the whole peninsula, and in the post–Cold War era that threat is far more real to the Northern elite than ever before. So a treaty would serve to end that. By formally recognizing that the war ended in stalemate, the allied side would be effectively recognizing North Korea as an emergent state from the Korean civil war, and, implicitly, its right to exist. This is the next step, after this year’s summits with Trump and South Korean president Moon Jae-in, in the slow-rolling diplomatic recognition of the North. After this would come levels of diplomatic recognition, ideally ending in the exchange of embassies.

Like the summits, this recognition of the North would be a concession on the allied part. The Trump summit was a big North Korean win; and a peace treaty would be another big win for the country. The demand for two-thirds of North Korea’s nuclear arsenal would be a similarly huge concession from the Northern side. Therein is the possibility of a big-bang deal, but those have usually failed with North Korea in the past. But critically in the next few months, as the discussion, of a peace treaty ramps up, the United States should not simply give that away as it did the Singapore summit. If there must be a peace treaty, then at least the United States must demand something very substantial for it. North Korea’s callous manipulation of America’s humanitarian interests in family reunions and MIA returns is not nearly enough for this.