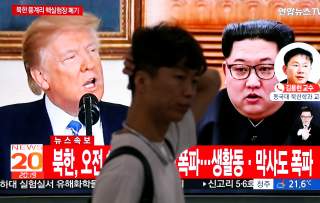 “Deterrence is concerned with influencing the choices that another party will make, and doing it by influencing his expectations of how we will behave.” — Thomas C. Schelling, The Strategy of Conflict (1960).

In the final analysis, North Korean President Kim Jong-un will never surrender his country’s nuclear weapons. To do otherwise would be to willingly renounce that country’s only real and residual claim to meaningful international power. It follows that “complete denuclearization” is plainly an ill-considered diplomatic goal for the United States, and that Washington should focus instead on creating the necessary conditions for stable nuclear deterrence.

For the United States and its pertinent allies, any upcoming negotiations with North Korea should be oriented to struggles of “mind over mind,” not merely mind over matter. During these struggles—which ought to be less about curtailing specific weapons than about diminishing overall enemy threats—each side, at least as long as it remains rational, will doubtlessly seek “escalation dominance.” Simultaneously, however, both Washington and Pyongyang will strive for this objective without critically endangering their own prospects for national survival.

Should the American side sometime calculate that its North Korean counterpart is not fully rational, incentives to undertake far-reaching military preemptions could then become compelling or even overwhelming. At the same time, allowing the United States to reach this “all or nothing” set of choices would reveal unimaginably shallow American diplomacy. While American lawyers might claim U.S.-led defensive first strikes or preemption are “anticipatory self-defense,” any such “victory” would be narrowly legalistic and strategically unsatisfying.

Key questions arise. What would it mean to be “victorious” if only at the intolerable cost of extraordinarily high fatalities? Of what conceivable benefit could it be for the United States to claim that its defensive first strike was lawful, but only to then suffer concurrently destructive enemy retaliations?

What is needed, going forward, is the creation of a stable nuclear deterrence regime between Washington and Pyongyang, one that takes into proper account the corollary expectations of Moscow and Beijing. Should this regime fail, and President Donald Trump still decides to undertake certain selective military actions against North Korea, the general outline of Kim Jong-un’s response are easy to project. Then, Pyongyang, then having no preferred option of armed reprisal, could strike (a) the American homeland; (b) American military forces in the region, and/or (c) other targets in Guam, Japan or South Korea.

Whatever North Korea’s preferred configuration of selected targets, Kim Jong-un’s retaliatory blow would likely be designed so as not to elicit any unacceptably massive (possibly even nuclear) American counter-retaliations. However, any such carefully reasoned conclusion by Kim would depend, among other things, upon the Korean dictator’s own rationality and on largely unpredictable synergies between Kim’s level of rationality and the rational calculations of President Donald Trump. Such synergies—or what the generals would prefer to call “force multipliers”—could produce instability outcomes that are even more insidious than the simple additive sum of their “parts.”

If President Trump should ever decide to launch a conventional defensive first strike, the North Korean response, whether rational or irrational, could conceivably be “disproportionate.” In that prospectively chaotic case—one rife with unprecedented potential for accelerated competition in risk-taking—the introduction of nuclear weapons might not be excluded. If, on the other hand, President Donald Trump’s defensive first strike against North Korea were dramatically less than massive, a fully rational adversary in Pyongyang might then determine that his chosen reprisal be correspondingly “limited.” But if Trump’s consciously rational and systematically calibrated attack upon North Korea were wittingly or unwittingly launched against an irrational Kim, the plausible response could still be an “all out” retaliation.

Any such presumably unanticipated response, whether nuclear or non-nuclear, would be directed at some yet undeterminable combination of America, South Korean, and/or Japanese targets.

It could inflict enormously substantial harms.

Even if only fully rational adversaries are playing it, any advancing strategic “game” between Washington and Pyongyang will demand each player to strive relentlessly for “escalation dominance.” It would be in the manifestly unpracticed internal dynamics of any such rivalry that the prospect of mutual catastrophe could suddenly arise. Looking ahead, this plainly unwanted outcome could be produced in unexpected increments of escalation by one or both national players, or—instead—by any sudden quantum leap in destructiveness undertaken by either side.

It is all bewilderingly complex, and unprecedented. In facing off against each other for “escalation dominance,” even under the most ideal assumptions of mutual rationality, both President Trump and President Kim Jong-un would have to scrupulously concern themselves endless factors. These include possible miscalculations, errors in information, unauthorized uses of strategic weapons, mechanical or computer malfunctions, and presumptively measureless nuances of cyber war.

There is one final reminder for this president. Trump will need to bear in mind that it is always scientific nonsense to assign mathematical probabilities to unique events. Because an authentic nuclear exchange between North Korea and the United States would represent precisely such a singular event—one with utterly unforeseen intersections, interactions, and synergies—no one can predict with any reassuring degrees of accuracy whether such a conflict (even an asymmetrical conflict) would be more or less likely.

Should President Trump ever decide to strike North Korea preemptively on the erroneously optimistic assumption that his generals have “got everything covered,” he would need to be reminded of the classic warning offered by Carl von Clausewitz. Long before military planners could ever even imagine a nuclear war, the insightful Prussian general and strategist had cautioned leaders in his On War about “friction,” or “the difference between war on paper, and war as it actually is.” Accordingly, nuclear brinksmanship between Washington and Pyongyang would take place in uncharted waters, and require both participating leaders to steer a steady course between escalation dominance and national survival.

Whether this difficult requirement could actually be met is still anyone’s guess.

Nuclear diplomacy is a “game” that America’s president must sometime be prepared to play with North Korea, but it is always a complex contest of strategy, not merely one of chance. In any such game where there exist certain overriding common interests between the players—most notably national survival. Therefore, choosing the best course of action must ultimately depend upon what Trump expects from the other side. In this bewildering game of interdependent decision-making, a largely unpredictable clash of private wills obligates the continuous recalculation of intersecting risks. For instance, it would be foolhardy to expect North Korean denuclearization or to ever seriously consider an American preemption.

Instead, American interests should immediately be focused on more modest but still-realistic movements toward stable mutual nuclear deterrence. Such intelligence-based initiatives would necessarily take into close account the pertinent expectations of Russia and China. Expressed cumulatively, Washington’s core responsibility must be to influence only reasonable expectations of its North Korean adversary, and not to attempt any changes to Pyongyang’s most conspicuously immutable security objectives.

Louis René Beres was educated at Princeton (Ph.D., 1971), and is Emeritus Professor of International Law at Purdue. His twelfth book, Surviving amid Chaos: Israel’s Nuclear Strategy, was published in 2016 by Rowman & Littlefield.

Image: A man walks past a TV broadcasting a news report on the dismantling of the Punggye-ri nuclear testing site, in Seoul, South Korea, May 24, 2018. REUTERS/Kim Hong-Ji