America and Russia Face the Same Peril In the Coronavirus 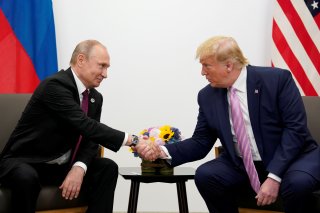 Donald Trump has announced the easing of quarantine measures and presented a plan for America's economic recovery. According to the president of the United States, the peak of the coronavirus has passed. Meanwhile, new restrictions are being introduced in Russia. There are some who believe that the new tightening of measures to control the movement of citizens is not in response to the fight against COVID-19, but rather an excuse to introduce a surveillance system that is unlikely to cease after the crisis is over. Russians all of a sudden are recalling George Orwell, who in his novel 1984 depicted a totalitarian state that brainwashed its population into surrendering essential freedoms. According to this logic, freedom and information technology are contradictory by definition.

The way a country's leadership reacts to the pandemic can be used to judge the policies of the state in general. An anti-Soviet-minded friend of mine once told me that the Russians won the space race only because, unlike the Americans, they did not value human life. According to the latest data on the number of coronavirus victims and statements by the head of the White House, the priority of Russia's main opponent is not human lives, but the economy.

Trump recently stated that if less than two hundred thousand people die as a result of the pandemic that this is already a good indicator. The cynicism of the American leader sounds shocking. Yet the view that more people will suffer from a collapsed economy also has merit. More than twenty million Americans have applied for unemployment benefits, and the economic consequences of the pandemic could be disastrous for the world as a whole.

Residents of several states have already demonstrated against the self-isolation regulations. They are also protesting in Russia. Participants of the rally in Vladikavkaz do not believe in the pandemic, calling the coronavirus "a global conspiracy against the working people." Whether the Kremlin will listen to the calls of unemployed conspiracy theorists will be known by the end of this month. However, the rhetoric in the Russian media is now shifting, and the concept that "we all may die” at the hands of the virus and that no cost is too high to avoid it has become less popular in talk shows on federal channels.

Before all these events occurred, I recorded an interview with a famous psychic. It was a simple New Year's review with a loud headline—"What Awaits Russia in 2020." Right now, this is the most popular video on my channel. People want to know what is waiting for them, and they are ready to believe anyone.

It was the fear of the unknown that caused the rally in North Ossetia. Unrest in Vladikavkaz may become a trigger—an example for other regions of Russia to follow. Yes, not enough time has passed to produce hunger riots across the country, but the loss of your only source of income is a good reason to demand your rights.

The Kremlin rendered the protest illegal but did not explain the basis on which laws people were imprisoned in their own homes without any money. The mistake of the Russian government is that its citizens were forbidden to work without compensation for their losses. Payment of compensation could cool the ardor of the unemployed for some time, but the government appears to be in no hurry to undertake any measures other than introducing additional restrictions.

I once asked a well-known politician: who would he save if he had to choose between a cancer patient and a man with a broken leg when only one ambulance is available? It is said a patient with a fatal disease will no longer benefit the state, and the one who injured his leg can be saved. I explained my question by saying that a top politician needs to be able to make such a choice. He responded that we should help everyone. His answer even went so far as to compare the American health care system to the cruelty of Hitler, as he noted that a woman once died live on American television because she could not get help due to her lack of insurance.

Whether my interlocutor was earnest when answering my question is unclear. But one thing is absolutely clear—leaders of nations currently have a similar decision to make. It is necessary to weigh the scale of human victims now against an even greater number of victims over a longer period of time.

The leader of a great power should be capable of being a cynic, and Trump’s business experience has turned him into one. We live in an era in which cynicism may be the only way out of the crisis. Putin, in turn, has only two options: to continue to keep people locked up, but to compensate them for all financial losses at the expense of the budget, which is already severely strained by the collapse of the oil market, or a more far-sighted option: allow Russians to earn money. These actions are the only way to avoid mass protests across the country. Yes, Russia and the United States are completely different economically and in their respective mentalities, but in the face of the threat of the coronavirus and collapse of the economy, everyone is equal.