Is the U.S. Better at Assimilating Immigrants Than Europe? 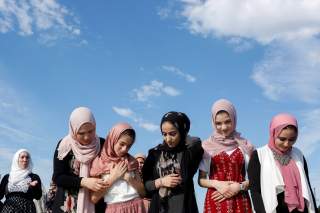 Since the rise of the Islamic State in 2014, the United States and Europe have seen a dramatic increase in the number of terror attacks and attempted attacks perpetrated in the name of Islam. Concurrently, the migrant crisis has brought a massive flood of immigrants to Europe from Muslim-majority countries, which has resulted in a rise in sexual assaults, among other things. The combination of these two phenomena has launched a debate about Muslim immigration and whether Europe is able and equipped to assimilate such a large influx of newcomers. That conversation has also spread to the United States as fears of terrorism continue.

Europe’s experience with Muslim immigration is, of course, vastly different than America’s, where assimilation of immigrant populations into mainstream society has been more successful. There are a number of reasons for this, all of which should give Americans confidence and provide an example for Europe to emulate as it grapples with the migrant crisis.

Last week, the Pew Research Center released its latest survey of American Muslims (previous surveys were conducted in 2007 and 2011), providing the public with an updated peek into the views and religious practices of Muslims in America. The 3.35 million adult Muslims living in America today make up about one percent of the population. Of these adult Muslims, about 82 percent are U.S. citizens. While the center asked a large array of questions, let’s just take a look at a few of the highlights.

American Muslims, according to the survey, are fairly observant, including their dress, daily prayers and mosque attendance. A slim majority appears not to adhere to fundamentalist views. Of those surveyed, 52 percent said that traditional understandings of Islam need a new interpretation and a majority (64 percent) said that there is more than one true way to interpret Islam. While a significant percentage obviously have a strict interpretation of Islam, it is encouraging that they do not make up the majority.

Another important metric for measuring assimilation is the extent to which immigrant populations mix with members outside of their community. The survey found that Muslims are less likely to say all or most of their friends are Muslim than they were in either 2011 or 2007. Today, only 36 percent made that assertion compared with 49 percent in 2011. Also, 55 percent said that Americans are friendly toward them, which is up from 48 percent in 2011, although 75 percent said there is a lot of discrimination toward Muslims.

One major concern about Muslim immigration has to do with the compatibility between Islam and the democratic system. Islam, beginning with its inception in the seventh century, has always been a fundamentally juridical religion. Its texts, including the Quran and the Hadith, outline the laws by which Muslims should live, from laws about stealing to inheritance. Up until the end of World War I, the Ottoman Empire was the Islamic caliphate, a theocracy based on Islamic law. Pew asked whether Muslim Americans see any natural conflict between Islam and democracy. Of those surveyed 65 percent said that there is no such conflict, while 35 percent said there is.

But despite the number of Muslims who see such a conflict, almost all expressed strong patriotic sentiments. According to Pew, “the vast majority of U.S. Muslims say they are proud to be American (92%), while nearly all say they are proud to be Muslim (97%). Indeed, about nine-in-ten (89%) say they are proud to be both Muslim and American.” Pride in one’s country is a vital part of assimilating and becoming a full participating member of a society and nation. The kind of patriotism that is often found among immigrants can have much to do with appreciation of opportunities and freedoms that a country can provide, especially in comparison to their country of origin.

So what does all this mean? It would seem to imply that the Muslim American community is making significant strides toward assimilating into American society while still retaining its religious and cultural beliefs. Muslim Americans vote and participate in the democratic system and believe that through hard work anyone can succeed, the bedrock of American political philosophy.

These results stand in stark contrast to the attitudes and behavior of Muslims in Europe, where there is less pride taken in belonging to a given country and a higher degree of isolation and ostracization. A 2016 survey found that 44 percent of Muslims in Europe hold fundamentalist beliefs, described as “a belief in returning to the roots of Islam, coupled with an adherence to a strict interpretation of the Quran.” The survey also found that 57 percent would not be friends with homosexuals and 54 percent think of the West as an enemy of Islam. In France, 72 percent of Muslims reportedly would prefer Sharia law to be the primary or sole law of the land. In the UK, 69 percent feel the same way, according to the survey.

Why such a contrast? As the survey data shows, Europe has struggled to assimilate not only those Muslims who have lived there for decades but also the more recent surge of migrants from the Middle East and North Africa. One reason for this is that European nations have a history of colonialism in the Muslim world that has put them in a much more intimate and tense relationship with the peoples of those countries. For France, this meant bringing laborers from Morocco to help replenish the workforce after the devastations of World War II. While neither France nor the migrant workers envisioned this as a permanent move, that’s what ended up happening. Workers arrived in large numbers and eventually their families followed, dramatically increasing the North African population in France. The bloody Algerian War also meant a lasting legacy of bitterness between France and its former subjects, complicating the relationship between the native French population and Algerian immigrants to France.

Then there’s the geographic factor. It’s obviously much easier to travel to Europe from North Africa and the Middle East—whether legally or illegally—than it is to make it to America. In addition, because the United States has had traditionally lower numbers of Muslim immigration, there are far fewer family reunifications to facilitate migration. For these reasons, it makes little sense for Americans to worry that what’s happening in Europe could possibly happen here in the United States. We will not face anything like the sudden change in demographics that Europe is facing, which makes assimilation for any group so challenging.

There’s also the issue of why Muslims come to America versus Europe. There is arguably a self-selecting group of Muslims who come to the United States in search of the very same American dream that has attracted immigrants throughout Europe for generations. Whereas European Muslims, as discussed above, came to Europe under very different circumstances and often did so purely for the economic opportunities. That’s one reason European Muslims have attempted to remain separate from the society at large in ways American Muslims have not.

But the primary reason why Muslims are assimilating more successfully in America has to do with the fundamental differences between American and European societies and their conception of citizenship. European nations were founded as ethnic nation-states. As much as European leadership would like to pretend otherwise, nationalism is at the heart of European identity and civilization, making the assimilation of Muslims so difficult. Even Angela Merkel, the grande dame of inclusivity and multiculturalism, said in a speech in 2010 that the attempt in Germany to create a multicultural society had “utterly failed” and that people from different cultural backgrounds living together simply didn’t work.

America, on the other hand, was founded on the principle that all humans have fundamental natural rights, and that it’s these rights that put all men and women on an equal footing when it comes to citizenship and belonging to the body politic. Thomas Jefferson once wrote that the real test of America’s success would be if it could welcome “even” Muslims, who at the time were considered the ultimate “other.” He even speculated that, in theory, a Muslim should be able to serve in high elected office, even become president. The unique vision the Founders had for the American project included anyone regardless of beliefs.

None of this is to say that Muslim immigration to America has been flawless or that perfect assimilation is occurring. The Orlando nightclub and San Bernardino attacks—and the more than one hundred individuals arrested in the last few years for aiding the Islamic State—vividly demonstrate that America also faces challenges. And there’s no doubt that radical and fundamentalist strains of Islam are present in some of the mosques and Islamic centers around the country—after all, 17 percent of American Muslims have acknowledged that there is “a great deal” or “fair amount” of support for extremism in the United States.