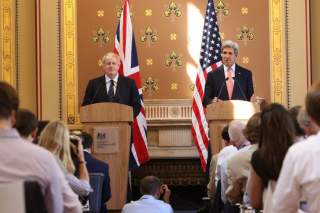 In June 17.4 million Brits voted to leave the European Union. It was the single largest political mandate the British public has ever delivered.

The United Kingdom is only now entering the beginning stages of actually leaving the EU — a process that will take at least two years according to the treaties.

But once the unshackling is complete, the UK will be truly able to pursue an independent foreign policy separate from the EU’s lowest-common-denominator approach. The United States will then have a friend more confident, able, and willing to act on the global stage.

At the heart of the “Leave” campaign was Boris Johnson — Britain’s new Foreign Secretary. For a diplomat, Johnson has a colorful, if not downright controversial, past. As he himself admits, he has offended numerous luminaries through his decades of prolific writing.

Far from being a “little Englander,” as his critics try to paint him, Johnson is a polyglot (he recently conducted a press conference in French) with worldly experience who knows what Britain’s rightful place should be on the global stage. He is probably Britain’s smartest politician, (both in an academic and political sense) and will bring much needed energy and charisma to the UK’s Foreign Office.

Since taking a prominent role in the Brexit campaign, Johnson has been barraged by ad hominem ridicule and criticism — from both sides of the Atlantic. His detractors insist he will fail in his new role. But from becoming the first Tory mayor of London, to overseeing a spectacular 2012 Summer Olympics, to leading the historical and successful campaign to leave the EU, to becoming Foreign Secretary after many suggested his political career was over, Johnson has a track record of proving his detractors wrong. The smart money should bet against him this time.

What does this mean for the United States? As Johnson settles in and his U.S. counterpart, Secretary of State John Kerry, eyes the end of the administration he serves, both men should focus on three pressing issues important to both nations for the remainder of 2016.

Issue 1: The campaign against ISIS in Iraq. The war is reaching a critical point. Ramadi fell from ISIS’ clutches last December and Fallujah in May. However, the real prize is liberating Mosul, Iraq’s second largest city. The preparation for the assault has been months in the making. This winter will probably be the opportune time for Iraq to act. The U.S. and the UK must work closely to provide crucial support — air support, surveillance and intelligence gathering, and other battlefield “enablers.” Losing Mosul would be a huge blow for ISIS.

Issue 2: Stability in Eastern Europe. Russia’s military resurgence and the war in Ukraine constantly threaten regional security and stability. Many good decisions — such as more rotational forces to the Baltics and developments in Europe’s missile defense — were taken at the recent NATO Summit in Warsaw, but Anglo-American leadership will be needed to ensure they are seen through. In addition to realizing NATO’s defensive strategy for the region, the America and the UK must ensure Europeans do not go soft on Russian sanctions.

Issue 3: The selection of the next UN Secretary-General. This issue is somewhat linked to the second issue. Custom says that the next Secretary-General should come from Eastern Europe, and there is a growing movement that this tradition should be respected. There has also been a call for the next Secretary General to be a woman. In a recent straw poll held by the UN Security Council, the only candidate meeting both criteria was Bulgarian Irina Bokova. In promoting and opposing candidates, the UK and the US need to work together.

One particularly alarming candidate is Argentina’s foreign minister, Susana Malcorra. While serving as chief of staff to Secretary-General Ban Ki-moon, she demonstrated appallingly poor judgment during a child molestation crisis involving UN peacekeepers in the Central African Republic. The UK also has legitimate concerns due to Argentina’s recent aggressiveness toward the Falkland Islands. Yet Ms. Malcorra is reportedly the Obama administration’s top choice. That is no way to respect the concerns of our closest ally.

Considering Johnson’s track record, there is little doubt that he will rise to the occasion and be a superb Foreign Secretary. His appointment presents a golden opportunity to reinvigorate the U.S.-UK special relationship for the good of the world. Far from forcing Britain to become insular, Brexit should result in a UK that is far more engaged globally. The United States should take advantage of this.

Luke Coffey is the director of The Heritage Foundation’s Allison Center for Foreign Policy Studies (heritage.org).