America Can Do More with Japan to Shape China's Impact 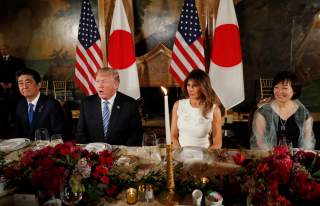 The twenty-first century seems destined to be an Asian century with China’s growing hegemony. For the foreseeable future, therefore, the U.S.-Japan alliance will continue to be a fulcrum of U.S. foreign policy in advancing democratic norms, economic prosperity, and multilateral cooperation around the world.

Japan has been a reliable partner of the United States since 1945, and the U.S.-Japan alliance continues to inform Tokyo’s strategic vision for responsible governance, open markets, and global institutions. However, the gap in U.S.-Japan Cold War relations has widened since the Soviet Union’s collapse, China’s rise to great power status, and North Korea’s development of a credible nuclear deterrent.

Today, U.S. policymakers understand that, as a close ally and Asia’s largest economy behind China, Japan is well-placed to become a principal advocate of U.S. interests in Asia. To date, this potential has been largely underutilized, with U.S. interference in Japan’s efforts to establish an Asian Monetary Fund after the 1997 East Asian financial crisis stymieing Tokyo’s initial forays into regional multilateralism. Recently, however, Japan has become a more active proponent of regional integration independent of the United States, stepping up its involvement in regional institutions like the Asia-Pacific Economic Cooperation and the Association of Southeast Asian Nations (ASEAN). Furthermore, Tokyo is spearheading passage of the Comprehensive and Progressive Agreement for Trans-Pacific Partnership in 2018.

While Japan’s independence and leadership is a positive development, its growing assertiveness creates new risks for the United States. In particular, Japan may begin to hedge against its commitments to the United States if the U.S.-led liberal international order continues to splinter from the frictions caused by globalization, technological disruption, and the fallout of the Great Recession. Already, Japan has demonstrated pragmatic instincts for alliance management. Tokyo’s economic investments across the Indo-Pacific, Japan’s growing trade with China—which offsets the geopolitical tensions between them—and even Prime Minister Shinzo Abe’s tentative outreach to Russia’s Vladimir Putin, underscore this.

Going forward, Japan will retain its critical ability to shape the contours of U.S. policy in Asia. As such, the United States should be cognizant of Japan’s shifting domestic economic priorities as an aging society, as well as its security prerogatives as an isolated island nation lacking in vital natural resources and surrounded by expansionist neighbors.

Beginning with President Obama’s pivot to Asia, and continuing with the Trump administration’s “Free and Open Indo-Pacific” strategy, which resurrects a concept submitted by Abe in 2006, the United States has begun to scale back its self-imposed limits on military engagement in Asia since the Vietnam War. The informal Quadrilateral Security Dialogue (Quad), comprising the United States, Japan, Australia, and India, also reconfirms Washington’s commitment to a robust Japan.

Key to U.S. support for Japan is its forward defense emplacements protecting the freedom of navigation and rule of law in the Western Pacific. The U.S. military presence in Japan, however, is a perennial source of animus for Japanese left-wing ideologues and extreme pacifists, as well as for the people of Okinawa—which hosts half of the fifty-four thousand American troops currently stationed in Japan. Noise pollution, violent crime, and aircraft accidents have been recurrent problems affecting Okinawans. The United States favors relocating its primary military outpost in Okinawa to a less populous coastal area on the island, but first, it must contend with local political posturing to end military operations there entirely.

Given China’s military buildup in the South China Sea and encroachment on the Senkaku Islands, the United States will be under increasing pressure to mitigate Okinawan dissatisfaction with its military bases. A recent proposal by former Deputy Secretary of State Richard Armitage and Harvard scholar Joseph Nye, to introduce jointly-operated bases on the Japanese mainland, could reduce the potential for Okinawa to become a wedge issue in the bilateral relationship.

During the Cold War, successive U.S. administrations sought a larger role for Japan in the defense of Korea and Taiwan from communist encroachment. While Japan’s pacifist orientation has gradually eroded, Article 9 of Japan’s constitution remains a confounding obstacle for military expansion. Efforts to adjust the scope of Article 9—including security legislation in 2015 reinterpreting the article to permit collective defense—face staunch public resistance. A motion by Abe to amend Article 9 by 2021 remains unlikely to pass political muster. However, public opinion surveys also demonstrate a majority believe that constitutional revision will be necessary in the future.

Japan’s conflicted view towards Article 9 dovetails with recent policy adjustments by the Abe government. These include (1) the establishment of a National Security Council modeled after the White House NSC in 2013; (2) the reversal of a half-century ban on arms exports in 2014; (3) the streamlining of defense technology acquisition guidelines also in 2014; (4) the launch of a government program funding scientific research with “dual-use” military and civilian applications in 2015; and (5) the erasure of a forty-year cap on military spending at 1 percent of GDP in 2017. The animating features of Japan’s threat horizon—China’s military expansion and North Korea’s nuclear ambitions—will continue stoking Tokyo’s resolve to undertake a more energetic foreign policy and defense posture.

However, Tokyo’s efforts to become a regional leader are counterpoised by the unrelenting burden of war memory on Japan’s relations with China and Korea. Despite the complications posed by China’s and Korea’s co-option of history for strategic gain, Japan can assume the mantle of an honest broker in the region. But first, it will need to square its official statements of apology and regret for World War II, not so much with the undercutting views and actions of a few right-wing politicians, but with the general antipathy that younger Japanese feel for Chinese and Koreans. By so doing, Japan has the potential to support the United States through constructive engagement with China and Korea—key stakeholders in the ongoing debates concerning weapons proliferation, global terrorism, and climate change, among other important transnational issues.

The Free and Open Indo-Pacific and Quad offer a further means of harnessing the U.S. alliance network in a cohesive Asia strategy pressuring China and Russia to respect international norms. American can help cultivate Tokyo’s relations with Canberra and New Delhi. Moreover, Washington has the opportunity to proactively engage critical decision makers like Beijing, Moscow, and ASEAN on any number of non-traditional security challenges affecting the region. In particular, ASEAN’s opposition to the rise of a hegemon in Asia aligns with U.S. and Japanese efforts to limit China’s influence, offering a strong basis for trilateral cooperation. However, recent trade frictions threaten to decouple the web of global production systems and trade agreements which are the ballast of the liberal international order. The next several years will be critical for the preservation of U.S. strategic preeminence in the region.

Japan has the potential to emerge as a key broker in the crucial discussions taking shape, given its strong ties throughout Southeast Asia and economic symbiosis with China. Therefore, the United States should double down on Japan as a champion of liberal values in Asia.

Elliot I. Silverberg is an international relations master’s candidate at Georgetown University’s Walsh School of Foreign Service. He is an editor of the Georgetown Journal of International Affairs, and has worked in strategy consulting, journalism, and the think tank and legal industry across Japan and the United States.