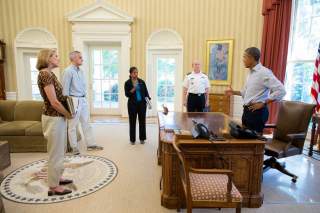 “The time has come to join Syria in a joint effort to destroy the Islamic State.” What previously was deemed unthinkable is now being widely discussed by members of the American foreign-policy community. The reason for this dramatic reversal has its roots in a number of factors: concern that IS is enjoying military success in Iraq and Syria; remorse in Washington that our enormously expensive effort to create a viable Iraqi military force has failed; the prospect that IS look-alikes are gaining traction in Libya; and anguish and anger over the beheading of American photojournalist James Foley by IS fanatics.

Much the same thinking has surfaced across the Atlantic. The UK’s former Foreign Secretary, Malcolm Rifkind, has said: “We should not be squeamish about how we [destroy IS].” They are fanatical killers that not only control much of Iraq and Syria and imperil the Caliphate’s neighbors, they have promised to strike Europe and the United States using citizens from both countries to do so. The British Army’s former head Richard Dannatt noted military advantages tethered to this “unthinkable” relationship; aircraft traversing Syria’s airspace would no longer need worry about Assad’s air-defense assets.

Meanwhile, Walid Muallem, Syria’s foreign minister, has warned the United States against penetrating his country’s airspace to attack IS targets, but he has offered to cooperate with Washington in the “war against terrorism.” President Obama and his advisers deem collaboration with a dictator responsible for 200,000 deaths among his own people loathsome. Benjamin Rhodes, the president’s deputy national security adviser has said: “It is not the case that the enemy of my enemy is my friend.” He added, “Joining forces with Assad would essentially permanently alienate the Sunni population in both Syria and Iraq, who are necessary to dislodging [IS].”

But to place collaboration with Syria in perspective, recall that last week, President Obama, his secretaries of state and defense—John Kerry and Chuck Hagel—and General Martin Dempsey, the Chairman of the Joint Chiefs of Staff, intimated that they were pondering air attacks against IS bases in Syria. The strikes would degrade major IS formations and command posts and enhance Iraq’s security. Also, they would diminish the capacity of IS fighters to resist Iraqi and Kurdish peshmerga drives to regain territory previously lost to them. A matter of larger significance—that is, who would provide the ground forces to neutralize IS—was ignored.

Toward this end, consider the merits of the following three observations:

First, the United States must help the Iraqi army and the Kurds provide the “boots on the ground,” since a significant deployment of American combatants is out of the question. Of course, they will be supported by U.S. air cover while special-forces units will be deployed in limited cases—for example, to target IS leaders, to protect crucial allied bases and to prevent a humanitarian tragedy. But even then, the forces aligned to confront IS will be inadequate. Most Iraqi units have failed to demonstrate the will or capacity to fight, and it will take time to revitalize them, while even those who have displayed military competence are not likely to display much zeal for following IS into Syria. Likewise, there is reason to question the notion that the “Kurds are determined, battle-hardened fighters.” After all, they have not fought for some time, their ranks are divided, and like their Iraqi counterparts, their passion for confronting the enemy may diminish the farther away from their homeland they operate. By contrast, Assad’s soldiers have demonstrated considerable martial skills and unlike the Kurdish peshmerga, they have the weapons and integrated command structure essential for battlefield success. Were they to have outside help endorsed by—and including—the United States, their morale would surge.

Second, American air attacks must be significantly expanded in Iraq in coordinated efforts with allied ground forces to retake territory now under IS control. Simultaneously, U.S. drones, fighters, bombers and cruise missiles must strike IS targets in Syria in a comprehensive campaign to degrade the jihadist’s fighting capacity. With Syria’s compliance, American and allied aircraft no longer need fear Syrians air-defense systems bolstered by Russian ground-to-air missiles. Then too, there would be ample Syrian spotters on the ground to identify prime IS targets.

Third, Washington must enlist the support of regional stakeholders—including those who may not share common values and may even be at odds on certain matters, but who deem IS an existential threat to their security. Since the United States is the only country capable of stitching together an international response, this will be a daunting diplomatic challenge for President Obama. One of the most important and perhaps most difficult undertakings will be to convince Iran and Saudi Arabia to cooperate—but both have cause to do so. Until recently, the notion that these two bitter enemies would cooperate was simply absurd, but the rising tide of power displayed by jihadists that deem them as future targets may compel them to reassess their strategic agendas.

Reports from Tehran indicate the mullahs fear Iran’s security would be placed in jeopardy were Iraq to fall to Sunni fanatics; this dismal prospect is magnified by the thought that they would not only control territory close to Iran, but consume all of Iraq. That outcome would encourage Sunni fighters to turn their considerable capabilities to inflict damage on Iran and its allies—say, in Lebanon. As a consequence, even hardliners in Tehran might see the wisdom of joining an international effort to destroy IS.

Meanwhile, the Saudis, like their brethren in Pakistan, are finding that they may have encouraged or supported jihadi militants that one day will turn against them. Moreover, given the advanced age of King Abdullah, a leadership change will soon occur in Saudi Arabia. To make matters worse, Middle East experts like Kenneth Pollack and Ray Takeyh warn that “his two most likely successors, Crown Prince Salman and Prince Muqrin, do not inspire confidence,” so the House of Saud is in profound trouble. Under pressure from Washington, the Saudis might find it prudent to join an international campaign to stabilize the region by deep-sixing IS. There are other stakeholders like Turkey and Russia, as well as lesser actors, whose cooperation is required to make this diplomatic venture a success. Turkey’s cooperation is murky given political uncertainty within that country and its support of some Islamic fighters, such as those in Libya. Sunnis in both Iraq and Syria might balk, but relent if they can be guaranteed that the new governments in Baghdad and Damascus will address their demands.

Western-Russian tensions also can complicate Moscow’s participation and, of course, Vladimir Putin has been a staunch supporter of Assad who, he reminds his Western critics, still enjoys the support of most Syrians living in his shrunken state—not only his fellow Alawites, but also minorities that fear Sunni fanatics who threaten to kill them when possible. Consequently, as long as Assad is in power, Moscow will continue to stand by him and sabotage any effort to compromise him.

But Putin would change his mind were he to reach one or both of the following conclusions. First, recent IS battlefield successes in Syria, such as its overrunning the Tabqa Airbase, indicate that Assad’s military could eventually collapse before the Caliphate fighters. And this outcome is being facilitated by a second development: Assad appears to be losing support within Syria to justify Moscow’s sticking with him. In this last connection, reports indicate that many in Syria, including some of Assad’s staunchest backers, are now fearful that IS will not only brush aside the pro-American Sunni insurgents, but acquire the capacity to defeat the Syrian Army. As a consequence, facing disaster, Syria’s economic and political elite may look for another leader, preferably someone whom the international community will embrace as a viable alternative to Assad. Thus both Moscow and Tehran might see the wisdom of a stakeholders campaign to crush IS that rests on this game changer.

Turning to the international community, with Assad’s exit, we have the basis for ending the Syrian civil war. Indeed, this may be the quickest way to end the tragic slaughter of Syrian civilians that has prevailed over the past three years.

In conclusion, there has been talk in Washington that the time has come to undertake an international diplomatic campaign to address the issue of Islamic terrorism and other sources of mayhem in the Greater Middle East. A drive to secure the support of major stakeholders to neutralize IS would be a step toward accomplishing this ambitious enterprise. As a start, President Obama must convince Iran and Russia and the growing army of influential people in Damascus—who fear their military will lose the war against IS, or that under Assad, it will go on for years—that there is a way out of the existing chaos. While working with a post-Assad Syrian government may be unthinkable to many in Washington, when taking all of the above into account, its merits are obvious. Yes, it may be fanciful, but the situation in the Middle East is surreal and dealing with the disorder that pulsates there requires thinking outside the box. It certainly is preferable to a new American war—starting small, but rapidly enlarging by the logic of mission creep—in the midst of the turmoil that will roil the region for decades. President Obama should emphasize this pivotal observation in explaining this proposal to the American people, but at the same time indicate that there is no military option that will end the turmoil associated with the civil war within Islam; certainly, the United States should not reengage in substantial military operations akin to our engagement in Iraq and Afghanistan; and in the final analysis, the people who live in the region must ultimately determine their own fate.