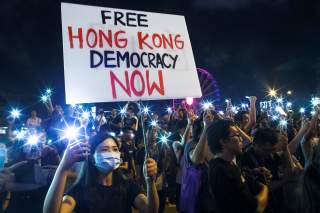 China hawks and human-rights activists are too politically correct on China.

There is nothing wrong with having an ideology or with supporting democracy, but in a high-stakes great-power rivalry, leaders and the public cannot let their vision of the world become distorted on the basis of ideology. Unfortunately, politicians, publishers, lobbyists, and advisors are letting their ideologies blind them in ways that could lead to misguided policies and an increased chance of conflict between the United States and China.

China’s authoritarian system of government benefits its people in some ways and harms them in others. It does allow the government to move forward with wide-ranging projects that grow the economy and bring real benefits to the country and the people. It also allows unchecked abuses of power, allows the government to arbitrarily arrest political activists and shuts down most avenues for people to fight for their rights, even those ostensibly protected by the country’s constitution.

In the 1980s, for example, China aggressively reformed its entire society and economy, moving in a market-oriented direction, albeit still with “Chinese characteristics.” They shut down state-owned factories that had been giving workers jobs for life and privatized farms that had been collectivized, leading to decades of double digit annual growth, and, yes, lifting hundreds of millions out of poverty.

“Smashing the iron rice bowl,” the policy that resulted in the unemployment of millions upon millions of disgruntled factory workers but was nonetheless necessary for the creation of a dynamic economy, would scarcely have been possible in a liberal democratic system. The formerly privileged workers would have revolted at the voting booth, voting for politicians who promised an ongoing free-ride. The policy would have ended after a few years, and the country would have remained impoverished or fallen into a series of repeated coups like Thailand.

There are just facts. However anyone wants to weigh the advantages and drawbacks is up to them. Sen. Ted Cruz, a China hawk, however, would rather distort the history and smear anyone who analyzes the issue through a nuanced prism. Of Sen. Bernie Sanders, he said, “Sure, the Chinese Communists have wrongfully imprisoned & tortured millions, and they have murdered over 65 million people, but Bernie may have a point: when you’re dead, your poverty’s solved, right? #AbsurdLeftistPropaganda."

Bernie Sanders said very factually, "China is a country that is moving unfortunately in a more authoritarian way in a number of directions. But what we have to say about China in fairness to China and it’s leadership is if I’m not mistaken they have made more progress in addressing extreme poverty than any country in the history of civilization, so they’ve done a lot of things for their people.”

If the point that Sanders supports democracy wasn’t clear enough, he added, in the summary of The Hill, that he “‘hoped that they would move toward a more Democratic [sic] form of government,’ and criticized China for ‘moving in the opposite direction.’”

Now one can criticize Sanders for having supported the Sandinistas in the past, but in this case there is no way for an honest person to misinterpret what he says to think he is cheerleading for Beijing. Yet there’s Ben Shapiro’s website, the Daily Wire, which accounts for some of the stories Facebook’s algorithm is most likely to disseminate, publishing a headline accusing Sanders of “pras[ing] Communist China.”

Ben has a saying: “Facts don’t care about your feelings.” But to deny that China’s economic reforms have led to astounding growth that made its citizens better off just because you don’t like their system of government is to deny facts because they make you feel bad.

If anything, a free-market conservative should look at the effects of China’s market liberalization as a rebuke of state-planned socialism. China only lifted hundreds of millions out of poverty by eliminating its program of guaranteed jobs; why does Bernie want to “enact a federal jobs guarantee” that will almost certainly not work?

Radical democracy advocates operating from already developed countries might assert that they would rather be poor and hungry and still have freedom of speech, but human nature and historical evidence suggests that for the vast majority of humanity, health, well-being, and survival are more important than abstract political principles. It’s the hierarchy of needs. South Korea and Taiwan both followed similar developmental paths, from being authoritarian countries, often governed by martial law, that arrested and tortured dissidents, to only become democracies after reaching the level of prosperous middle class development.

Additionally, the protests in Hong Kong have inspired some with passions of spreading democracy to exaggerate American interests in order to push for intervention. Executive Director of the Victims of Communism Memorial Foundation Marion Smith compared Hong Kong to Berlin in USA Today and asserted the U.S. is in “a new Cold War.”

The differences between the Cold War and present-day domestic disputes within China are stark. The administration of Berlin was legally divided between multiple powers. The Soviet Union had invaded and colonized sovereign nations and set up puppet governments in more.

There is no dispute today between foreign governments that Hong Kong is a Chinese territory. It was Chinese territory before Britain signed treaties at gunpoint with China to colonize it. It was Chinese territory after Britain agreed to cede it back to China at the end of its lease. The dispute within Hong Kong at present is over democratic norms and voting rights. The vast majority of Hong Kong’s democracy advocates do not assert independence from China, and, in fact, it is the Chinese state-run media that wants to accuse the protesters of supporting independence in order to tar them.

From the title of the organization Smith runs, there can be no mystery where his ideological sympathies lie. Americans who visit Hong Kong will find the territory’s culture vibrant and the protests exciting. I, too, found Hong Kong to be exciting and after living there for one year, I wrote a guidebook. I wish that it could remain that way forever. But in 2047, its “fifty years of autonomy” may legally come to an end. In fact, they are already being slowly chipped away by Beijing’s increasingly heavy hand. The fight to maintain as much of their rule of law and partial self-governance as possible is in the hands of Hong Kong’s people.

But direct Western intervention would almost certainly backfire. It would give Beijing an excuse to crackdown that would be credible with Mainland Chinese citizens, many countries in the world that are skeptical of Western intervention, and also a significant proportion of Hong Kong’s people. Remember that the pro-Beijing/pro-establishment parties routinely win about 40 percent of the popular vote in Hong Kong elections, and many more of the democrats are moderates who have some sense of patriotic identification with the civilization state of China. For the United States to try overthrow Hong Kong’s government would be to sacrifice Hong Kong’s people for the ideological desires of hardline activists who won’t have to deal with the aftermath.

This is no Cold War. Nor is the United States dealing with Mao’s China. To allow its views to be distorted by ideology and crusading impulses would leave the United States ill-prepared to meet the real challenges posed by its rivals.

Mitchell Blatt is an editorial assistant at the National Interest, Chinese-English translator, and lead author of Panda Guides Hong Kong. He has been published in The Korea Times, Silkwinds magazine, and Areo Magazine, among other outlets. Follow him on Facebook at @MitchBlattWriter.