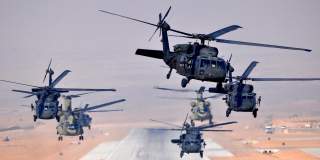 It is a truth universally acknowledged that a conflict in possession of no military solution must be in want of more troops. Or so one would think from the recommendations on how to succeed in Afghanistan made by Gen. John Nicholson, the force commander in Afghanistan; Gen. Joseph Votel, commander of Central Command; and Republican senators John McCain and Lindsey Graham. More troops with “greater authorities” will “break” or “end” the stalemate that all agree exists. “Greater authorities” means putting U.S. troops back in direct combat with the Taliban and authorizing them to risk killing more Afghan civilians.

More troops may shift the terms of the stalemate slightly and make it last longer, though it will probably last as long as the United States wants to pay for it. With or without more troops, under the present strategy, the U.S. commitment would have to be eternal, because it does nothing to mitigate the geopolitical conditions that created an enabling environment for global terrorism in the Afghanistan-Pakistan border region and which can be addressed only by political means. Terrorism is not caused by the existence of “terrorists,” and killing “terrorists” does not eradicate terrorism. The United States may define counterterrorism as its core interest in the region, but both those we label terrorists and those fighting them have political objectives rooted in the history of their societies. The Taliban were a product of the decades-long collapse of the Afghan state under the pressure of Cold War and regional rivalries. Al Qaeda, a product of the Arab world, developed in the ungoverned space created by war and support for, first, Afghan mujahidin fighting the Soviet Union and then the Taliban. The Islamic State, a product of the U.S. invasion of Iraq, has gained a foothold in Afghanistan by exploiting these same conditions.

Afghanistan has not been able to recover from the collapse of its state triggered by the 1979 Soviet-Afghan war, because the conflicts and shaky governments that followed could not address the core problem: Afghanistan is a landlocked state whose economy, ranked 172 out of 184 countries in gross domestic product per capita by the International Monetary Fund, cannot pay the cost of governing or defending a population scattered in enclaves separated by deserts and mountains. Since its demarcation in its current borders by the British and Russian empires at the end of the nineteenth century, the Afghan state has needed foreign subsidies to survive, and foreign subsidies—and troop deployments—extend the reach of the power that provides them, regardless of its stated objectives.

When a foreign power, whether British Empire, the Soviet Union, or the United States, supports a state and its army, its enemies and rivals may feel threatened. Afghanistan was stable, first, when the British and Russian empires agreed that the British would subsidize a strong centralized state; that this state would submit to British control of its foreign relations; and that the two great powers would not use Afghanistan to challenge each other’s spheres of influence in Persia (Iran), Bukhara (Central Asia) and India. During the first half of the Cold War, the United States and USSR, despite their global antagonism, worked out a modus vivendi in Afghanistan, under which each supported different sectors of the state and worked in different areas of the country. It was not difficult to maintain this agreement as long as the stakes in Afghanistan were relatively small.

That Afghanistan is landlocked has two additional consequences. First, support for Afghanistan by an offshore power like the United States requires the cooperation of neighbors with direct access to international waters or airspace, in this case Pakistan, Iran or Russia, which controls offshore access to Central Asia. Second, growth of Afghanistan’s economy requires cooperation with those and other neighbors for access to international investments and markets.

Given current U.S. relations with Iran and Russia, U.S. access to Afghanistan depends on the cooperation of Pakistan. That dependence is no less real for being problematic: Pakistan provides a safe haven for the Afghan Taliban leadership to pressure the United States and the Afghan government over the Indian presence in Afghanistan and Afghan claims on Pakistani territory. Many U.S. and Afghan analysts argue that pressure on Pakistan to abandon the Afghan Taliban is the solution to the Afghan conflict. As long as U.S. forces and personnel are in Afghanistan, however, U.S. logistical dependence on Pakistan places limits on how much Washington, DC can pressure Islamabad, Measures like sanctions, designation as a state sponsor of terror, cross-border attacks, or cancellation of bilateral assistance could lead Islamabad to cut U.S. supply lines. As long as U.S. relations with Russia and Iran preclude transit through those countries, the United States is stuck with Pakistan.

When Pakistan closed the military supply lines after a series of incidents in 2011, the United States supplied its forces in Afghanistan through Russia and Central Asia. It cannot do so now, and transit through Iran remains impossible. Pakistan is also better situated to resist U.S. unilateral pressure than before. As a result of Chinese construction of the China-Pakistan Economic Corridor (CPEC) linking China’s western Xinjiang province to the Pakistani port of Gwadar on the Arabian Sea, Pakistan and China are closer than ever. China does not support Pakistan’s policy of sheltering the Taliban and would like to help the United States stabilize Afghanistan, but not through a confrontation with Pakistan. Russia and Iran have also grown closer to Pakistan as Indian prime minister Narendra Modi has strengthened ties with the United States.

Regional developments are more favorable to Afghanistan’s economic growth than ever, but political obstacles, including those posed by the U.S. presence in Afghanistan, hinder realization of the potential. Chinese president Xi Jinping has made the “One Belt, One Road” initiative, a program of investment in regional infrastructure and connectivity, including CPEC, the signature project of his term. Xi has allocated $160 billion to the initiative’s first stage, including $46 billion for CPEC. The most direct way for Afghanistan to reach world markets would be a link into CPEC in Pakistan and onward to China, India and the Indian Ocean. Pakistan, however, periodically closes the border with Afghanistan to pressure Kabul and has not permitted transit between India and Afghanistan. Most recently, Pakistan closed the border for over a month, from February 16 to March 20, except for two days that allowed stranded people to return home. Islamabad shut the border in reprisal for attacks inside Pakistan that it blamed on terrorists based in Afghanistan. This closure, aimed at Afghanistan rather than the United States, did not affect U.S. military and other supplies, but such closures could in the future, as in 2011.

Afghanistan hopes to find an alternative route to the world market through tripartite cooperation with India and Iran. Japan joined the consortium in January 2017. India, Iran and Japan are developing the Iranian port of Chabahar on the Arabian Sea. From there Iran has built both a rail line and a road to the Afghan border. India has built a highway linking the Iranian road to Afghanistan’s ring road. A tripartite transit agreement among India, Iran and Afghanistan enables Afghanistan and India to circumvent Pakistan’s closed border by trading through Chabahar and provides Afghanistan with duty-free access to that port’s facilities. Indian investors have been developing industrial parks around Chabahar, aiming for the Afghan, Iranian and Central Asian markets. Additional U.S. sanctions on Iran, however, as promised by President Trump and Congress, would block contracts to develop Chabahar. U.S.-Iranian hostilities could lead to Iranian retaliation in Afghanistan, possibly closing that border as well.

The multiplicity of regional actors makes it more challenging to reach consensus about who should stabilize Afghanistan than it was in the days of the Russian and British empires or the U.S.-Soviet Cold War. The countries of the region distrust not only each other, but also the United States. Though the U.S. military presence and financial support have stabilized the post-Taliban government to a certain extent and prevented the large-scale return of terrorists, Afghanistan’s neighbors fear that the United States could use the bases it has built against them. Russia claims that the basing and logistical infrastructure the United States has built in Afghanistan would enable it to surge up to one hundred thousand troops there to intervene in the region. Iran has similar concerns, which the administration’s rhetoric can only intensify.

The higher economic stakes in the region also present diplomatic opportunities. The regional economic transformations set off by the growth of the Chinese and Indian economies are raising the cost of Afghanistan’s stalemate to its neighbors. Together with concerns about the Islamic State, which has claimed responsibility for three large massacres of civilians in Kabul in the last few months, opposition to long-term U.S. bases in Afghanistan has led to a strategic convergence between Russia and Iran. Despite their historic hostility to the militant group, Iran and Russia have also opened channels of communication with the Taliban. All three share opposition to both Islamic State and the U.S. presence, and are looking for a way to stabilize the region without a U.S. military presence. China, which sees stability in Afghanistan as essential for its economic plans, has also hosted the Afghan Taliban several times. In July 2015 it participated in an abortive round of Pakistani-sponsored peace talks together with the United States, the Afghan government and the Taliban.