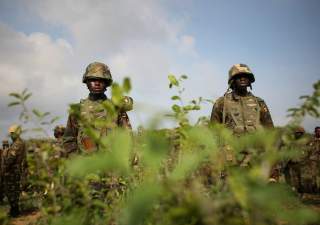 Somalia is synonymous in the American lexicon with death, destruction, anarchy and humanitarian calamity. The “Black Hawk down” disaster that resulted in the slaying of eighteen elite U.S. soldiers may have occurred over twenty-three years ago, but the image of an American soldier being dragged in the streets by Somali warlords in Mogadishu is still an iconic one in American military history. The operation has been studied in U.S. military academies as an example of how not to perform a special-operations mission.

The Horn of Africa nation with the long coastline, however, may be rising in importance in America’s seemingly never-ending war against terrorist groups around the world. U.S. defense officials are reportedly lobbying for a more aggressive pace of operations against the al-Shabaab terrorist group, an organization was only a few blocks away from overrunning Mogadishu's government district in the first term of the Obama administration.

The current rules guiding U.S. operations in Somalia place strict limits on when military force can be used, such as when Somali forces are at risk of being overrun by Shabaab units or if the Somali security forces request assistance during a firefight. The Pentagon is exploring a set of authorities that would expand those rules of engagement to widen the scope of when airstrikes can be called. Shabaab targets that could only be attacked if they made were close to taking a strategic position on the battlefield, according to the report, could now be preemptively hit if it looks as if a terrorist operation is about to be conducted. In addition, U.S. special forces and advisers may be permitted to accompany Somali troops to an objective rather than just flying them in and then pulling out.

While these discussions may be surprising to some, they are in actuality the latest step in a covert counterterrorism campaign in Somalia that began immediately after 9/11. There is nothing new or unordinary for U.S. special operators to be planning and executing counterterrorism missions on Somali soil or in Somali airspace; indeed, over the last sixteen years, helicopter-borne raids on select terrorist leaders, drone strikes on Shabaab training camps, and intelligence advisory support to African Union and Somali forces have all been the norm. The Bureau of Investigative Journalism has traced the first publicly reported U.S. counterterrorism mission in Somalia to 2003, when a “team possibly including U.S. commandos” snatched Al Qaeda suspect Suleiman Abdallah from his hospital bed and transported him outside of the country for detention and interrogation.

As the years went by, the U.S. kept a stealth footprint in Somalia, but used a greater amount of firepower as the campaign intensified as more Al Qaeda–affiliated terrorists, facilitators and suspects were eliminated. In 2008, a U.S. missile strike killed Aden Hashi Ayro, a terrorist operative whom U.S. intelligence officials were tracking for weeks. In 2009, U.S. helicopters strafed a car in the Somali countryside carrying Saleh Ali Saleh Nabhan, a twenty-eight-year-old who was wanted by law enforcement for a suicide attack on a beachside hotel and on an Israeli airliner in Kenya. U.S. special operators stormed the Somali beach in 2013, in a mission designed to snatch the ringleader of the Kenya Westgate Mall attack, which killed over sixty-five people (that operation was aborted once the resistance was heavier than expected). And just last year, the U.S. killed 150 al-Shabaab militants in what was believed to be a training camp in northern Somalia. Days later, a joint U.S.-Somali force raided an al-Shabaab target.

Add America’s drone network in Ethiopia, Djibouti and Somalia to the mix, and one can see that the anarchic Horn of Africa nation has been and remains in the crosshairs of the U.S. counterterrorism community.

Granting more tactical authority to AFRICOM, though, is only a part of the puzzle that is counterterrorism in Somalia. Al-Shabaab may no longer be controlling Somalia’s major cities, but the group is still prevalent in the countryside, using its terrain to continue its training efforts. Suicide attacks in Mogadishu and on African Union military positions continue to occur with relative frequency. As long as Somalia’s security forces are riddled with poor training and corruption and as long as its political institutions lack the capacity to govern outside of Mogadishu, it will be impossible to stop the type of large-scale, headline-grabbing terrorist attacks that al-Shabaab have perpetrated in the past. Somalia is still a country torn apart by civil war, where no party holds a monopoly on violence. It will take generations of involvement from Somalia’s neighbors and tens of billions of dollars from international donors over a long period of time for that situation to change.

Counterterrorism raids and airstrikes on al-Shabaab militants are fine. But the United States should be spending just as much time convincing the African Union to extend its peace enforcement mission in Somalia beyond the December 2020 pullout date. It would also be prudent for the Trump administration to lobby its European partners to maintain the considerable financial assistance that the European Union has provided to the African Union mission since the AU mission in Somalia was authorized in 2007. Without international donor support, it will be impossible for the African soldiers who are responsible for battling al-Shabaab and building a Somali army and police force to continue their work.

The last thing America needs to do is see an AU mission pull out prematurely, watch the security situation deteriorate, and ask officials in the Pentagon to once again increase America’s military involvement in Somalia.