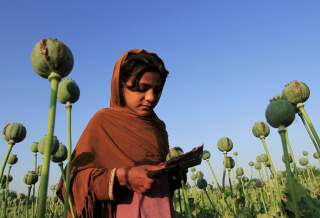 As if the United States needed more evidence that its sixteen-year mission in Afghanistan is an exercise in futility, a new United Nations report provides an additional reason for depression. The 2017 Afghanistan Opium Survey from the UN’s Office on Drugs and Crime, released on November 15, confirms that Washington’s effort to curb illicit narcotics trafficking in the country has failed.

Almost every aspect of the report contains bad news. Overall opium production reached nine thousand metric tons, compared to 4,800 tons in 2016. That was a record level since the UN began keeping statistics on the product in 1994. Some 328,000 hectares were used to grow poppy (the source of opium), an increase of nearly 50 percent from the previous record set in 2014. Poppy cultivation also spread to provinces that were previously free of such cultivation. That development means that twenty-four of the country’s thirty-four provinces now are directly involved in illicit drug production. Despite a 14 percent drop in price per unit, the overall value of the crop increased by 55 percent because of the sheer overall volume. An evaluation of the UN report from the Afghan Analysis Network aptly concluded that opium is “a low-risk crop in a high-risk environment.”

Indeed, the drug trade is a crucial part of Afghanistan’s economy, both in regions that the Afghan government controls and in Taliban-dominated regions. The Kabul government estimates that at least three million farmers make their living from that crop. In a desperately poor country, such income is often the difference between a decent lifestyle and destitution. U.S. leaders face a hopeless dilemma. If they press the government of President Ashraf Ghani to increase eradication efforts, then that move will alienate beleaguered farmers and drive them into the arms of the Taliban. Yet doing nothing risks intense condemnation from Russia and numerous other drug-consuming nations in Europe and elsewhere. Acceptance also leaves in place an important source of revenue for the Taliban.

It would be a mistake, however, to conclude that the Taliban is the only financial beneficiary of the opium trade. Key officials in the Kabul regime, both under Ghani and his predecessor, Hamid Karzai, have profited handsomely from that commerce. Cynical Afghans have noted the opulent mansions that government officials and their cronies build in Kabul’s best neighborhoods, derisively calling them “poppy palaces.”

An especially disappointing example of President Trump’s multi-front retreat from the foreign-policy realism that he seemed to embrace during the 2016 presidential campaign was his decision to perpetuate the U.S. military intervention in Afghanistan. The mission made sense in the immediate aftermath of the September 11, 2001, terrorist attacks on the United States. The target of that intervention was Al Qaeda, the organization responsible for the 9-11 atrocity. George W. Bush’s administration made the Taliban an additional target of U.S. military wrath only when that government refused to turn over Al Qaeda leaders and no longer give the terrorist group sanctuary in Afghanistan.

The mission of disrupting and degrading Al Qaeda was accomplished long ago. Any lingering justification for staying in Afghanistan ended when U.S. forces killed Osama bin Laden. Ousting the Taliban regime in late 2001 as part of the initial military offensive was sufficient punishment for its role in protecting and enabling Al Qaeda. Despite its odious, reactionary nature, the Taliban’s political agenda always has been confined to Afghanistan. It is not a terrorist organization with international reach.

But instead of proclaiming victory and withdrawing U.S. forces from Afghanistan, Washington has transformed the objective into an endless nation-building mission to keep the corrupt Kabul regime from losing power to the Taliban. In the process, the United States has expended more than $1 trillion and sacrificed more than 2,400 American lives. And now U.S. leaders face the prospect of intensifying an inherently unachievable war on drugs in Afghanistan.

The absurdity of the Afghan mission was highlighted in late November when B-52 bombers and an F-22 fighter launched attacks on opium labs. Both were weapons systems designed to protect core American security interests against dangerous adversaries. They were never intended to be part of a quixotic crusade to blast drug trafficking targets in rural Afghanistan. Misusing tax dollars and expensive military hardware for such purposes would be humorous if it were not so pathetic.

Escalating the drug war in Afghanistan is just one more indicator of the bankruptcy of Washington’s overall policy regarding that country. President Trump should return to the negative opinion that he expressed about the Afghan intervention during his bid for the presidency. He foolishly allowed Secretary of Defense James Mattis and other advocates of the existing policy to dissuade him from withdrawing U.S. troops and terminating the futile mission. The latest data on the drug trade and its lucrative financial benefits for both sides in the civil war gives Trump another chance to correct his error and end the folly of Washington’s Afghan crusade.

Ted Galen Carpenter, a senior fellow at the Cato Institute and a contributing editor at the National Interest, is the author of ten books, including several books on the war on drugs. He is also the author of more than seven hundred articles and policy studies on international affairs.

Image: An Afghan girl gathers raw opium on a poppy field on the outskirts of Jalalabad April 28, 2015. REUTERS/Parwiz